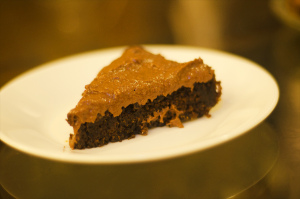 This past Saturday was my brother’s birthday and he wanted something chocolatey. So I decided to vary my favourite chocolate cake recipe (predictably, Pakhi Masi introduced me to this recipe). The reason I love this recipe so much is because it’s perfectly moist and soft. I variate the basic recipe quite often to suit my craving! This time, I wanted a little more kick to it, so I brought in fresh brewed coffee and nutella!

Since getting the cake is a bit of a precise science, I’m going to add a lot of tips which might be useful to beginners. But don’t be alarmed. The science is actually pretty easy, as long as you keep a few things in mind.

Firstly, if you are inexperienced, then don’t modify recipes. The proportions play an important role in how the cake will fare.

Prepare the cake tin. Use a big rectangular (11-12″) pan. I forgot mine at my Mom’s on her birthday the previous week so I had to use 2 x 8″ round pans. Ideally you should line the pan with parchment/butter paper cut to fit the pan – bottom and sides. Makes it very easy to get the cake out. But I didn’t have any so I proceeded to the next step. Using your fingertips, spread a nice blob of soft butter to coat the entire pan.

Then sprinkle a tsp or two of flour on it…

Then shake the pan about very well so that all the butter is coated in a thin layer of flour. Turn the pan upside down and give it a tap or two to shake out the excess flour (that didn’t stick). It should look like this…

Keep the pans aside while you prepare the batter. First step – measure out the flour, cocoa, salt, baking powder and baking soda.

Sift them together 3 times using a sieve/ atta chhanni. Doing this atleast 3 times is very important as it helps to mix the salt, baking powder and soda with the flour very well, which is important if you want the cake to rise. I paid quite highly for not taking this step seriously in my earlier days!

When it’s all mixed up and uniform, it will look something like this…

In a mixing bowl (sadly, I didn’t have a prettier one), put the ground sugar.

Yes I can see the flecks of cocoa in it. I wasn’t being very careful. Not that it matters cos it’s all going to get mixed up anyway 🙂

Add the flour mix to the bowl and mix up all the dry ingredients, with a wooden spoon or the hand mixer.

Make a well in the centre and crack in the eggs…

Measure and add the milk…

I’m waiting for the day that I can afford to buy pure vanilla extract (on a regular basis) since this synthetic stuff is the pits. Or alternatively, I might try making some of my own. I read a method somewhere and it might be worth a try! Until then, Bush Vanilla it is 🙂

Now using a hand mixer, beat on medium for 2 mins. At this point, it’s very important to hold the bowl firmly and decide whether you like clockwise or anti-clockwise. Pick your direction and only move the mixer in that direction. I don’t know the science behind this, but the basics of cake baking insist that the batter be mixed in one direction only.

It should be of dropping consistency, i.e. if you were to take a spoon of the batter and drop it on a plate, it would drop in a blob and not pour/run from the spoon to the plate.

Now add the hot coffee, and mix until just combined.

Now it will be of pouring consistency. Yes, this cake batter is much thinner than other cakes.

Pour into the prepared pan… Bear in mind that a cake tin must never be more than 2/3 full as the cake needs space to rise. If you over-fill the pan, it will just spill all over the bottom of your oven and make a huge burnt mess.

Place in the oven (right in the middle of the overn – horizontally & vertically) and bake for 30-40 mins or until the cake shrinks slightly from the pan and a toothpick inserted into the middle comes out clean, with no batter/crumbs clinging to it.

The trick with baking in 2 pans simultaneously is, never place them side by side. Place them on 2 racks one on top of the other and then switch them halfway through. i.e. bring the one on the top rack to the one at the bottom and vice versa.

While the cake is baking, make the frosting (instructions below) and pop into the fridge until you are ready to frost.

Remove the pan from the oven and set on the counter to cool for 15 minutes. Run a knife between the cake and the pan to loosen it. Place a plate on top of the cake pan/tin and, holding it firmly in place, flip the tin and the cake should land on the plate. Remove the pan and place another plate on the upturned cake. Do a quick flip again to have the cake right side up. Let it cool completely before frosting it or the frosting will become runny/ melt.

For the frosting, you need:

1 cup ground sugar (you can also use icing sugar which has some cornflour mixed in it and helps hold the frosting better. I just use normal sugar)
1 cup Nutella (which is almost the entire bottle)
5 tbsp softened butter
1 tsp vanilla essence
1/4 tsp salt (only if you are using unsalted butter, which I didn’t)
1/3 cup cream

Place the first five ingredients in a mixing bowl…

Scrape that bottle clean, as you can see I managed to pour out a little less than a cup…

Use the mixer to blend the ingredients till well mixed. It will be a little crumbly.

Add the cream and mix… Just until smooth and creamy. No need to beat for too long.

At which point the bell rings to announce the unexpected arrival of my cousin, resulting in the loss of a few critical shots…

Anyway, once the cake has cooled, used a butter knife or the back of a spoon (if you don’t have an icing spatula) to spread the frosting on top and on the sides of the cake. I could have stacked the 2 cakes with frosting between them and on top, but chose to frost them as 2 seperate cakes since we needed more slices.

PS – I could have individually smacked all of Adit’s friends who wasted my precious frosting on his face. Sigh! Such a waste of chocolate hazlenut yummy-ness 🙁