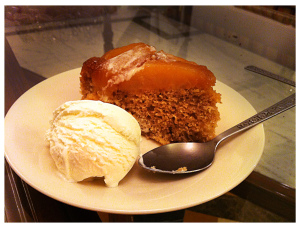 So this past Friday was my Dad’s birthday. Since AK & I were both under the weather, we   couldn’t manage his gift & cards on time. But I couldn’t bear to go without a cake. Having made Lemon & Orange for my Mom, Mocha & Nutella for Adit (my brother), I decided to find a new Apple Cake recipe! (And yes, if you haven’t noticed, July is full of birthdays in my family – including mine!)
Getting back to the subject, my old and trusty apple cake recipe wasn’t very inspiring on that particular day. Hunting around in my downloaded and saved stash, I found this recipe from Simply Recipes.
I modified it a little, but it still had the desired effect. It helps that my Dad loves anything with apple and cinnamon in it. Also, his darling daughter can do no wrong!
The main reason I modified it is because the original recipe calls for cornmeal (makki ka atta). In this season, my local grocer had none. And I had no time to go to chakki. So I substituted the cornmeal quantity with more flour, maintaining all the other ingredients & quantities. Oh and I also added cinnamon. For me, no apple dessert is complete without it!!
I then used the method that I use for my Hershey’s cake (modified in this blog as Rich Mocha Cakewith Nutella Frosting).
PS – If you need any more convincing as to why you should bake an apple cake, here’s why apples are so good for you!

First I lined my 9” round cake tin with butter paper. I couldn’t get my hand on parchment paper last weekend, so I bought butter paper instead. Seems to work just as well.
(For absolute beginners, invert the tin on butter paper, trace the shape and cut with a scissor. Then press it down at the bottom of the tin so that approx 1” comes up the side of the pan).

I then drizzled some melted butter on the paper and spread it with my fingers. Ensure the paper and the sides of the tin are well greased. The paper will stick to the pan nicely.

I then turned on my oven to 150 C/ 350 F. It was then time to caramelise the apples! Yummy!
I peeled the apples and cut each into 8 wedges. That is, quarter the apple and then halve each piece. (I unsuccessfully racked my head to think of the word for this)!!

In a non-stick skillet, I added the 2 tbsp of butter and allowed it to melt on medium heat.

Then I added the granulated sugar.

I gave it a stir with a wooden spoon to mix up the sugar and butter.

I continued to heat it on medium, avoiding the urge to stir until it slowly melted and mixed further with the butter. I occasionally swirled the pan around rather than use the spoon too much.From all I have read, stirring too much is disasterous for caramel.
Eventually it started to brown and look like this…

I gave it one last stir and dumped the apples in the mix. The sugar/ caramel will seem to clump up, but don’t worry. It will sort out!! Just give it a good mix to coat the apples with as much of the clumpy goo as you can…

I covered and cooked the apples on medium heat for about 6-7 minutes. The apples start giving out their juice. The whole mixture became all juicy with a fair amount of liquid in the pan. The clumps disappeared.

I then cooked these without the lid until the liquid/ caramel thickened and coated the apples nicely. I got a little impatient and increased the heat a little. It took about 9-10 minutes for this to happen. Then I poured these into the prepared cake tin and allowed it to settle while I got the batter ready.

For the batter, I measured and placed the flour, baking powder, salt & cinnamon in a sieve/ atta chhanni.

I sifted them together THREE times. As explained before, this ensures that the baking powder blends evenly with the flour (for even rising of the cake) and allows air into the mix (also essential for the cake to rise).

I placed this mix in a bowl along with the ground sugar. I made a well in the centre and cracked the eggs into the well. (I hope you remember that the eggs should be of room temperature. Or at least taken out of the fridge half hour before beginning).

I then added the melted butter and milk.

Gave it a brief mix. Another reminder: beat/ mix cakes ONLY in one direction. Take your pick of clockwise/ anti-clockwise.

Added the vanilla and mixed it some more – As an after-thought, since I had included cinnamon in the recipe, I could have omitted the vanilla. No need for both. (The original recipe didn’t have cinnamon).

(Yes I know this Vanilla “Essence” sucks and I promise to find/make better and authentic vanilla extract soon.)

The batter was of dropping consistency (thick-ish so it should drop in a “blob”), like this:

I then added the boiling water and mixed again, just until all combined. It was now a much thinner batter, like this:

I poured this batter over the apples in the cake tin and popped it in the oven for the recommended 40 mins. (Give the tin a gentle shake so that the batter spreads evenly over the apples and seeps into any gaps between the apples).

After 40 mins, I poked the centre of the cake with a knife (because this was an upside down cake. Normally, I would have used a toothpick so that no noticeable marks were left!). For the first time ever, a cake was ready at the EXACT time recommended. 40 mins flat. Knife emerged absolutely clean, i.e. batter and crumb free, from the centre of the cake.

I let it cool for 10 mins. Ran a knife around the sides (between the cake and the pan). Placed a plate over the tin and inverted the tin. The cake plopped out onto the plate, after which I carefully peeled off the butter paper to get this:

Got my dad to cut the cake and then finally got my very own slice, with a scoop of vanilla ice-cream (although it was almost suicidal to attempt the ice-cream with an already sore-throat!!).

I say it was worth it!!
« Sunday-Indian Lunch Menu
Lemon & Orange Cake with Marmalade Topping »