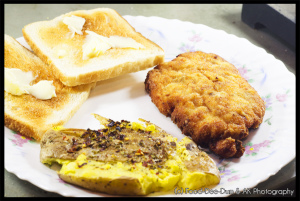 There are times when I’m super late from work. Times when a long, drawn out, complicated recipe does not work for me. And other times when I want (non-junky) Junk Food! Read: Junk Food made at home!!
At any of the above times this chicken is the most awesome thing to make. Or at any other time when AK has a KFC (but better) type craving and MUST have fried chicken. This is what he craves.
Anyhow, here’s what I used
(for 1 person, AK. Although I love this chicken, I had a terrible cold and needed a big glass of spicy Rasam to make me feel better!)
2 boneless chicken breasts
2 tbsp cream/ top-of-the-milk/ malai
2-3 cloves garlic, crushed/ minced
1 tsp chilli flakes/ powder
1 tsp dried parsley
Salt & fresh ground pepper to taste
1 egg
1/2 cup breadcrumbs
2 medium sized potatoes
Olive oil
Salt & freshly ground pepper
1 tsp dried oregano
I placed the chicken breasts on my chakla (roti rolling stone) and hammered them with a meat tenderiser. The flatter and thinner it becomes, the faster and better it cooks. Oh and before I bought this tenderiser, I used to use my belan (Indian rolling pin). It works just as well!

Then I mixed up the top-of-the-milk with the garlic, salt, pepper, chilli flakes & parsley.

Using my potato masher, I gave them one good press each to flatten them out.

I gave them a generous drizzle of olive oil and sprinkled the salt, pepper, oregano & chilli flakes on them. You can even add some crushed garlic if you like, but I ran out…

Then I popped them in the oven (pre-heated at 150 C/ 350 F) for 15 mins while I made the chicken.
I placed a non-stick pan on the stove. I added enough oil to shallow fry the chicken and heated it on high flame.
I lightly beat one egg and poured it onto a plate. I also placed the breadcrumbs on a plate.

Then I dipped the chicken breasts, one at a time, in the egg to coat well on both sides.

I then placed it in the bread crumb plate…

Carefully flipped it a few times to coat really well…

Then I put them in the hot oil and lowered the heat to medium so as to give them time to cook evenly, through and through.

After about 3-4 mins, I lifted the one of them slightly to check. It was golden brown. So I flipped them both on to the other side…

Another 3-4 mins on this side and we were home free!!!