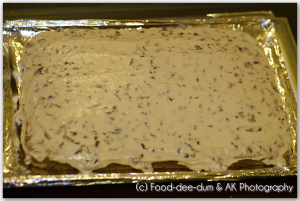 My Masi (maternal aunt) called me on Friday to ask me for the carrot cake recipe I used to use. It reminded me that it has been over a year & a half that I had made it myself. Having been invited for dinner to the home of AK’s colleague, it presented the perfect opportunity to bake this cake and take it for dessert! The original recipe is from an old edition of Australian Women’s Weekly Magazine but I have modified it slightly to my liking.

So here’s what I used:

Then I sifted the flour, baking powder, baking soda and cinnamon together, THREE times! I kept this aside till I needed it. 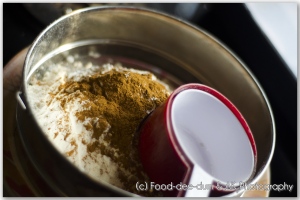 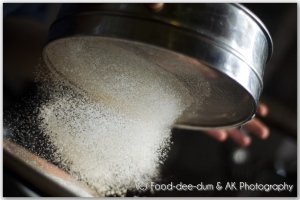 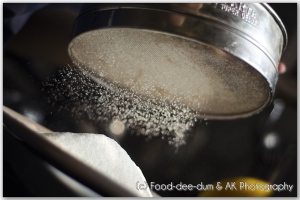 I grated the rind of the orange. Can you see how finely it gets grated? And the white, bitter pith of the orange remains untouched…? I told you that the Microplane zester changed my life 🙂 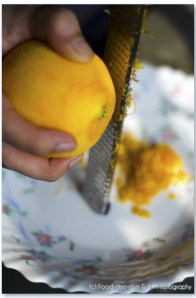 In a mixing bowl, I placed the butter, sugar & rind and beat with a hand mixer on medium speed for about 2 minutes. It’s time to stop when it’s creamy and fluffy. 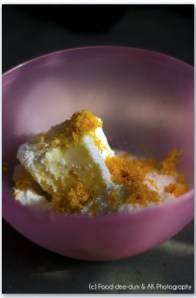 I then added the eggs and honey (original recipe calls for golden syrup but my options at home were honey or maple syrup) and mixed it up for another 10-15 secs.

It’s now time to put the hand mixer away and take up a rubber spatula or wooden spoon. No more beating after this point, just gently folding and mixing.
I added half of each – the carrots, milk & flour mixture. I gently mixed it up with my spatula (in one direction only. I prefer clock-wise!) 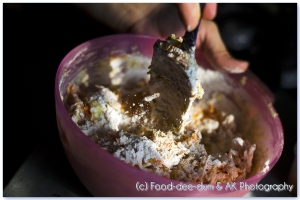 I then added the other half of all the above and mixed it up. 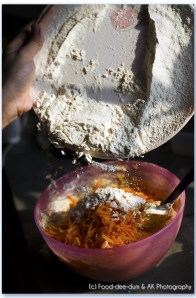 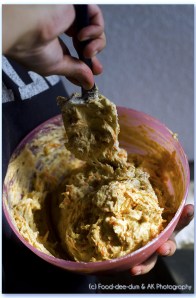 I poured the mix into the prepared pan. As you can see, the batter is pretty thick. I spread it out a little so that it sat evenly in the pan. I popped it in the oven for about 40 mins. 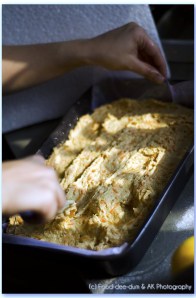 After 40 mins, I tested it with a toothpick which came out clean. I removed it from the oven and allowed it to cool in the pan for about 20 mins. After it had cooled sufficiently, I took it out of the pan (by carefully pulling it out using the longer edges of the butter paper) and placed it on a tray. I allowed it to cool completely before frosting it.

While the cake was cooling, I made the frosting.

1 x 400 ml tub of yoghurt/ curd/dahi (original recipe calls for a 185 gm pack of cream cheese, which is definitely the better and more authentic option. I just didn’t have the time to run to the specialty store, so I modified)
½ cup softened butter
400 gms icing sugar
1 tsp vanilla essence
½ cup chopped pecans (you can use walnuts or no nuts at all)

I hung the curd in a cheesecloth at about 9 in the morning, leaving it be until about 5 pm when I made the frosting.
I placed the butter, sugar & hung curd in a bowl… (Can you see how thick & creamy the curd looks?!?!?) 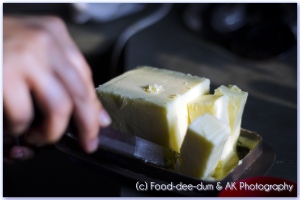 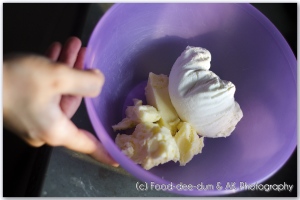 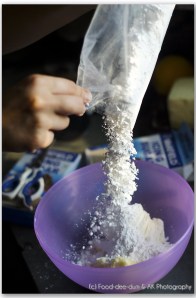 I whipped them with a hand beater until smooth, creamy and fluffy. 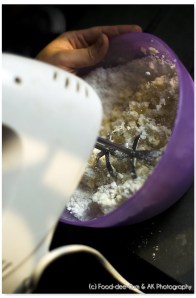 I added the vanilla essence and gave it a quick mix. Then I retired the mixer and switched to the spatula.

Lastly, I added the pecans, mixed it well and chilled it in the fridge until I was ready to frost!! 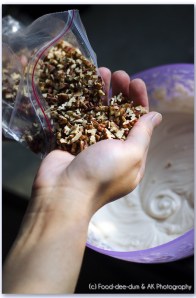 Since, for the life of me, I can’t find my icing knife, I used my spatula and the butter knife to spread the frosting as evenly as I could on the cake…

Quick notes about this recipe: