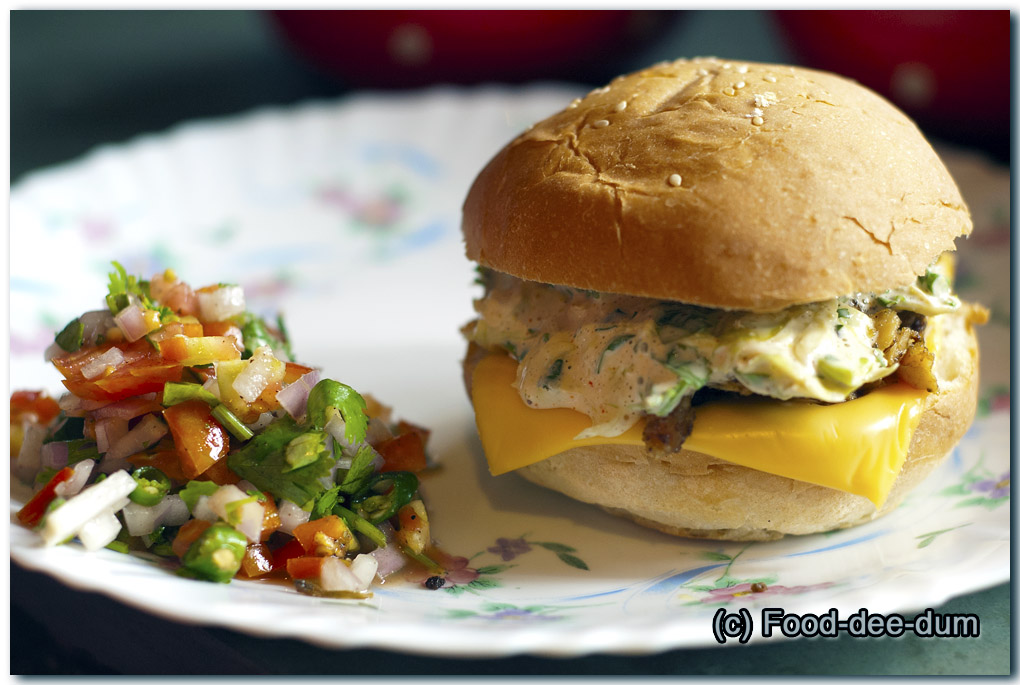 Bearing in mind my current basil obsession and a FRESH batch of pesto, I just HAD to do something with it! So I decided on pesto chicken sandwiches for lunch – with cole slaw and pico de gallo (because I’m not a big fan of mayo! Yes, shocking, I know!!)

Fulfilling, comfort food it is, I promise!!!

Coleslaw:
1/2 cup cabbage, grated or sliced very finely (if you can get your hands on purple cabbage, then use half green and half purple)
3 tbsp mayonnaise
2 green chillies, chopped finely
3 tbsp chopped cilantro
1/4 tsp red chilli powder
1/2 tsp mustard powder
Juice of half lemon
Salt & Pepper to taste

Firstly, I washed and cleaned the chicken.

I placed these in a zip-loc bag with the pesto and shook it around. I know it looks a bit gloopy, but that’s because of the cheese…

While this was marinating in the fridge for half hour, I finished all the chopping for the coleslaw and the pico de gallo! Then I heated a non-stick pan on high heat and sprayed some PAM on it (you can use the Saffola spray or simply a tsp of vegetable oil). At this point I kicked myself for not having bought a much coveted grill pan by now! A wok and a good grill pan are on my wish-list, in case anyone is taking notes for gifts in the near future! Anyhow, point being that since the marinade has oil in it and the thigh lets out enough fat AND the pan is a non-stick, very little oil will do. I placed the chicken in the hot pan…

Lowering the heat slightly (between medium and high), I covered and cooked the chicken, flipping every 6-7 minutes.

Totally, it took about 12 minutes on each side – approx 24 mins total. If I had used boneless, skinless chicken as originally planned, it would have taken half the time! But the advantage of this was that it was juicier. It’s done when the inside isn’t pink anymore (poke it with a fork to check) and the outside is nicely browned. I let it it charr a little because that’s how I like it!!

I took the pieces off the pan and shredded the meat off the bone, using 2 forks. (If you use the breast, then just slice thinly).

Place a cheese slice on each of the halved burger buns and place it in the oven to toast for 5 mins. While they’re toasting, mix together the coleslaw and pico de gallo.

For the coleslaw, I placed the cabbage, green chillies, mayo, salt, pepper, mustard in my measuring cup (I have no idea why I always make coleslaw in the cup!!).

Before I added the cilantro and lemon juice, I admired the cilantro for a minute. It brings such joy to my heart!! I don’t know whether it’s an “Indian” thing or a PK thing!!

Then I mixed it all up and transferred it to a bowl.

I also mixed up all the pico de gallo ingredients and put it in a bowl. Now to assemble the sandwich…

Place the toasted, cheese-d bun on a plate…

Add half the chicken…

And finally, the pico de gallo! AK likes it on the side, but I put it IN my bun before sealing it and wolfing it down in under a minute (kidding. I cannot possibly eat at such an impossible speed!!)

There you go… Perfectly easy and flavourful sandwich for lunch!!