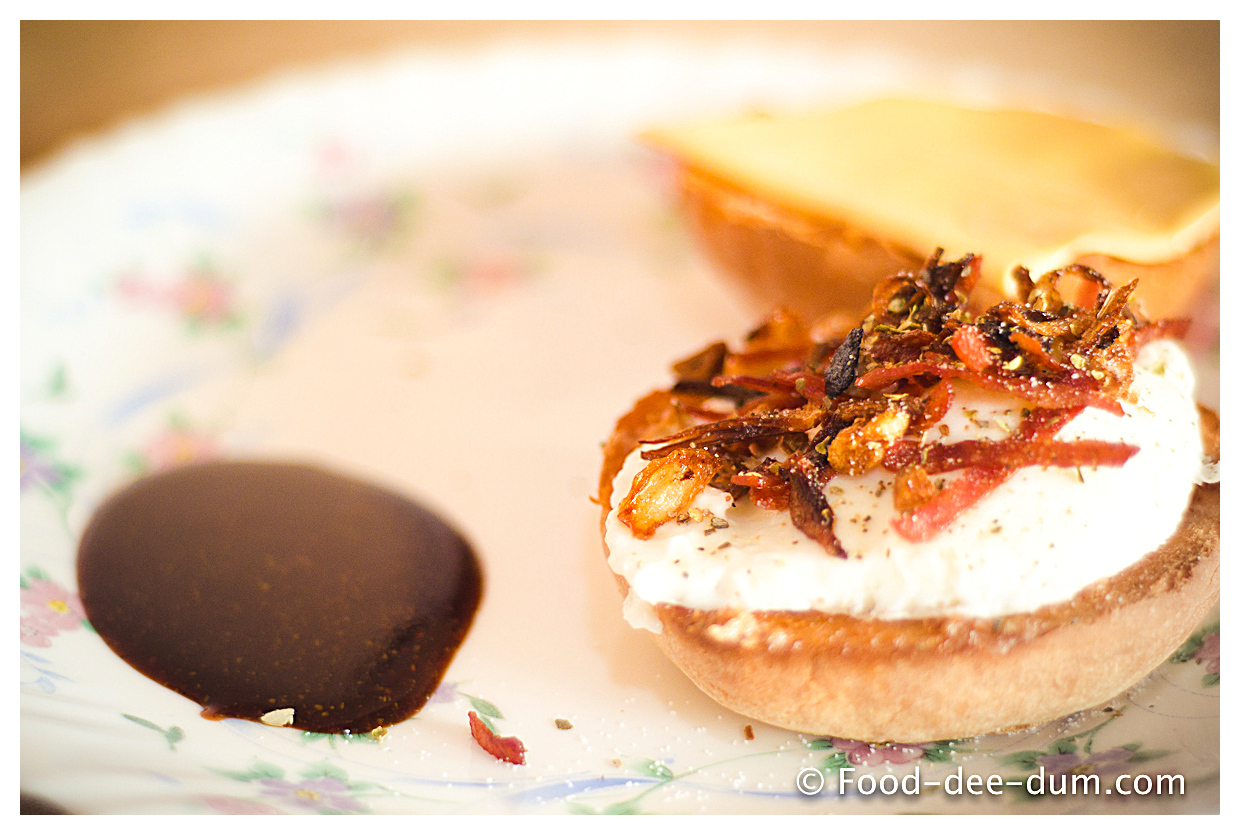 The last week of December was an extremely hectic one for AK & I. We traveled to Pune to attend my cousin Payal’s wedding. Christmas was spent in Pune, amidst a ton of cake & kulkuls prepared by an aunt! (I’m determined to get the KulKul recipe from her one of these days. It’s the most deliciously addictive, sugar-coated confection I’ve ever had!)

Anyhow, that’s not the subject of this post! The point is that 31st was the first peaceful breakfast I could make, after a flurry of cleaning the house, which was closed up for 5 days!

Now here’s another (very quick) intro to the breakfast! Whenever AK would see the words “Eggs Benedict” on a menu or in an article, he would get pretty excited because it’s a form of egg that he has never tasted. He couldn’t even visualise it (and obviously wouldn’t dream of using Google for an image, since I’m supposed to conjure up every demand!)

But the mere thought of Eggs Benedict (I’ve never poached eggs before & it always sounded like an extremely delicate task, Hollandaise sauce sounds complicated enough, and of course we don’t get English Muffins in our neighbourhood store) would make me run in the opposite direction! But I decided to face my fear & try step 1 of the process – hence end the year on a good note!

So I tried poaching the eggs and left the Hollandaise + English Muffin for another time!

Then I added the ham to a hot non-stick pan and cooked on medium heat till it became fairly crisp and the kitchen was filled with the aroma of cooking pork! It looked liked this once done…

The ham took about 10-12 minutes and only needed an occasional stir to prevent burning, so I placed another non-stick pan with about 2 inches of water & the vinegar on medium heat. I heated it till it was simmering (a lot of tiny bubbles along the bottom and sides of the pan but not a rolling boil). I reduced the heat further to medium low, because we don’t want this water to “boil”. It needs to simmer consistently. The reflection from my kitchen window is distracting, but this is just to give you an idea.

While the water was heating, I cracked the 4 eggs into 4 small bowls. This is important because if you crack the eggs directly into the water and the yolk happens to break, there’s nothing you can do about it! Whereas, in the bowl, you can discard the broken egg, or pick out pieces of shell if they happen to fall in!

Please ignore the sketchy looking matchbox in the frame! I forgot to move it out!

Anyhow, next I gently slid the eggs into the water (one-by-one), trying to keep them separate. Depending on the size of your pan, each batch should not have more than 3-4. I was too lazy to repeat the process and I did all 4 in one batch!

Once all 4 eggs were in, I covered the pan with a lid.

Then I set my timer to 3 minutes…

And then pressed “start” !!

While the eggs were cooking, I got my sauce ingredients together and mixed them up in a bowl (proportion mentioned above)…

I checked on the eggs, when the timer rang, by gently jiggling the pan. It seemed like the whites were underdone, so I left them for another minute. This part, you’ll have to work out for yourself – depending on your stove & pan. Ideally the whites should be set and the yellows soft and runny – sort of a strange cross between a boiled egg and a sunny-side-up fried egg!

I carefully lifted the eggs one-by-one out of the pan, using a slotted spoon…

Now for the arrangement…

I placed one egg on a buttered bun half…

Some dried oregano (or any other herb of your choice)…

Dunked some sauce on the side, and dug in!!

So the best way to eat this (in my opinion, of course), is to stab the yellow and let it run over the white and the bun and everything else!! That’s what makes it fun (and kinda messy, but that’s never an issue!!)

Also, the next time, I would probably change the assembly order order to buttered bun-egg-salt, pepper,herb-then ham, onions  & garlic. The salt and pepper should land on the EGG and not on the garnish. Small detail, but I think it will make a world of difference!