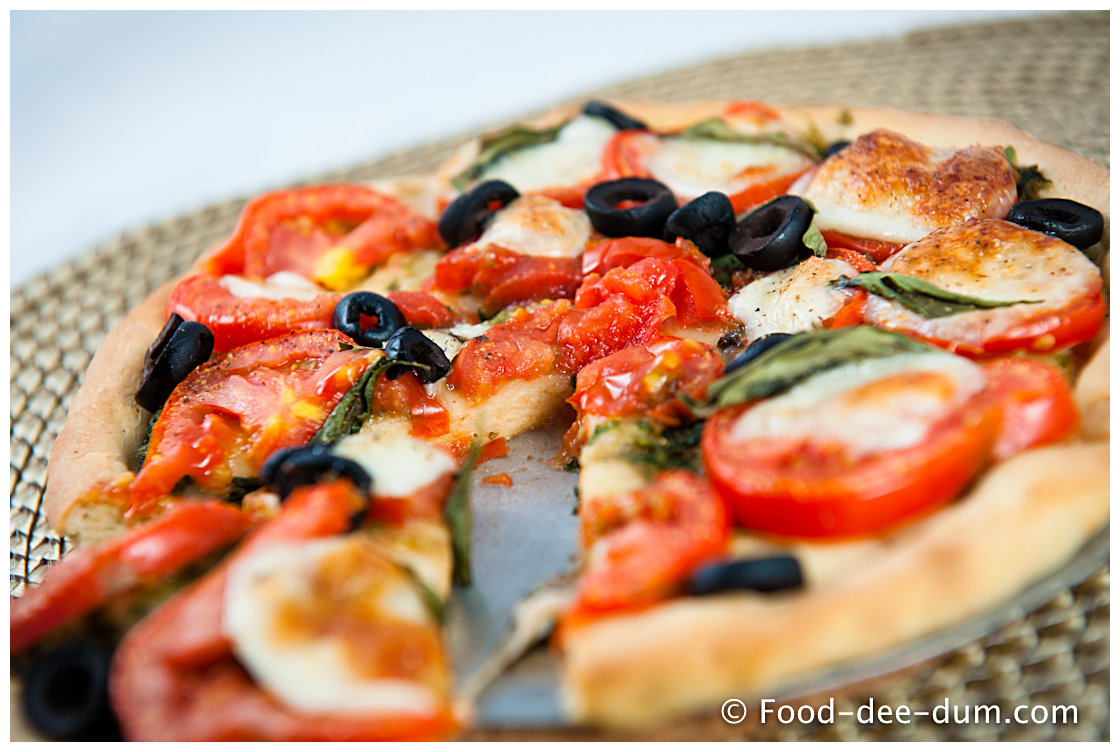 If you visit this blog often, you know by now that AK is a hard core chicken and meat eater. He doesn’t believe in vegetables. As a result, I’m always making pizzas that are overloaded with ham, salami, pepperoni and cheese. But sometimes, I have an intense craving for a simple tomato and basil pizza. If I can add on some baby spinach or rocket or zucchini, that’s an added bonus. But sometimes, just sometimes, the most simple pizza is my favourite!

This post is not about the step-by-step process, but more about a variation and some new things I learned.

I decided to try a new recipe, by Emma at A Beautiful Mess. She’s got some fantastic recipe ideas!

(she says she gets a 14″ pizza that is neither thin nor thick crust, more like hand-tossed; I got a 12″ and an 8″ thin pizza out of this quantity).

I combined the flour, salt, baking powder and baking soda in a wide, deep bowl. In another small bowl, I poured the warm water and stirred in the sugar. Sprinkled the yeast on it and set it aside for a few minutes.

Slowly, I added the yeast-sugar-water and olive oil to the flour, mixing with my hands till well combined. The dough was very soft and sticky.

In earlier times, I just mixed the dough with the hand beater+dough hook but this time I mixed it by hand. Then I lifted it out of the bowl and kneaded it on the counter, for almost 10 mins. The stickiness subsided a little and the dough came together really well. It was smooth and almost silky.

Then I rolled it into a big ball and placed it in a greased glass bowl, covered it with a plate and wrapped it up in a couple of towels, leaving it alone for about 2 hours  rest and rise.

So apparently I’ve been using the Stone all wrong. No wonder it took me 50 minutes plus of baking time to get the pizza ready and even then it wasn’t done well. The stone helps the pizza to bake evenly and if baking directly on the stone, it absorbs the excess moisture. Here’s what I learned about using the stone and followed as closely as possible:

My entire life, I’ve been assembling home-made pizza the same way, whether I used store-bought base or made the dough from scratch. And this was ingrained in me by the “bakery pizza”  we had growing up, before Dominoes and Pizza Hut and then more authentic Italian restaurants came in. The order was always base, sauce, toppings, cheese and seasoning (herbs & pepper).

Now I realised that ideally, the cheese should go below the toppings! It makes all the difference. See for yourself. Below is the pizza made old style, where everything looks like one big mass, as opposed to the tomato pizza picture on top.

So back to the process, once the dough had risen, I punched it down and stretched it out into 2 rounds to fit my 2 pie tins. I baked them individually, placed on the pre-heated stone, for about 5-6 minutes each. I pulled them out, added the sauce, cheese and toppings and baked for another 12-15 minutes until golden. And the tomato pizza was the best one I had made. Ever.

« Banana-Brownie-Milkshake, or BBM
My First (Accidental) Loaf of Bread »