A few days ago, AK & I traveled to Haridwar for a photo-shoot along with my cousins Karan and Shubhreet. It was an extremely hectic journey because of the travel time by road and the packed wedding schedule, but we were lucky enough to find a quick 2 hours to explore the most popular area.

Traditionally, Haridwar is very significant for Hindus. The holy river Ganga/ Ganges flows through it and it is believed to be one of the 4 places where a few drops of Amrit (the elixir of immortality) were accidentally spilled by the celestial bird, Garuda.  The town is visited by millions of pilgrims every year who bathe in the Ganga to wash away their sins and attain Moksha (liberation from the cycle of life). The Kumbh Mela (the most officious time for the holy dip, and is a mass pilgrimage) also takes place at this site every 12 years. The last one at Haridwar was estimated to have attracted approximately 70 million pilgrims! I can’t even imagine being a part of such a crowded festival, although photographers thrive on it and many people think that it’s the most authentic experience of north India.

For me, Haridwar has always signified death, because it is also where Hindus in Northern India take the cremation remains of their dead. From this aspect of death, though, there arises another one of life and continuity – Haridwar is also the place where family genealogy registers are maintained by the Brahmin Pandits/ Pandas. When people visit Haridwar to immerse the ashes, they usully pay a visit to the relevant Pandit to review the genealogy register and update it. I have never seen the one for our family, but I am told it is absolutely up-to-date!

I was very glad for this trip because it gave me an opportunity to change my associations with Haridwar. The fact that we went for a wedding shoot brought “life” into the erstwhile gloomy picture in my mind. And our 2 hour sneaking-away plan showed us a side of the town which was not much unlike Chandni Chowk in Delhi – bustling with people, fantastic food around every corner, all kinds of long forgotten curios, vessels and toys for sale – amidst the religious environment.

Initially we went looking for a Cafe Coffee Day, but when we couldn’t find it, our taxi driver suggested that we head to Har Ki Pauri (the place where the Amrit spilled and is considered the most sacred ghat in the town). That way, we could get a view of the river as well as enjoy a good lunch. We happily agreed and proceeded to Har Ki Pauri. This was the bridge to cross the river from the parking towards the ghat, Har ki PAuri and Bada Bazaar (the market in the back lanes of the area). 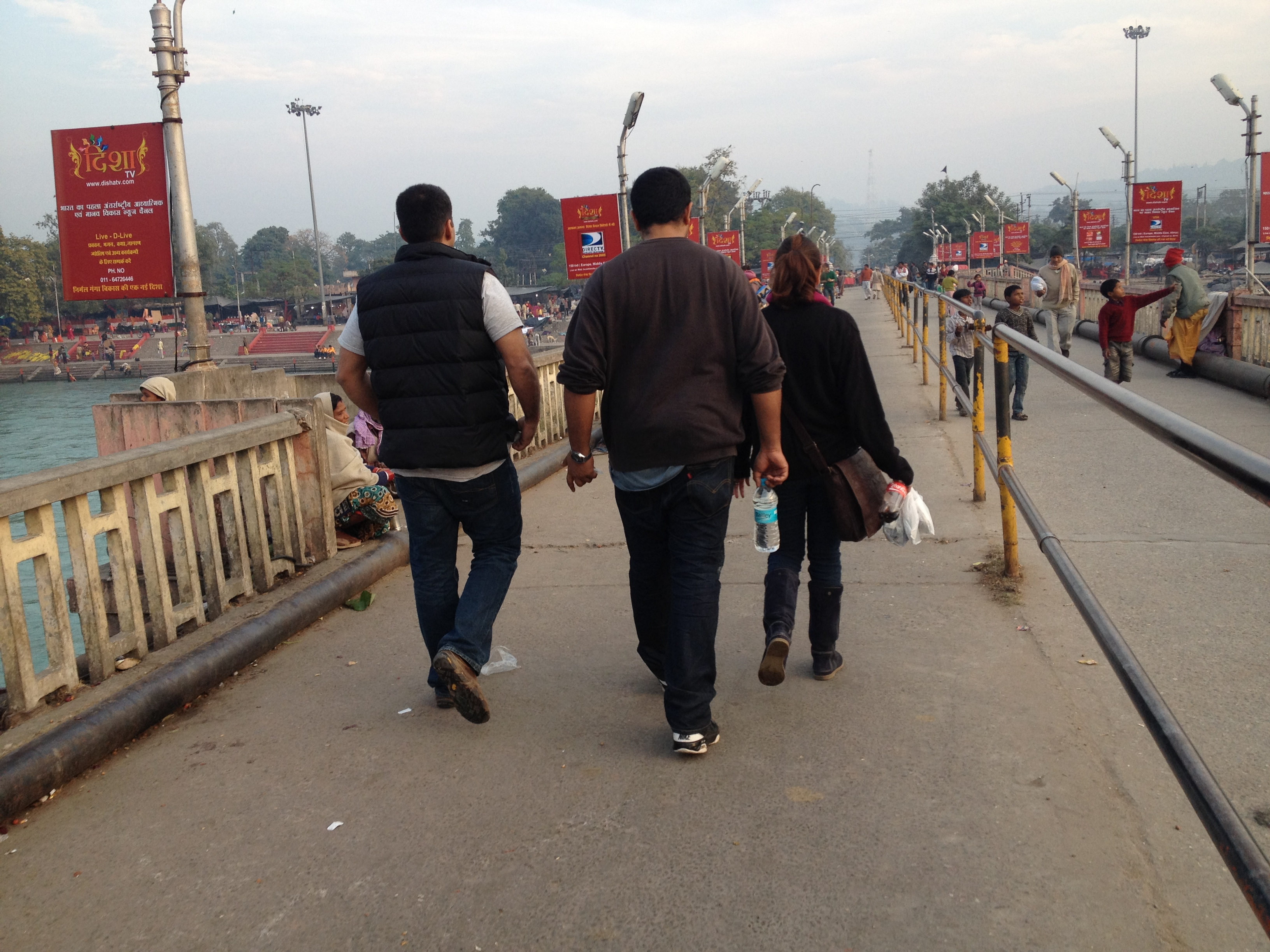 Actually,on retrospect, maybe this was from the walk back. Anyhow, we followed the driver’s directions and entered Bada Bazaar – only to be assaulted by the aroma of food and the sight of over-stuffed shops. 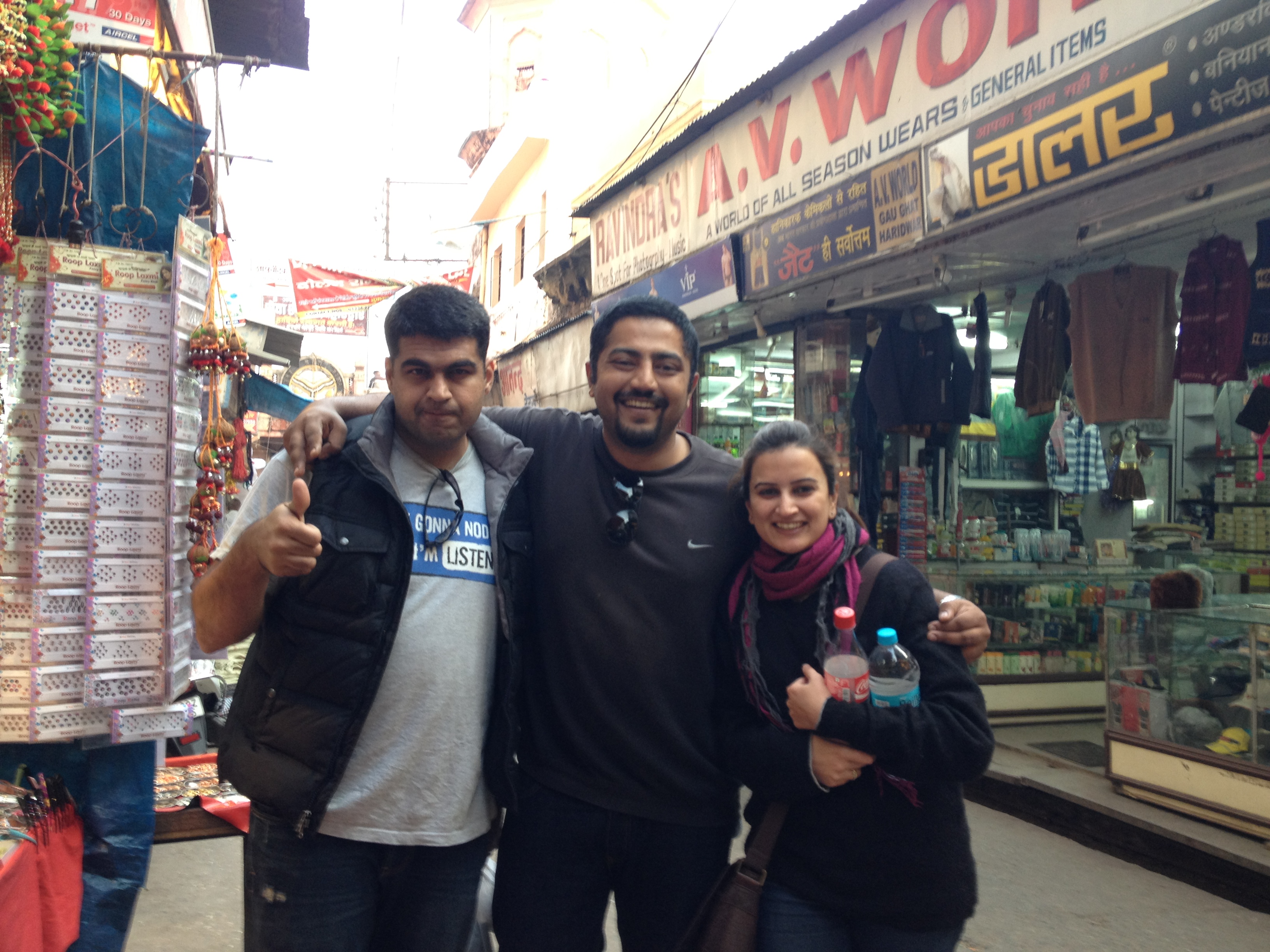 We were trying to locate Panditji Poori Wala for Pooris and Kachodis, but I think that AK missed the sign and we ended up at a hole-in-the-wall Parantha place called Billoo Bhai Paranthe Wala. The owner claimed that the building has been in existence for 450 years. I can’t even imagine the time span it implies (much like I can’t visualise what a crore of rupees looks like!). This is the gali/ alley that leads to it.

I have no idea how AK found this while he missed the more obvious Poori place sign! Anyhow, we inched closer and saw this menu…

Sadly, since we arrived pretty late, the only options available were Mooli (radish) or Aloo (potato). AKs all time favourite parantha is Aloo-Pyaaz (potato & onion) and he was devastated to know that noone there cooks with onions (being a pilgrimage spot). Contrast this with Karan’s delight since he hates onions and is always picking them out of salads, sandwiches, burgers and everything else! Having placed our order for 3 Aloo and 1 Mooli (for me) paranthas, we proceeded towards the seating area, which was a 6×6 foot room above the kitchen, approached by a tiny blue staircase, completely caged by a grill. On the way up, we saw this sign and  had a good laugh since one of our closest friends is called Jolly! I didn’t waste even a minute in uploading the photo and tagging her in it, leading to a flurry of comments!

Ensconced in this blue jail, I couldn’t help looking up the significance/ usage of “blue” in interior decor. According to google, it is supposed to slow down metabolism and suppress appetite – not recommended for food and cooking promotion! I doubt the owner had access to the internet or an interior decorator, but I do know that it did nothing to suppress our appetites. We wolfed down 2 massive paranthas each with achaar (pickle), some potato curry and dahi (curd).  Drawback, he didn’t have curd or butter so we had to send him out for both. And AK decided to run out himself for Coke, without which he and Shubhreet are incapable of having a meal!

The paranthas themselves were not the best ever, but together with the accompaniments and the environment, it made for an extremely satisfying meal. A very heavy one, but worth every gram of weight gained!

After paying a measly 400 rupees for 8 paranthas and the outsourced butter and curd, we stood round chatting with the owner for a few minutes and headed out in search of dessert! Here’s the proud parantha walla!

And whatever little of the order-taking counter and kitchen we could see.

Against the parantha walla’s recommendation, we continued to walk deeper into the bazaar and found a milk shop (Pandit Sevaram Sharma Doodh Walla), selling hot milk in kullhars, curd  and some milk based sweets like Rabri.

I opted for the Rabri and, boy oh boy, was it a good decision. It was creamy and served at room temperature. Perfect sweetness for my taste, sprinkled with some pistachio.

AK wanted to share, as the 2 spoons will tell you, but he loved it and polished it all off on his own! Of course, I made him buy me another serving just for me!

That’s the boiling milk in the background, by the way- served in large kullhars (un-glazed earthen cups). We were too full to attempt that after the rabri, but we did have some when we returned to shoot the next morning!

This is us, very happy with dessert, even though we were bursting at the seams!

Oh and that’s Karan showing off the boat toy he bought – throwback from his childhood. I think he was more excited because the last time he must have played with one of these, he had no idea he was going to be a REAL sailor!

He was not too  impressed by the Rabri and still craved a little something so we started walking back towards the bridge and stopped so he could get his fill of dessert – Gulab Jamun at Gopal “G” Pede Walla. I know this is a picture of the kachoris, but I wanted to get the name. The “G” is hilarious! 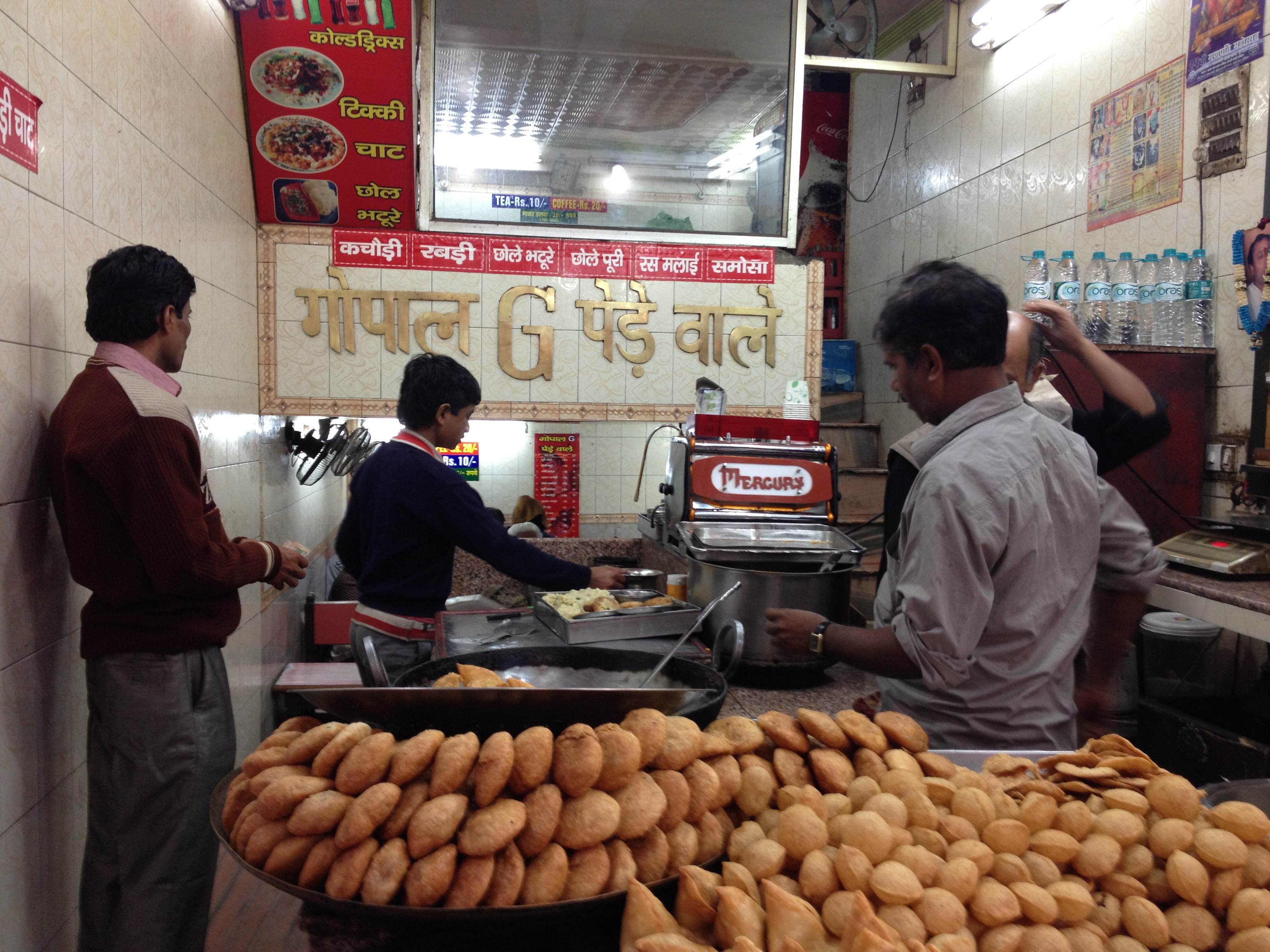 I’m not the greatest fan of Gulab Jamuns, so I gave it a miss. But a few minutes later, I was dumbfounded and stopped dead in my tracks at the sight of a mobile cookie shop  – on a desi cart with a desi jugaad oven! Check out the chimney on that oven! It was the most amazing thing I’ve ever seen. I mean it’s obviously based on the gas oven concept and I’ve used my Mom’s for years. But this was on a CART. And it had a CHIMNEY! I was so fascinated that I made him open it up and show me… And bought half a kilo of the biscuits…

They were so soft and crumbly and warm – straight out of the oven. Even though each of us was stuffed silly, we couldn’t stop munching on them. It was only next morning, while I was munching on some more with tea, that I realised that they tasted like the old fashioned atta (whole-wheat) biscuits – the ones with ridges that were baked only by local bakeries and bread shops. They were definitely my favourite type of biscuit growing up, second only to rusk! Sadly, I’ve never seen these biscuits on a cart in Delhi.

By this time, we were running late and had to return to the hotel for the wedding proceedings. So we rushed out towards the ghat and took a, literally, 2 minute stop to dip our hands and feet into the holy river. 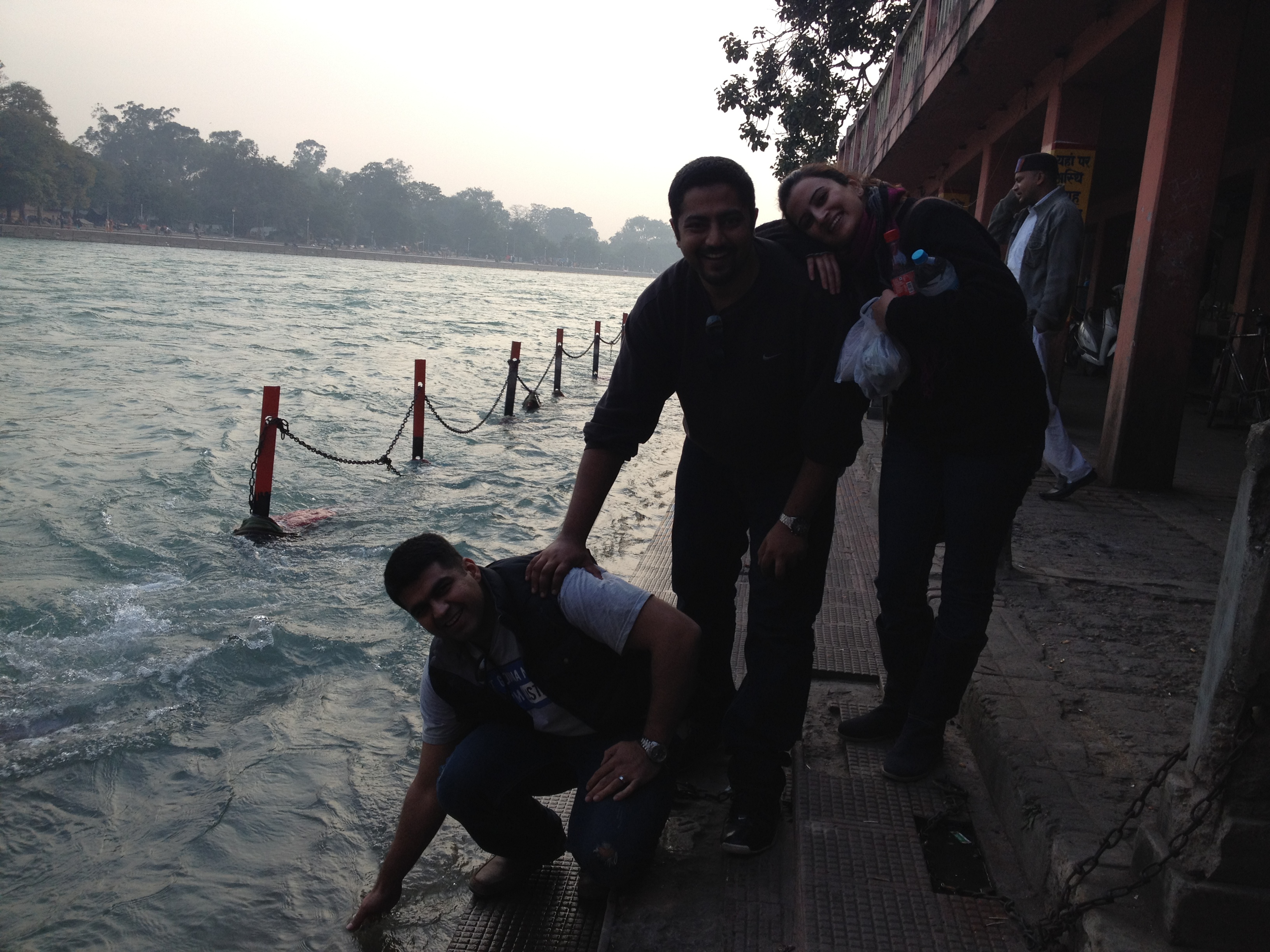 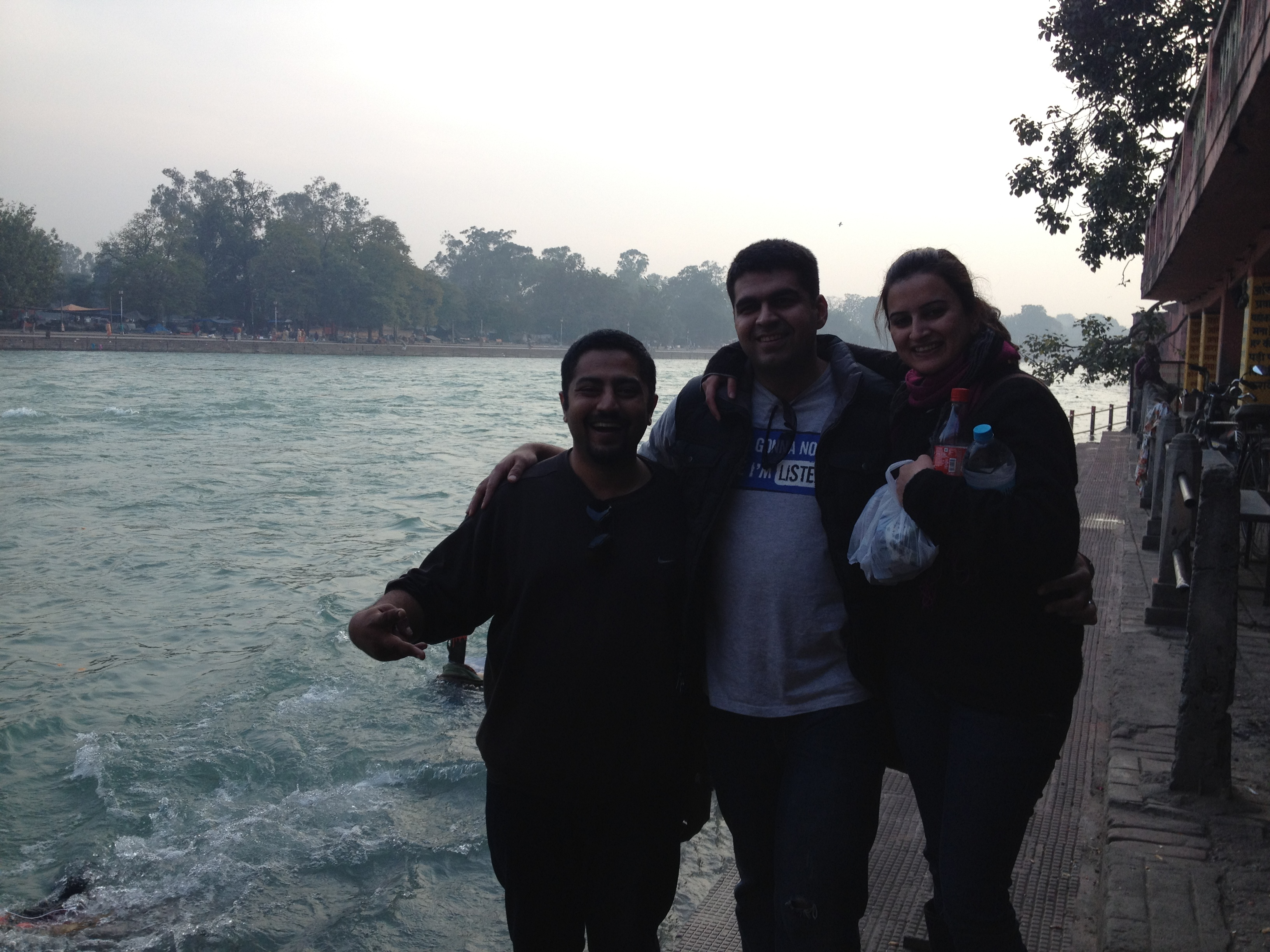 Making our way back towards car, we spotted this ad on a police barrier…

In true Indian style, the ad is pretty sexist but the fact that the model’s face was the only chamak (shine/ glow) visible made me forget that I was offended!

In case you have any plans of visiting this food and photo paradise, the entrance to this bridge is at Gau Ghat Setu. I remembered to photograph the landmark quite belatedly. On the way out. All in all, it was an afternoon well spent. I’m sure we would have benefited much more by using this time to catch up on some much needed rest but I wouldn’t trade this afternoon for anything!

Just before leaving for Delhi the next morning, we returned to this ghat to shoot with the couple and we treated ourselves to a kullhar of steaming milk for breakfast! Normally, I dislike hot milk if it’s plain. I like it with flavoured additives like elaichi (cardamom), kesar (saffron) or even western ones like coffee or chocolate. But plain  hot milk is not something I can handle. But this changed everything. There was no flavoured additive or sugar in it. Just the goodness of whole milk, boiled in a large (almost cauldron like) vessel and served in an earthen cup. It made all the difference.  I’ll update those photos when AK is ready with them.

Lastly, we packed 4 plates of kachoris with aloo bhaaji from a street stall stationed right outside the famous Panditji Poori Walla! Rustic and probably very un-hygeinic, the curry soaked kachoris were a fitting farewell to Haridwar!

« Tembleque
Molten Mocha Cake: Or a Happy New Year and Another Anniversary »