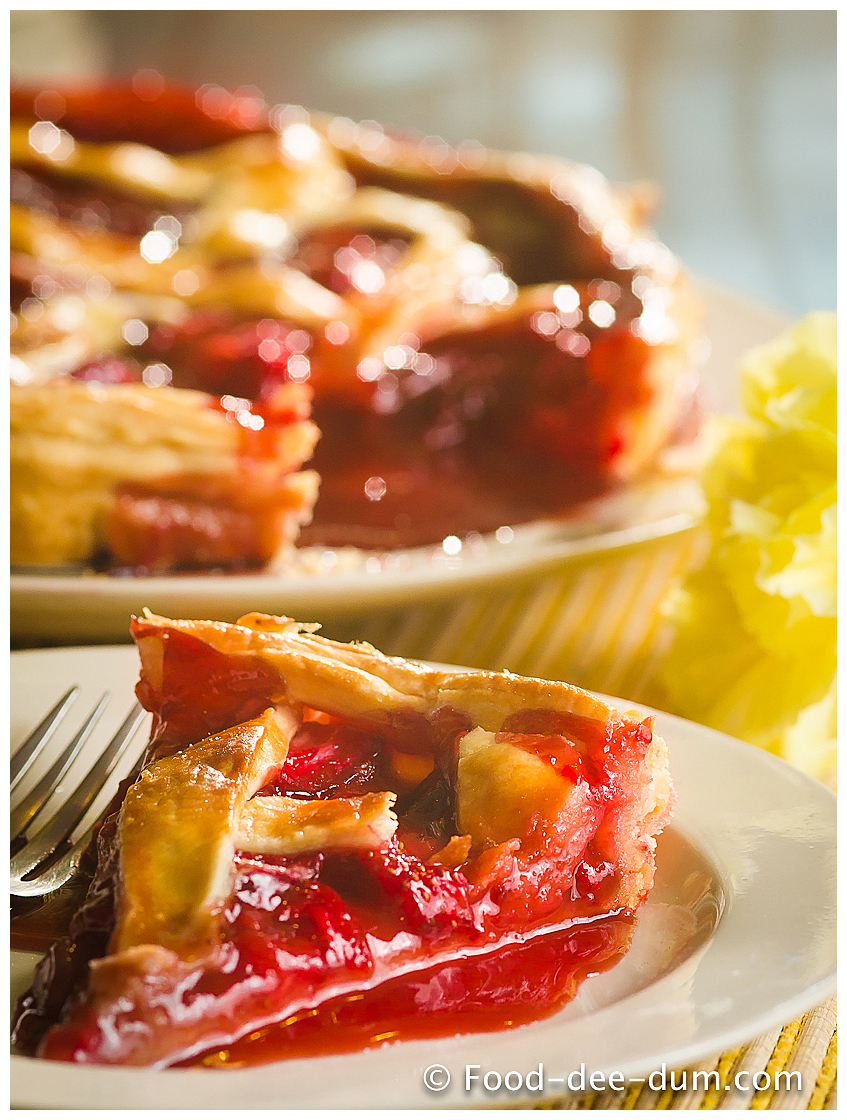 Or overcoming my fear of pie!

I’ve owned my first pie tin for the last 5-6 years and I can’t believe that this is the first pie I ever made. The whole rolling and moulding the dough into the tin gave me the shakes. Funnily enough, even though I never got around to using the first tin, I bought another (yes, another) 2 years ago!

On a related note, my friend Revati has been waxing eloquent about strawberries and how cheap they are in Goa. Frankly, I was unable to find strawberries in Delhi for less than 200 bucks a kilo. It’s ridiculous. I kept waiting for the price to go down so I could buy a car-load full and go crazy! But I couldn’t resist anymore. I bought myself half a kilo of strawberries and then wondered what to do with them.

Flipping through an old Fruit Dessert book by Anne Willan, I decided that it was time to brave the pie. There was an easy sounding peach pie recipe that I thought would be perfect to modify and I decided to get to it before I lost my nerve again.

250 gms + 2 tbsp all purpose flour (some extra for dusting the counter)
200 gms cold salted butter (you can add 1/4 tsp salt if you’re using un-salted)
(Also, the recipe actually called for 125 gm vegetable shortening + 75 gm butter – but I have never been able to find shortening here. I just used all butter. But if you can get your hands on it, apparently shortening makes ALL the difference.)
Chilled water to bind the dough, approximately 45 ml
1/2 kg strawberries
60 gms brown sugar + 40 gms white granulated sugar (you can also use all brown or all white depending on how sweet you like it)
2 tbsp lemon juice
1/4 cup Malibu (coconut flavoured white rum) – you can use any other liqueur of your choice, or add in 2 tbsp of balsamic vinegar for a twist, or 2 tbsp honey + 2 tbsp dessicated coconut
1 egg + 1/2 tsp salt for the glaze

First, I weighed the butter and cut it into small cubes

My hands were unused to the exercise and I had to stop a few times to shake them out before I could continue. I would gladly have used my trusty (!!) pastry cutter if it hadn’t split into two…

Moving on, I sprinkled the chilled water into the flour-butter mix, little-by-little, and kneaded it until it came together in a soft dough. This dough was a little crumbly and not elastic like bread/ roti dough but soft nevertheless.

Then rolled the dough up into a ball, flattened into a disc and wrapped it tight in clingfilm before placing it in the refrigerator to chill for 30 minutes.

While the dough was chilling, I washed and cut the strawberries, into 4-6 pieces each, depending on how big or small each was.

Placing the bowl in the fridge, I put my feet up for a few minutes until the dough time was up. I didn’t want to add the sugar and other liquids to the strawberries just yet or they would render too much water.

When the dough time was up, I took it out of the fridge and turned on the oven to pre-heat at 200 C, placing a cookie tray in the oven to heat as well. I dusted the counter with flour and proceeded to roll out 2/3 of the dough into a big circle, about 2-3 inches larger in radius than my 9″ pie tin. You may need to occasionally dust the dough with more flour to avoid sticking and tearing.

Brushing the tin with a little butter (to avoid the pie from sticking), I carefully lifted the dough and draped it over the tin, letting the extra fall over the sides. Ideally, I should have wrapped the dough around the rolling pin to lift it easily, but my rolling pin is a small roti one, rather than the long and thick pastry pin. So I had no option but to lift it with my hands.

Using my fingers to press the dough gently against the fluted metal edge of the tin, I cut off the extra. In case you don’t have a fluted pie tin, you can use a knife to cut carefully around the edges so the pie shell fits the tin exactly.

Putting this back in the fridge to chill for 15 minutes, I got the filling ready. I added the sugars, the lemon juice, the 2 tbsp of flour and the Malibu and let it rest.

I rolled out the balance 1/3rd of the dough, dusting with dry flour as required,and cut it into 12 strips.

Once the pie shell had chilled, I stirred the filling for the last time and spooned it into the shell. Then I laid out 4 of the strips in one direction. (Note: I thought the strips I had cut were too wide, so I halved them in width) 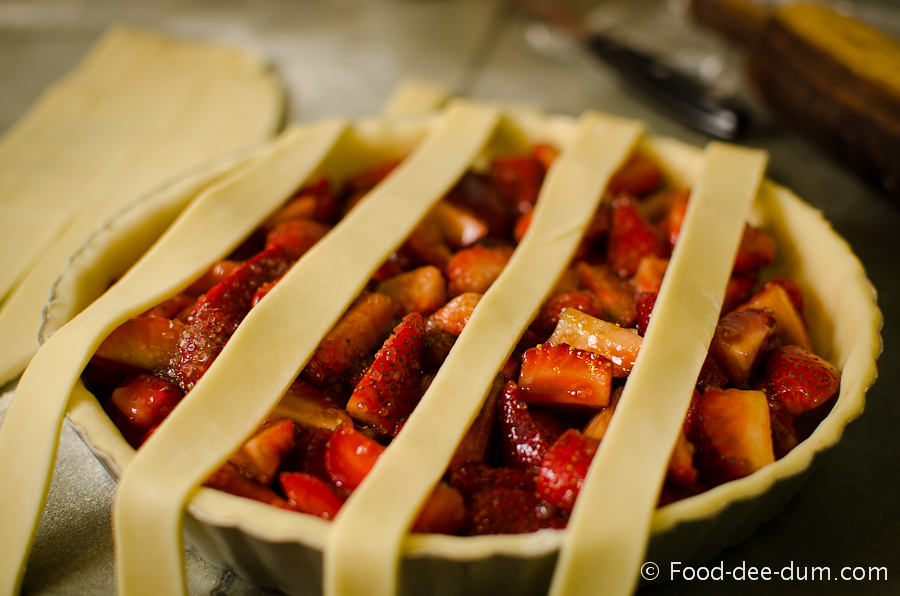 The extras hanging on the side were cut off later so you needn’t worry about that. Then I placed 4 more strips in the opposite direction in a weave-design. 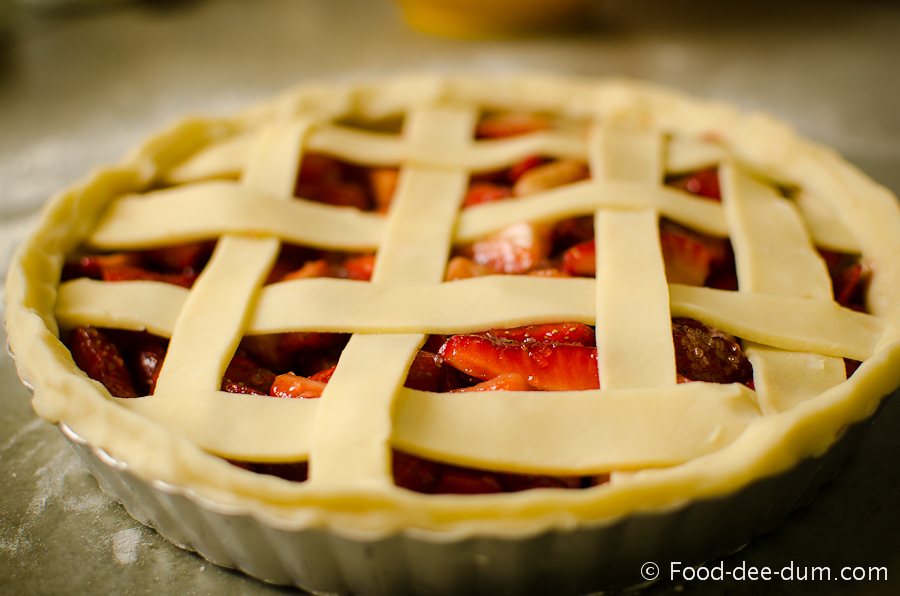 After cutting off the extra overhang of the strips by pressing against the sharp tin edge, I used 2 of the strips to circle the edge/ perimetre of the tin and pinched them as in the above photo – so it sealed the strips and the shell wall.

Beating the egg lightly with the salt, I used a pastry brush to brush the glaze all over the exposed shell & lattice dough… (You won’t end up using all the egg so make an omelet with what’s left. I did!) 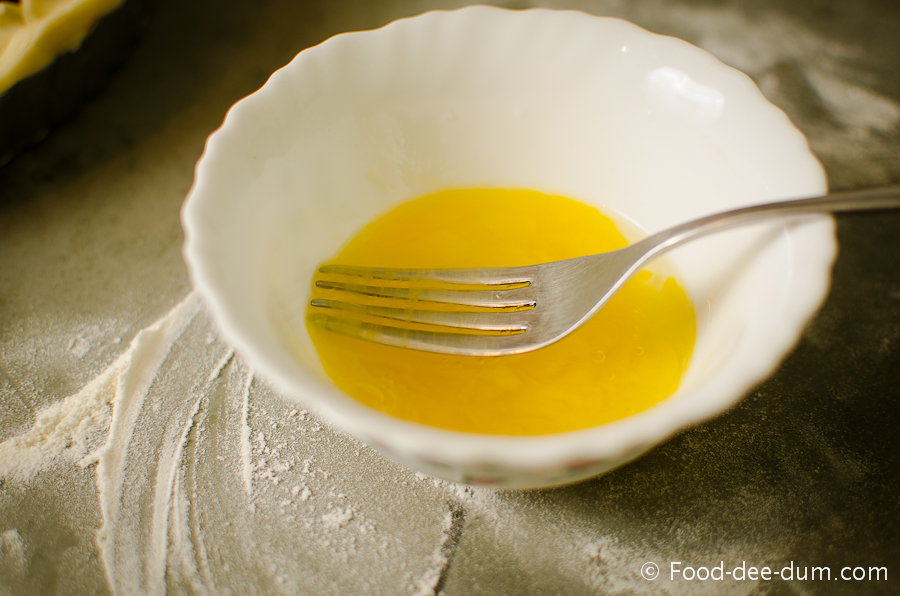 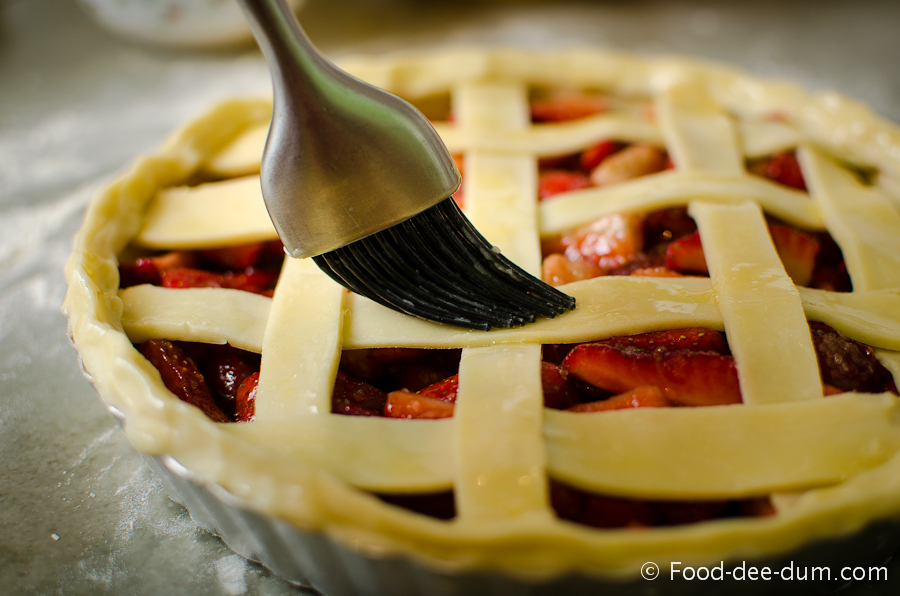 Placing this in the pre-heated oven (on the pre-heated cookie tray), I baked the pie for about 45 minutes until the strawberries were bubbling and oozing and crust seemed baked. It wasn’t golden yet, so I turned on the top coil and baked for 4-5 more minutes. I placed the tin & cookie tray on a cooling rack to cool for about 20-30 minutes… 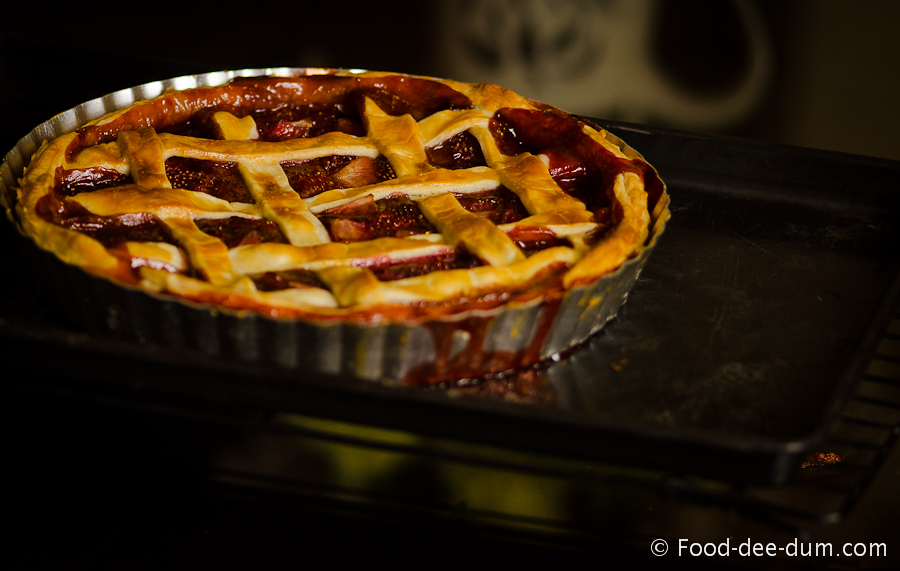 I was a bit worried about the crust getting stuck to the tin, but it shrunk slightly and moved away from the tin and didn’t stick to it. Which was great because all I had to do was lift the removable bottom with one hand and the pie slid out of the pan! I placed it on a plate, ready to cut and serve… 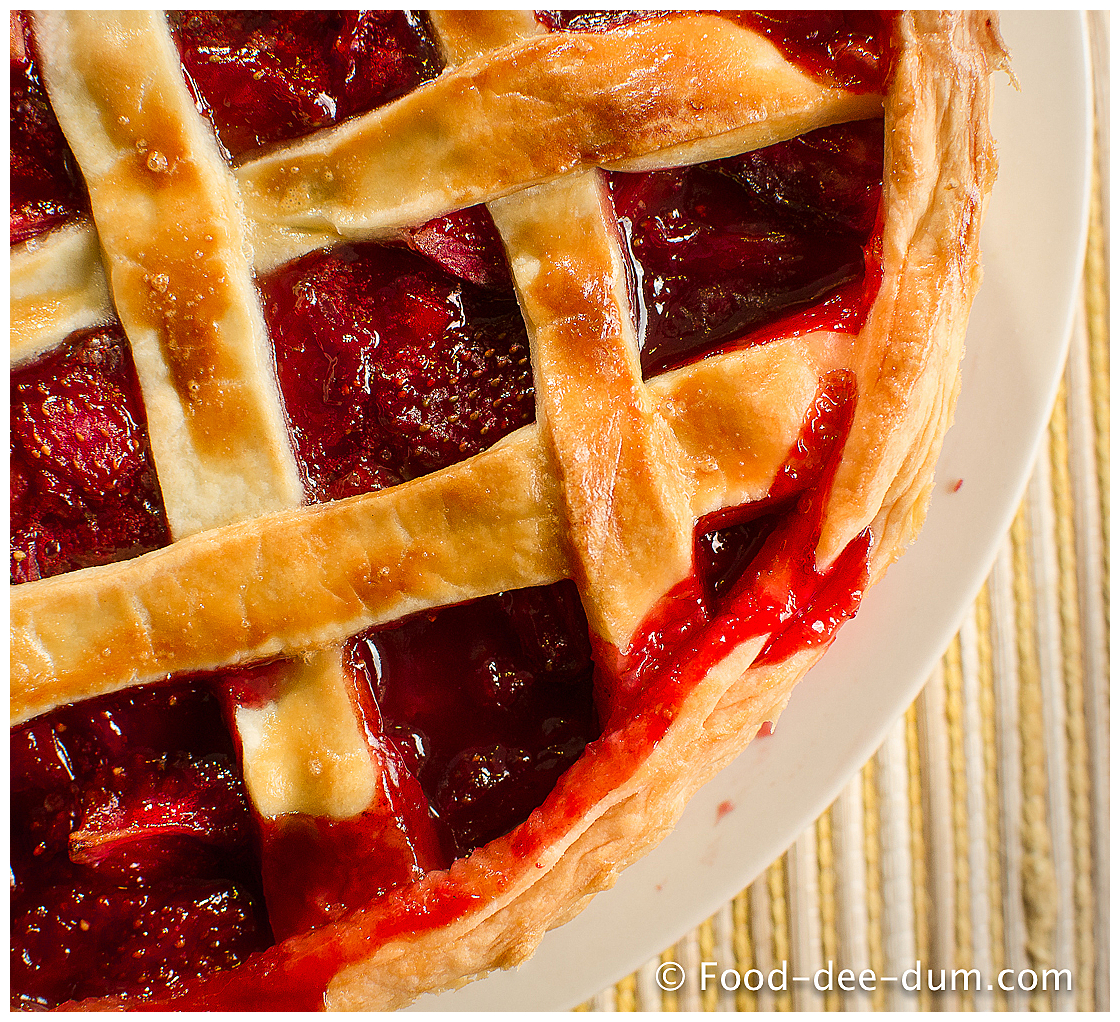 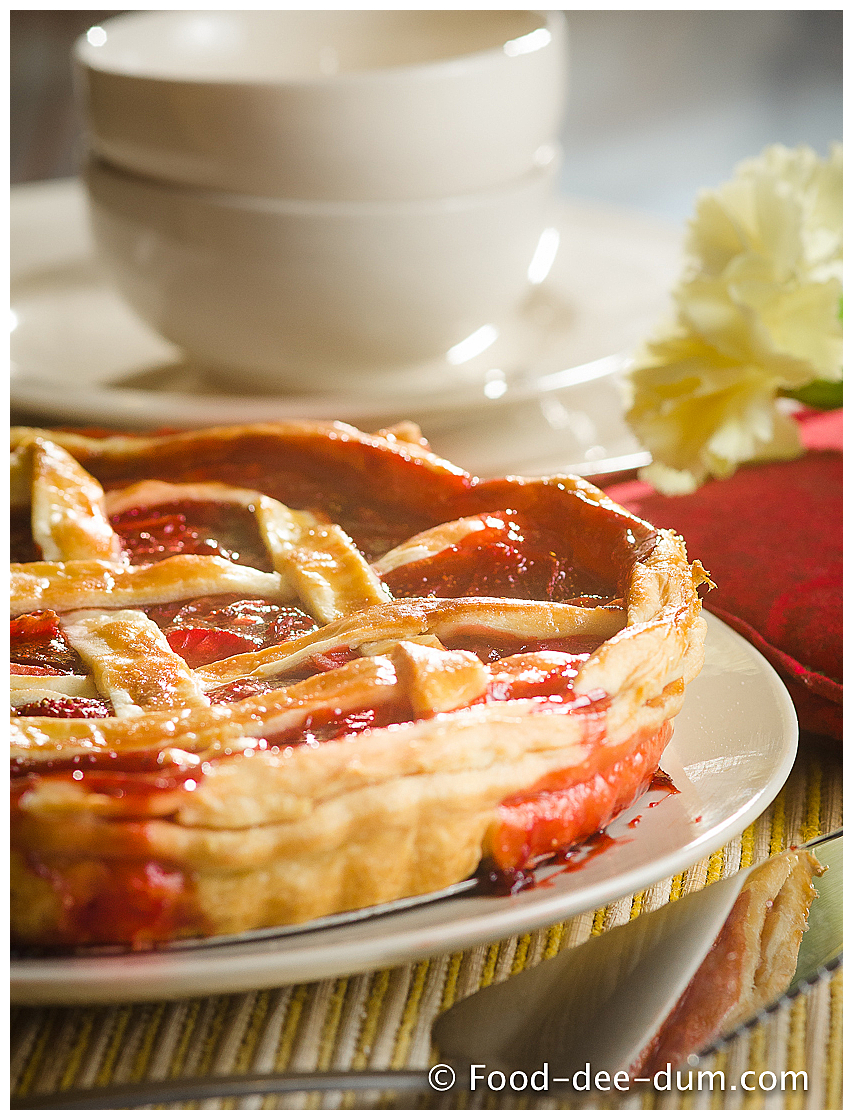 There it is – a slice of juicy, bubbly, tangy-sweet heaven on a plate! My first pie success-story!

Next time I use a juicy fruit like strawberries, I will cover it with more dough, almost a lid, with 2-3 slits to allow steam to escape and save the fancy lattice/ weave for more firm fruits like apples/ pears/ peaches etc.

Also, I was left with 1/4 of the dough after removing all the excess from the tin, which will probably make a few individual pop tarts. Recipe here!