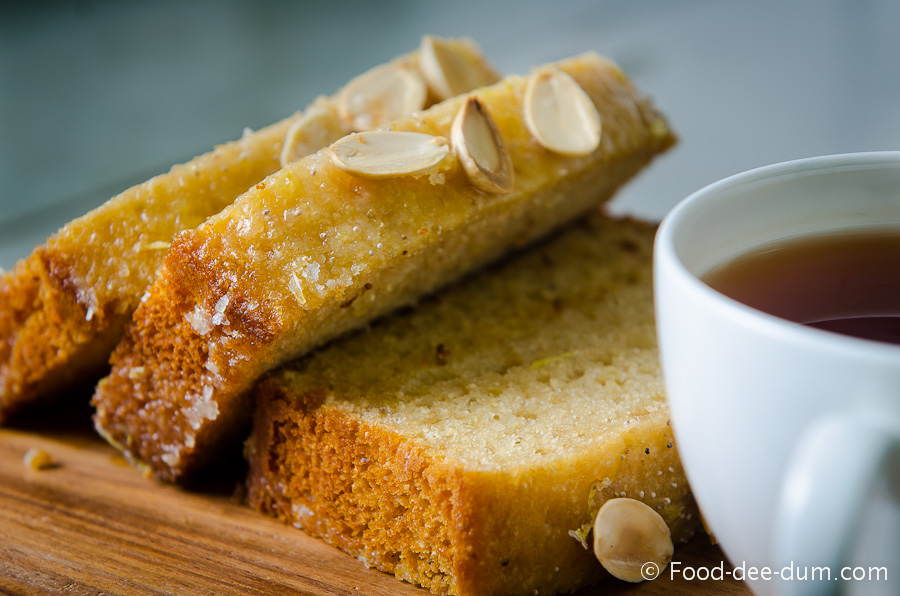 Last evening, I realised that it had been a while since I baked a cake. For no real reason or occasion. Just for the two of us. I felt like something refreshing and summery (because it is well and truly summer now, what with the max 40 C temperature). And nothing too rich. I toyed with the idea of muffins and wanted something with poppy seeds but couldn’t quite put my finger on it.

As fate would have it, a mailer for a home baker popped into my inbox. And Lemon Poppyseed Cake was on the menu. It just made sense and I set out to make lemon poppyseed muffins – changing my mind halfway to make it as a tea cake. More moist and soft than muffins but not much richer or heavier. But wholesome. Just right, as a thick slice, with a cup of tea or with a glass of iced black coffee!

I didn’t refer to a specific recipe, but just cooked it up as I went along. And the result didn’t disappoint!

(I was multi-tasking at the time so I have to admit I prepped a little in advance and some of the step photos are missing).

I turned on the oven to pre-heat at 150 C and prepped my loaf pan by greasing it lightly with oil, lining it with butter paper and then greasing & flouring again. 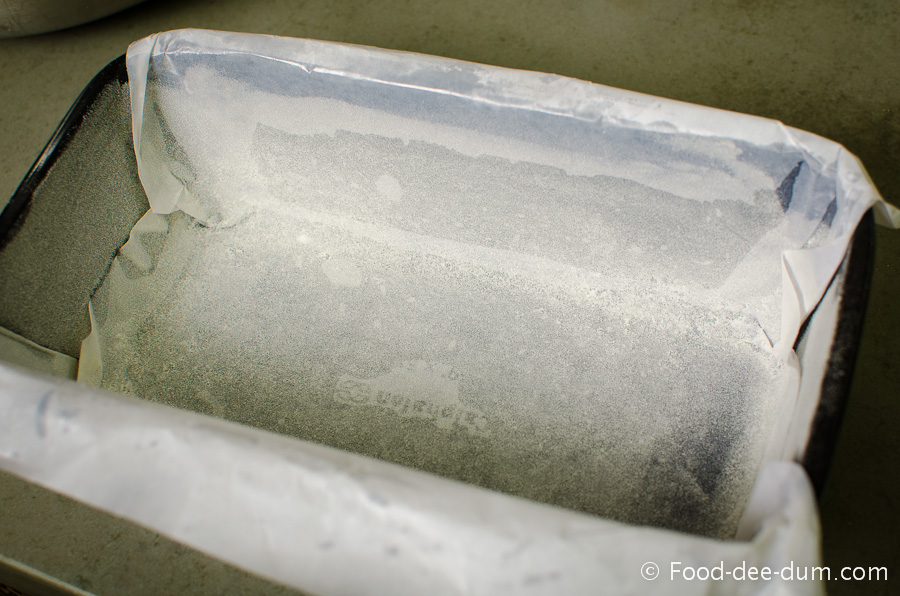 I measured out the zest, poppy seeds and jaggery (grated step not pictured). I warmed the milk slightly and added the grated jaggery to it, stirred to dissolve and set it aside to cool. 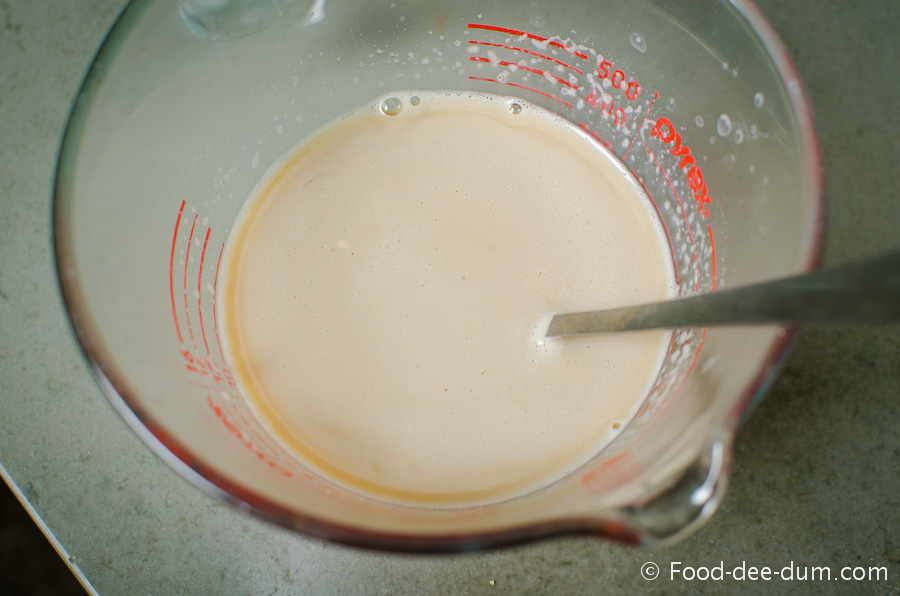 Then I placed the flour, salt, baking powder, baking soda, poppy seeds & lemon zest in a bowl and stirred to combine. 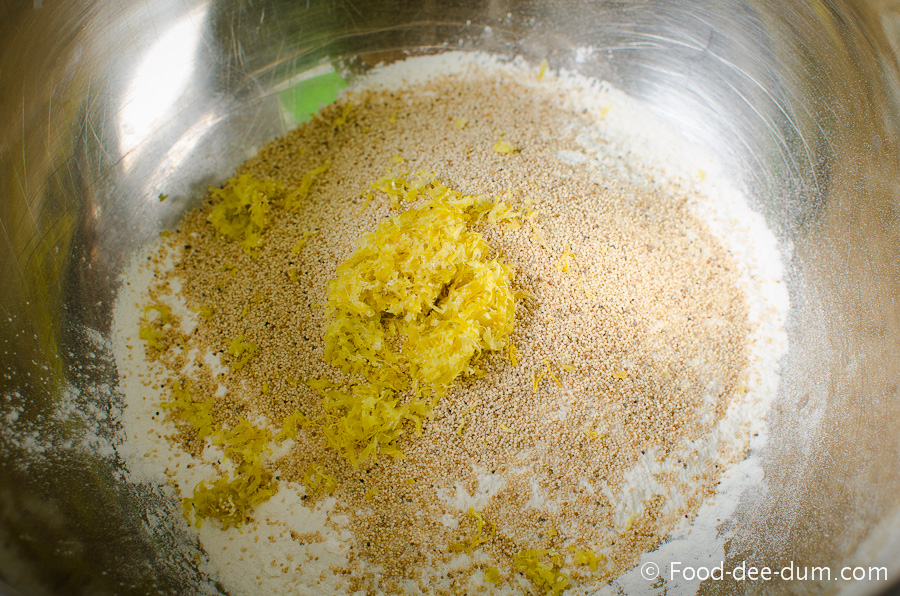 Once the milk had cooled to room temperature, I added the egg, oil and honey and whisked to combine with a fork. I added this to the dry ingredients and stirred to combine. At this stage it was already slightly past the usual dropping consistency. So I was worried about adding the lemon juice and making it too runny. More than that, I was suddenly worried about the lemon juice reacting with the milk and causing it to curdle! But it actually reacted with the baking soda and the whole batter fizzed up for a few seconds. I was equally relieved and delighted with the unexpected reaction (well I should know enough to expect it, but you know what I mean!) The batter seemed lighter and airier and I had a warm and fuzzy feeling about it. 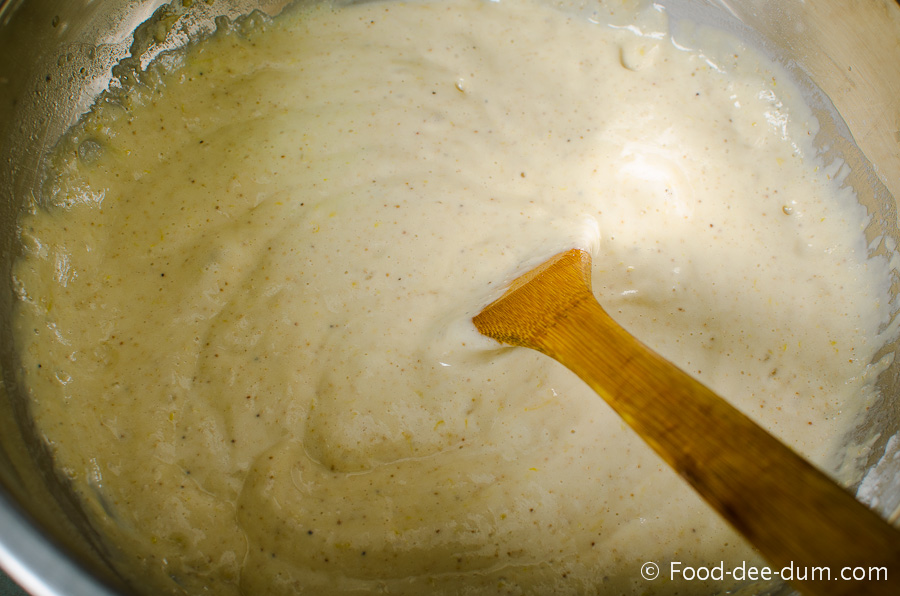 I spooned it into the prepared cake pan and cut off some of the excess butter paper, but not all because I wanted to be able to lift the cake out without inverting it when it was ready. 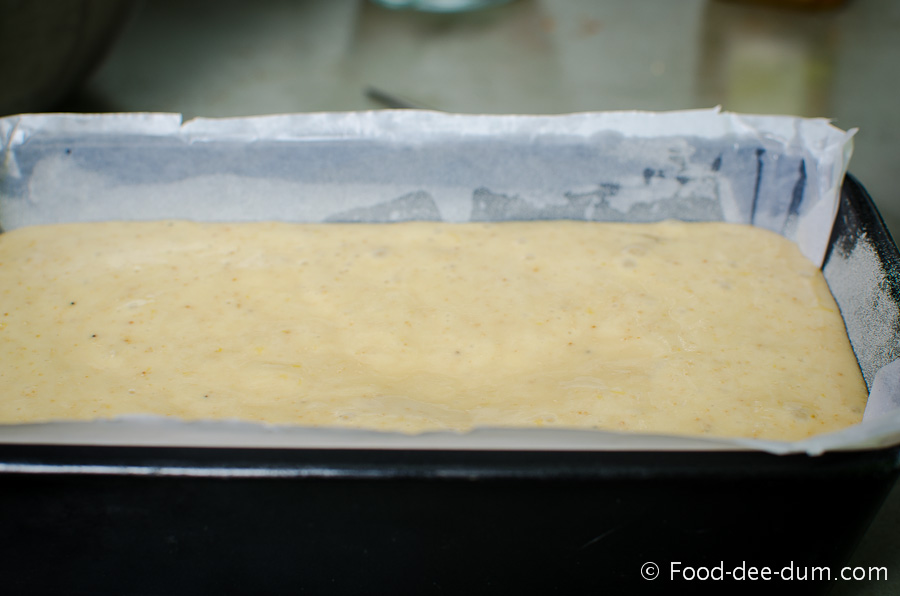 I popped it into the oven for about 30 minutes. It was still slightly gooey so I reduced the heat slightly, to about 135 C and gave it another 10 minutes. When the toothpick came out clean, I pulled it out of the oven and let it cool in the pan for about 15 minutes before lifting it out along with the butter paper and setting it on a rack to cool completely. 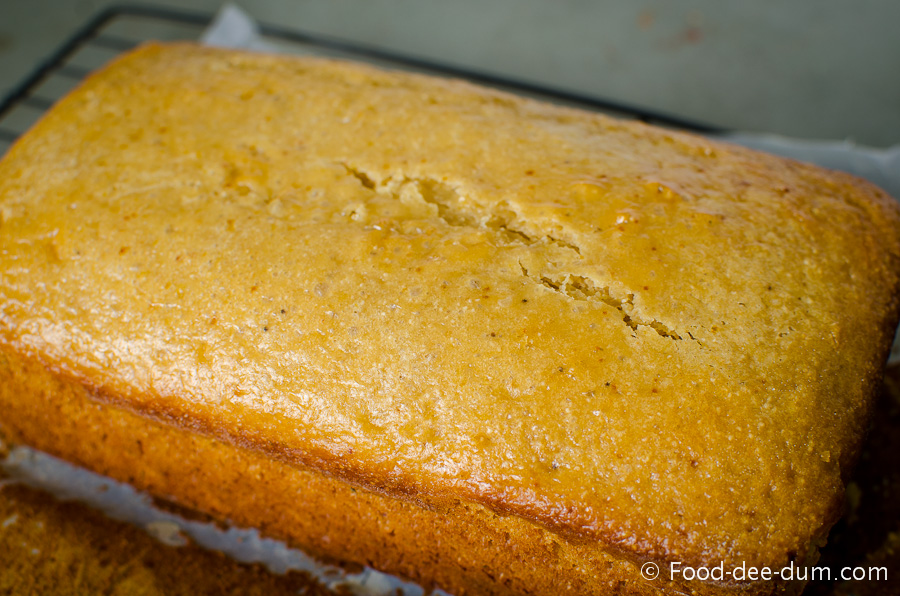 When it was completely cool, well almost, I prepped the glaze. I was a little impatient because I was very excited about the cake and it was still slightly warm. Ideally the glaze should be made just before pouring it on the cake, else it will set before it’s time to pour it  and the cake should be completely cool or the glaze will melt/ liquify completely and be absorbed into the cake rather than form a white sugary crust on top.

For the glaze, I measured out the sugar, zest and lemon juice. I mixed the zest with the sugar and then added the lemon juice drop-by-drop, just until it formed a thin paste. 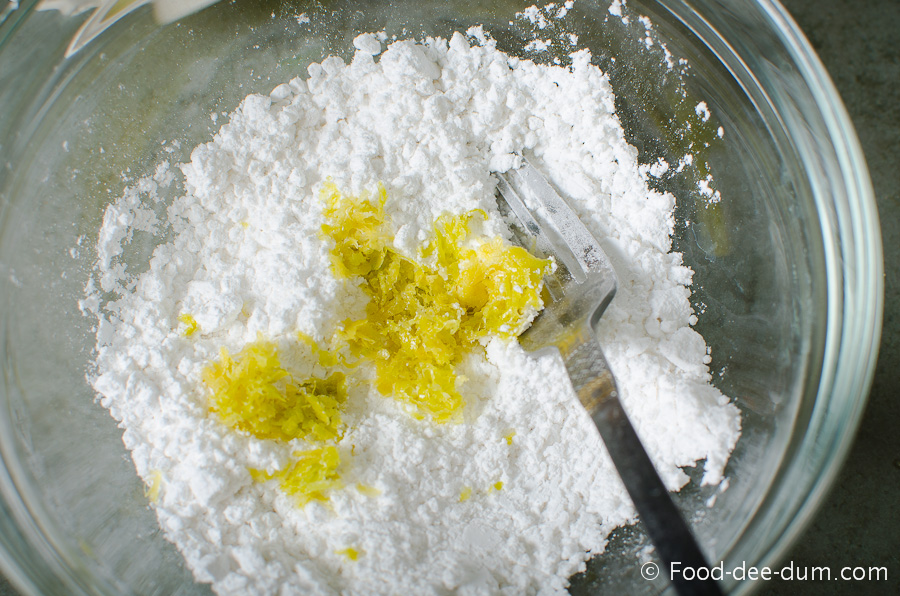 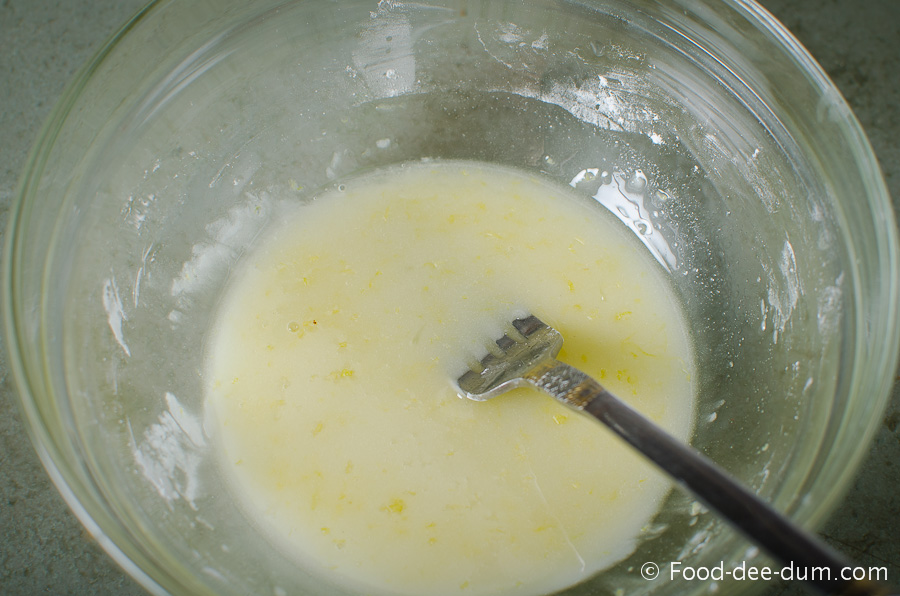 Actually, I thinned it a bit too much. I should have stopped a few drops earlier! See – it slid off the fork in seconds! 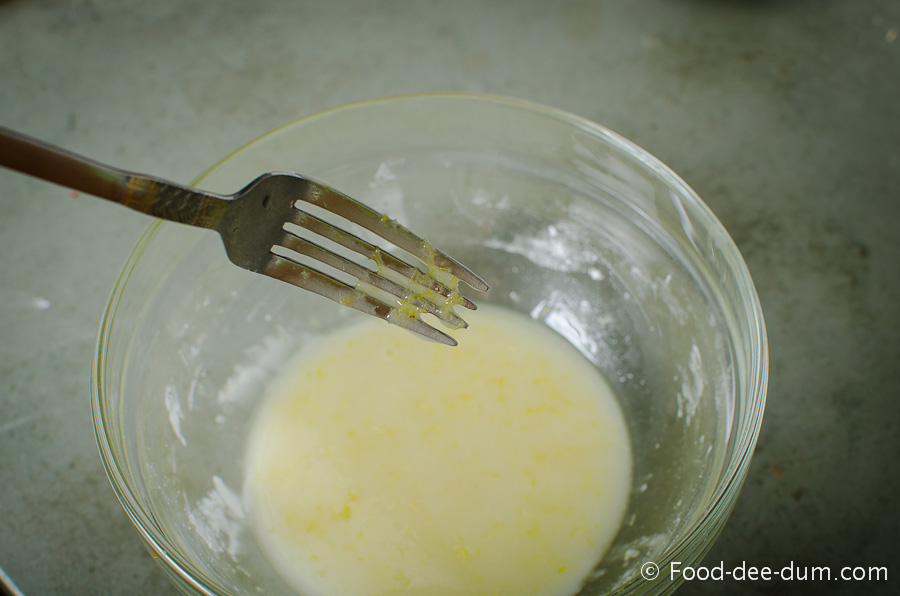 I’m not complaining too much because the thick sugary crust is too sweet for me. In fact, I can even do without. But if you want to do it properly, then leave the glaze a little thicker and pour it only when the cake is completely cool.

I spooned the glaze over the cake… 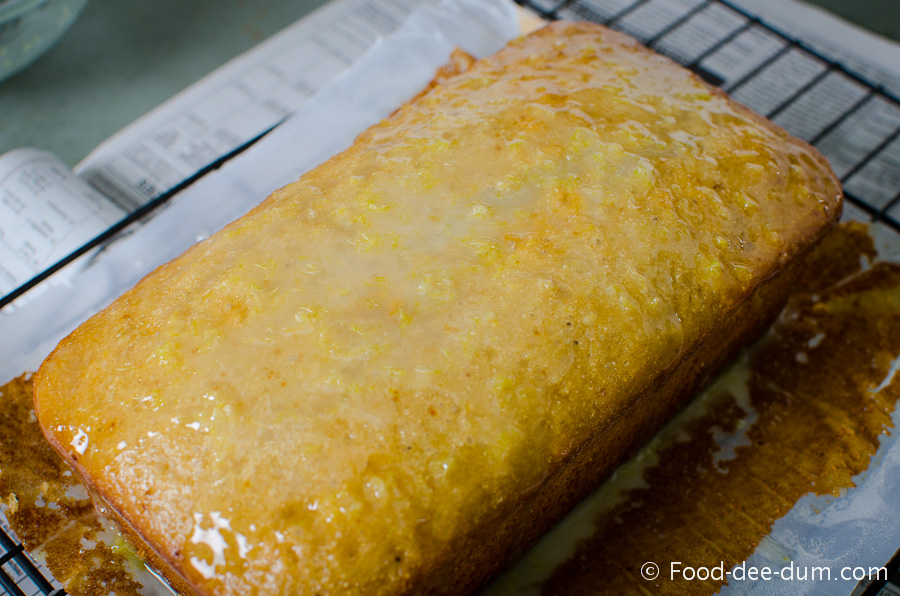 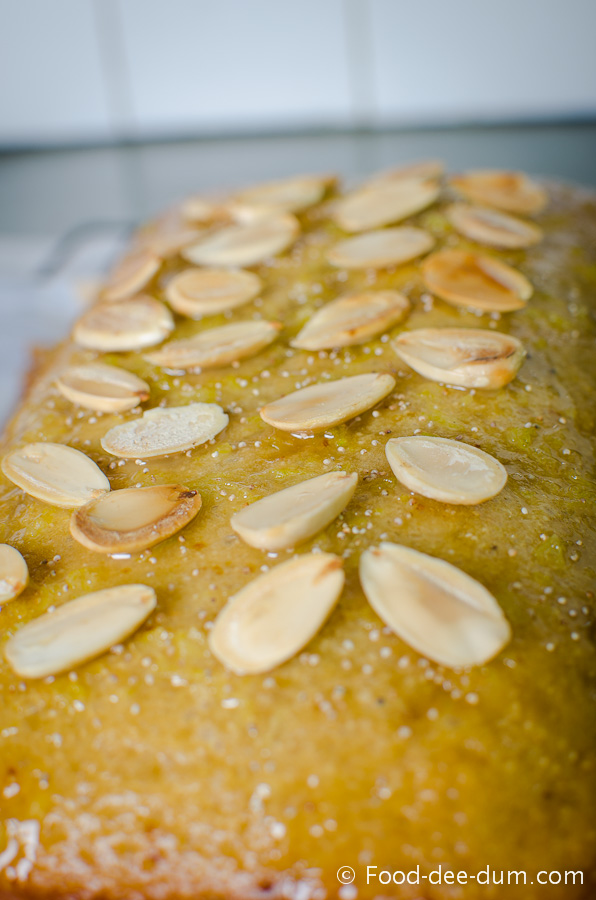 Once the glaze had dried up and set, about 20 minutes, I moved the loaf to a cutting board and sliced it up… 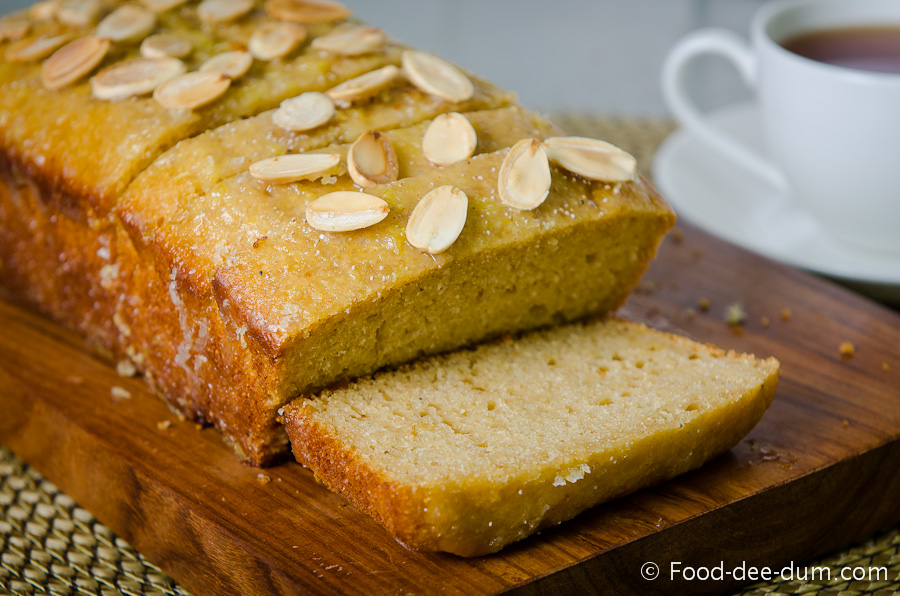 …to enjoy with a cup of tea, after dinner last night. 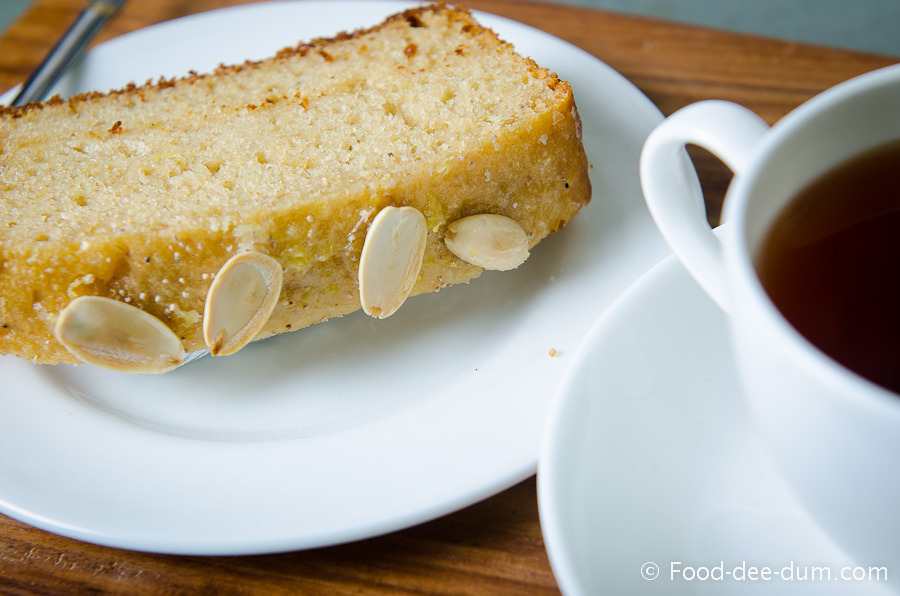 And more, with iced coffee this evening! 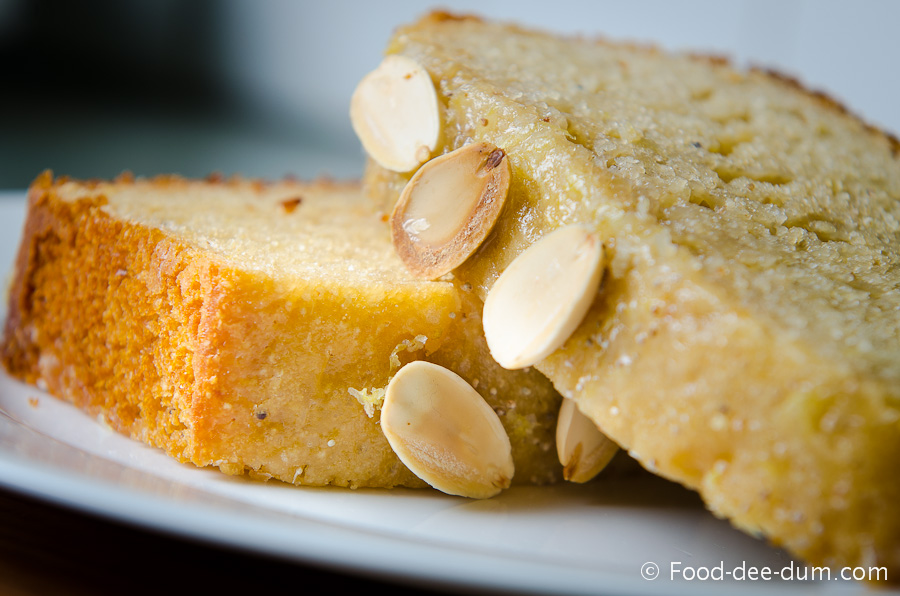 AK loved the lemony moist flavour and texture but didn’t care much for the poppy seeds. I suspect he could only tell because of the 1/2 tsp I added on top. Toasting really brings out the flavour and crunch. I bet I could have fooled him about the seeds altogether if I had ommited them from the top!

I, on the other hand, loved the subtle crunch and flavour of the seeds. Surprise surprise. We really do like different things! I would have bumped up the ratio of the seeds further but I don’t think I could hoodwink him to that extent. But you should definitely bump it up to 1/2 cup if you like poppyseeds.

Oh, and I bet this recipe would do beautifully in an 8-9″ bundt pan. Do tell me if you try it that way…