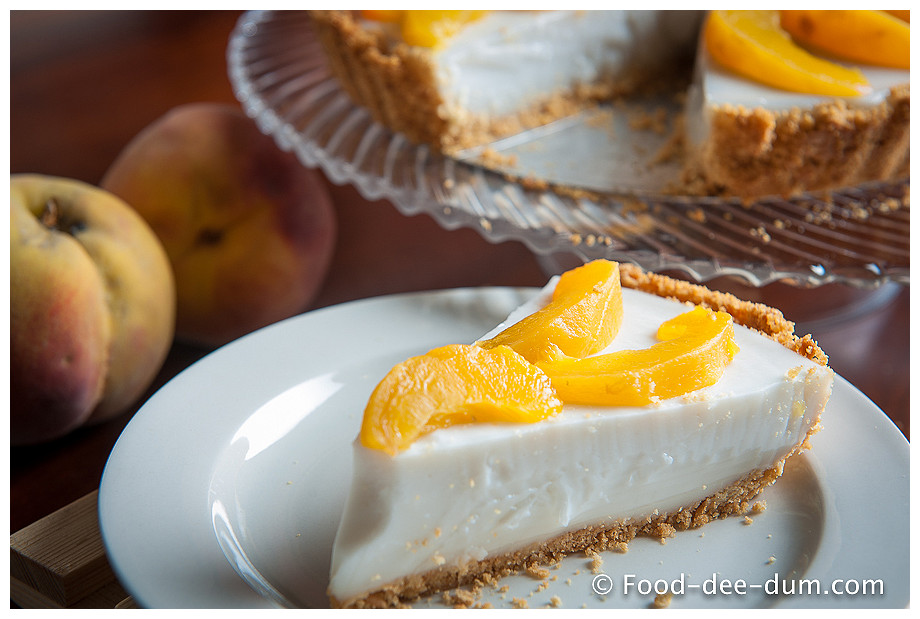 A few nights ago, my Masi (maternal aunt) asked me if I could bring (a western) dessert for a dinner that she was hosting at her home – about 25 people. The only requirement was that all, or at least some of it, should be egg-less because some of those attending were vegetarians.

I’m not a big fan of egg-less cake recipes. I have tried a few, but they don’t seem to hit the spot like the eggy ones do. And on the non-cakey dessert side, my favourites like cheesecake and custard are all better with egg too. So I decided upon a compromise – make Tembleque, which is like a coconut flan (custard), but present it like cheesecake, with a crust and fruit topping. It’s a chilled, egg-less, summery and refreshing dessert. And whats even better is that a very low level of effort and energy is required for preparation, important if you’re making a large batch like me. So win-win situation!

The beauty of this is that it will lend itself to many fruits – think of the type of fruit that goes well with cheesecake and also those that pair well with coconut (tropical fruits) – a combination of those two criteria gives me lots of options – bananas, peaches, mangoes, all kinds of berries, litchis, kiwis. All of these could work in isolation or even as a combination. I’m sure there are many more options but these are available to me quite easily.

Since the main part of this recipe is the Tembleque and I’ve already posted a step-by-step for the same, I’m just going to quickly recap the process below!

Here’s what I used for a 9″ pie tin (with a removable bottom):

I pre-heated the oven to 200 C. Then I proceeded to crush the biscuits to fine crumbs by putting them in a cloth shopping bag and banging on it with a rolling pin. Mixing the melted butter into the crumbs, I pressed the mixture into the bottom and sides of a the pie tin. If it doesn’t hold the shape, then add another tablespoon of butter.

(Pictures of this step here at the Banoffee Pie post).

For the filling, I whisked together the cornflour and some of the coconut milk in a pan till smooth and no lumps could be seen. Adding the balance coconut milk, sugar, vanilla and the salt, I whisked some more and placed the pan on medium heat to cook. I stirred & whisked it all the time, scraping the sides and bottom to ensure that lumps didn’t form or it didn’t stick/ burn.

I cooked this till it thickened considerably and became glossy. Taking it off the heat, I allowed it to cool almost to room temperature. (Pictures up till this step in the Tembleque post). Then I spooned it over the crust and placed it in the refrigerator to set, covered loosely with foil to avoid drying out.

Typically, around 4 hours is enough to set it well but since I had 3 pie dishes to make, I preferred to make them the evening before and let them chill overnight.

Once the filling had set and chilled, I peeled, stoned and sliced the peaches to arrange over the pudding.

All done. Didn’t I tell you it was not effort intensive?! I hope to repeat this with Mangoes and Kiwis shortly. And hopefully post more pictures then!

I know this hasn’t been much of a recipe post, but it wasn’t meant to be! I didn’t take any pictures while making it. But when I posted the photograph on my Instagram & Facebook profiles, I got a few requests for the recipe. So I hope this helps!

When I tasted the peaches I had, they were slightly under-ripe and not soft+sweet enough. So I dunked the sliced peaches in boiling light sugar syrup (1 litre water + 1/2 cup sugar) for about 3 minutes. I allowed these to cool before topping the pudding. But if the fruit you choose is soft and sweet enough, this step is absolutely unnecessary.

Also, feel free to use as much or as little fruit as you like. What I used was merely an indication. In fact, I used less on 2 of them so I could make pretty arrangements whereas I piled on a lot haphazardly on the 3rd because I got bored of carefully arranging it! They both tasted equally good.