(No offense to the Italians, but I couldn’t resist the post title!)

I have always loved pasta but making it at home has always been a challenge, purely from the finesse point of view. It almost always tastes good but, often, something is a little off. Since it is not a native food for us, here in India, making good pasta has always been a matter of trial and error and, of course, following tips and how-tos from any source we can find online.

So when I was invited for a Chefs Table event at Pizza Hut, I was in for a real treat. Pizza Hut has partnered with Barilla, the Italian biggie, for the pasta served in Pizza Hut restaurants and, to showcase the latest (and soon to be seen) range of dishes, they invited a few special guests for an interactive live cook-out and Masterclass. Conducted by Pizza Hut’s Head Chef, Arjyo Banerjee, and Barilla’s Executive Chef, Luca Ciano, at the Ambience Mall (Vasant Kunj) outlet, the evening was a an eventful one. 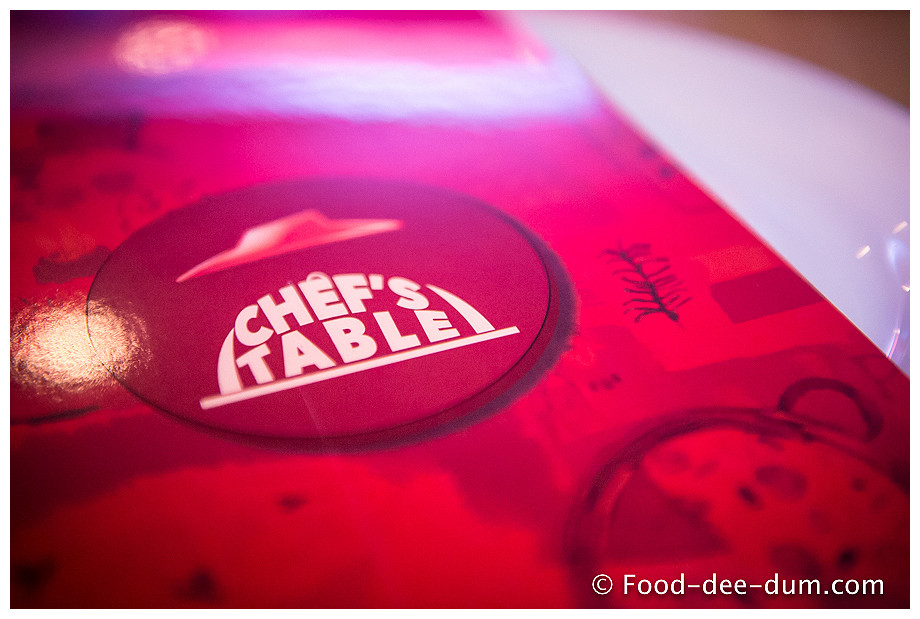 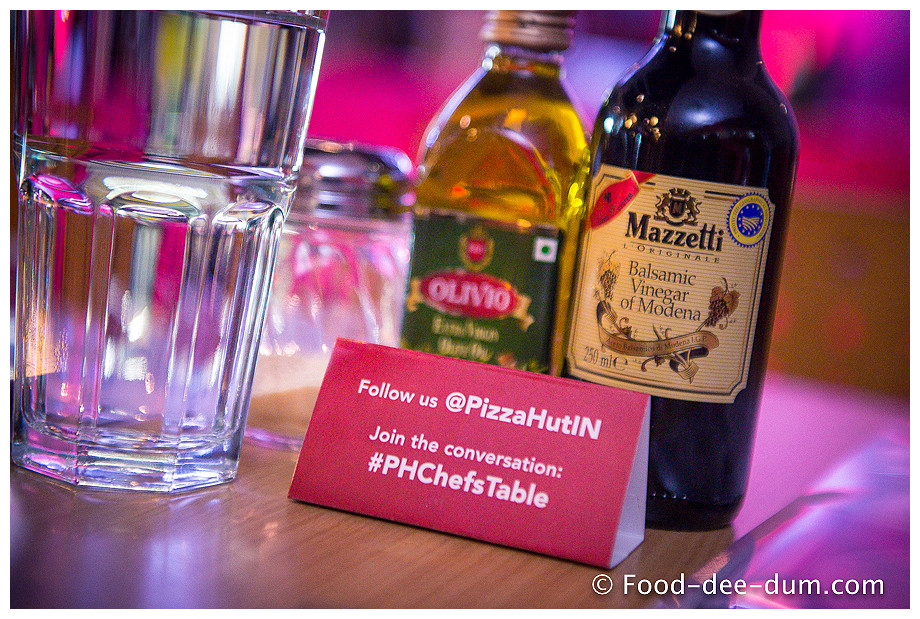 In addition to talking about their respective brands, the evening was really about a lot of pasta – conversation, tips and tasting. There was a special “Menu of the Day” created to showcase the wide range of pastas and demonstrate a few different different recipes.

Fun Fact: there are over 350 shapes of pasta in Italy. So you could eat a new shape every single day for a year! What fun 🙂 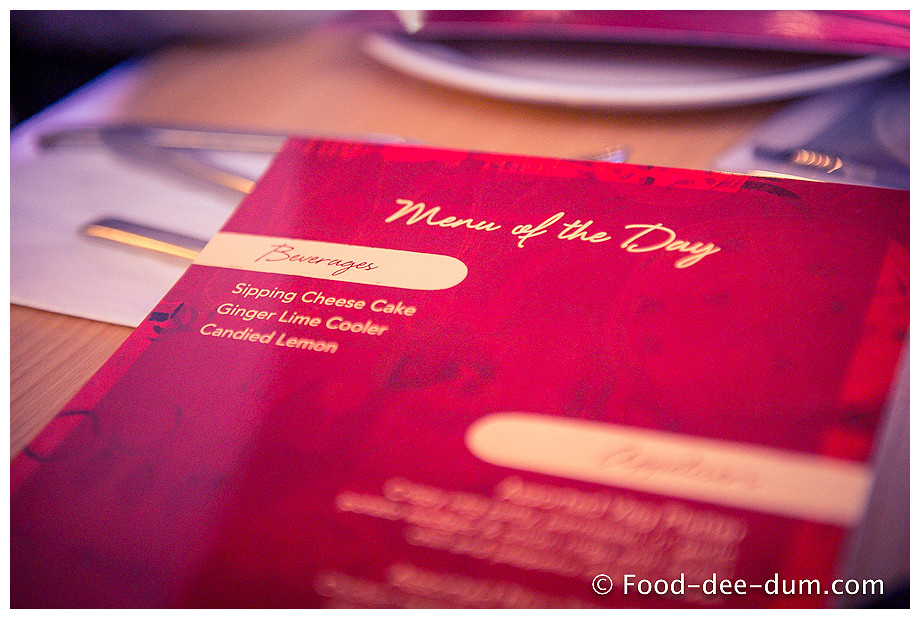 4 pasta recipes were demonstrated by the chefs, taking turns, and we all got tasting portions of each. In addition, they also served refreshing beverages, some appetizer platters, thin-crust hand tossed pizzas and dessert. I decided to go easy on all that since I wanted to save my appetite for the pasta dishes! But here are a few photos for you anyway. 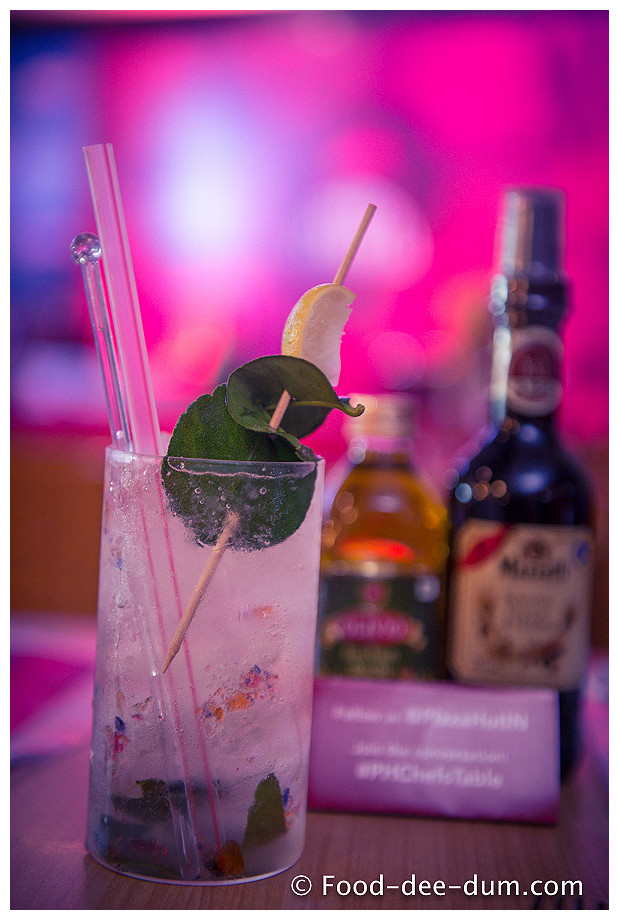 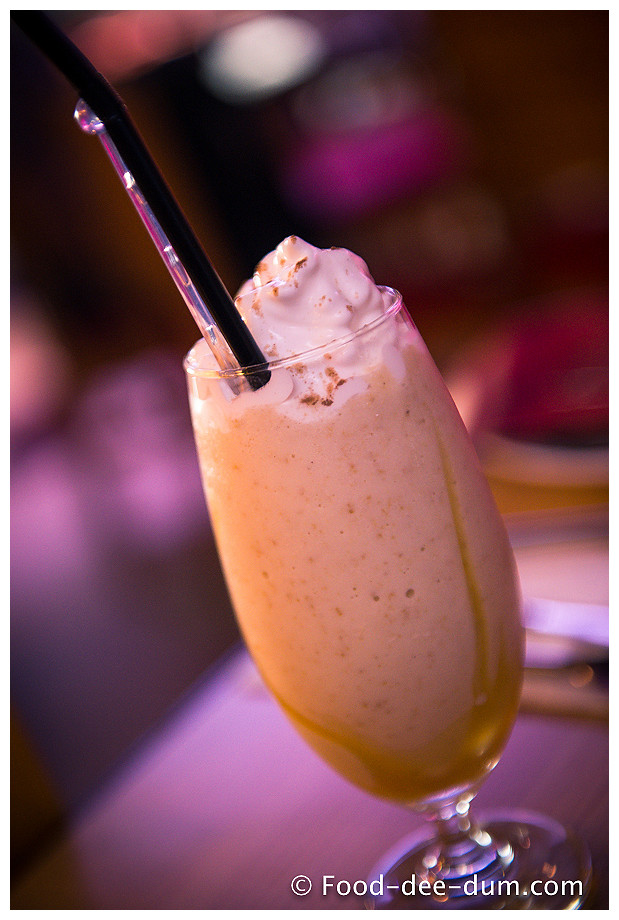 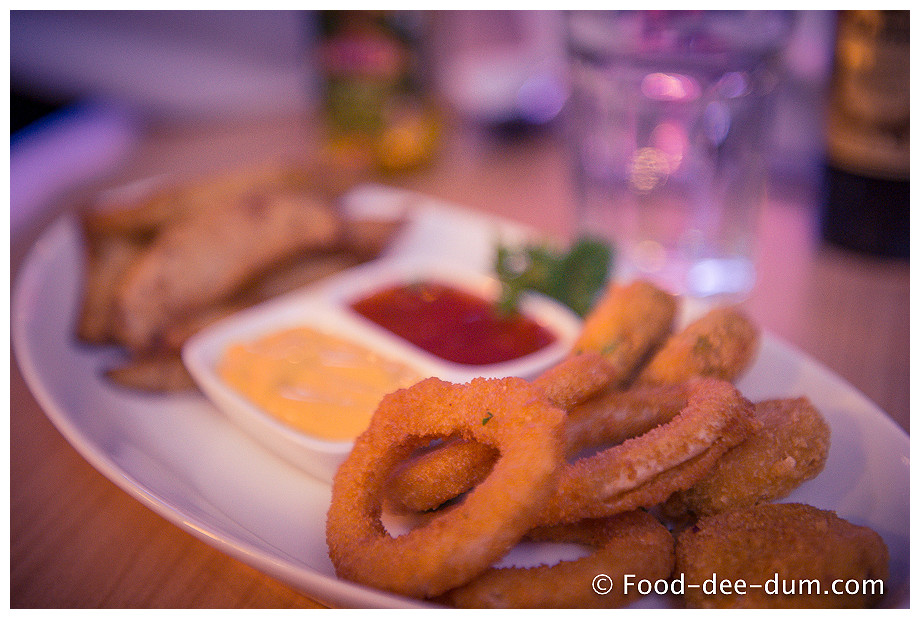 Let the demonstration begin!! As the chefs prepared each recipe, we discussed them — what went into each and why it was made a particular way, the history and importance of ingredients and methods etc. 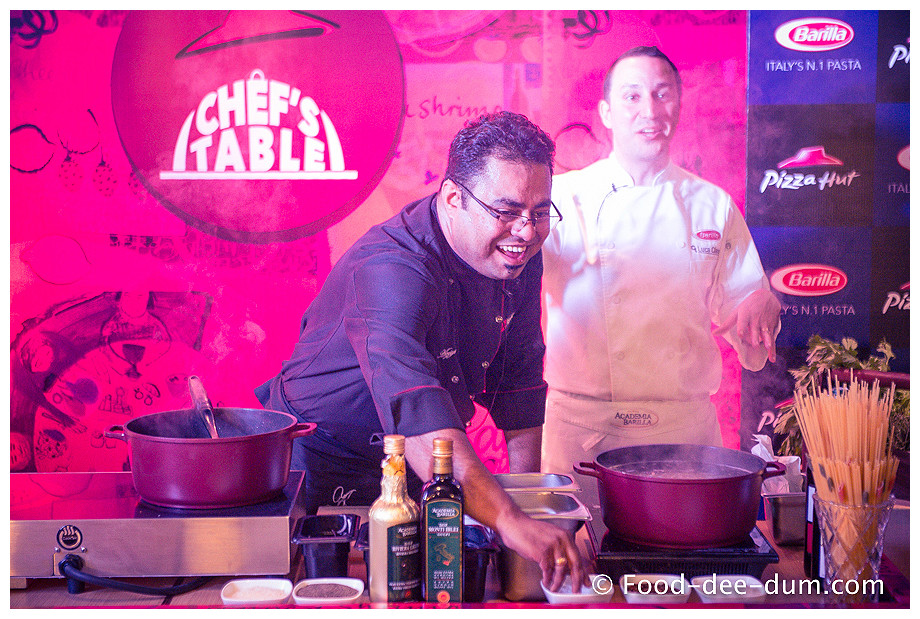 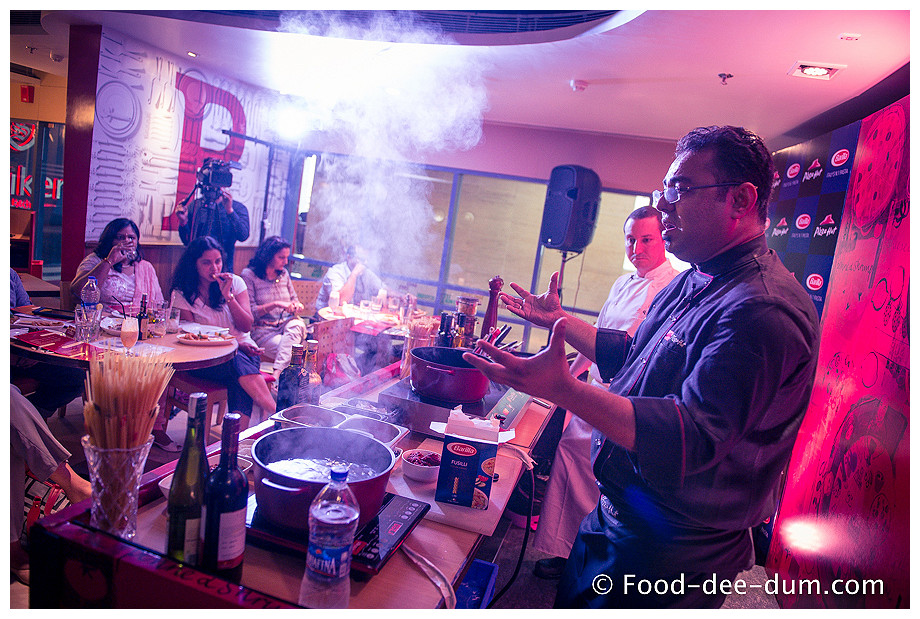 During the preparation, one of the interesting things to note was the difference in preparation by Chefs Arjyo and Luca. The techniques of preparing the pasta itself were the same but the saucing was quite different. Before I explain, let me segregate the recipes: Arjyo made a Red O White pasta (tomato and cream sauce with vegetables like babycorn, zuchini and peppers) and a Chicken Lasagne Bolognese; Luca prepared a Warm Spaghetti Salad with Prawns marinated in lemon-oregano and topped with toasted breadcrumbs as well as a Penne Rigate with a Sicilian Vegetable Caponata, served with salted ricotta and toasted pine nuts. 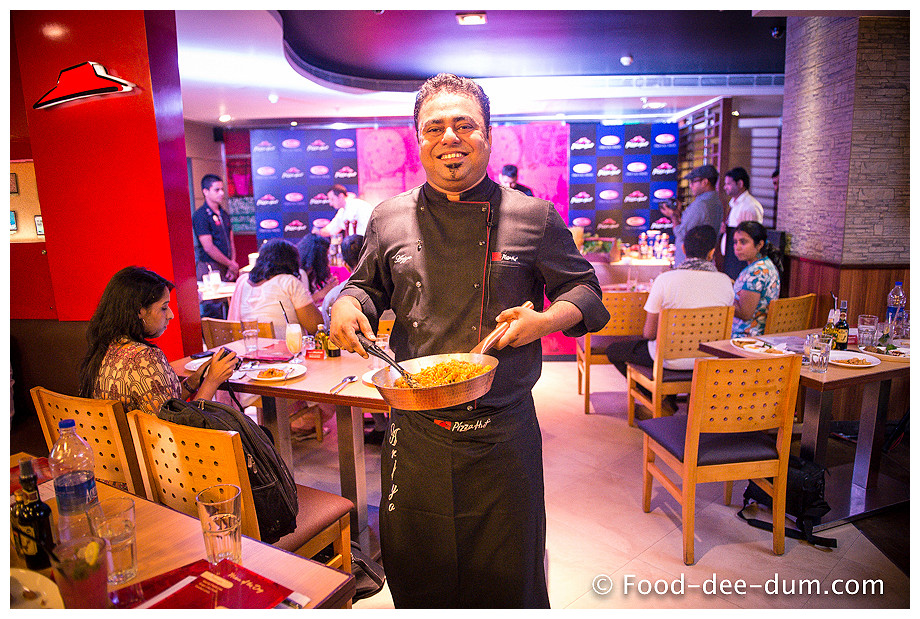 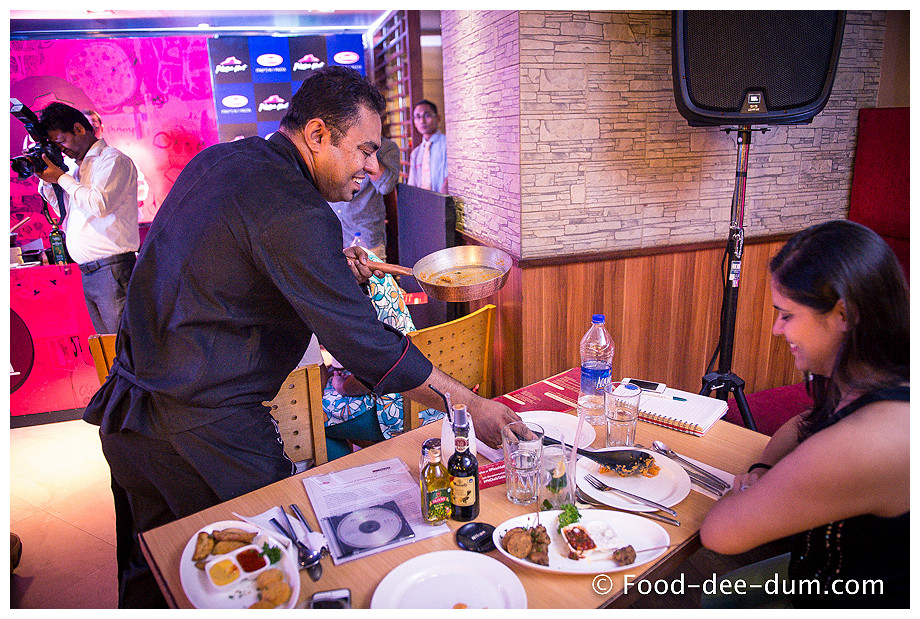 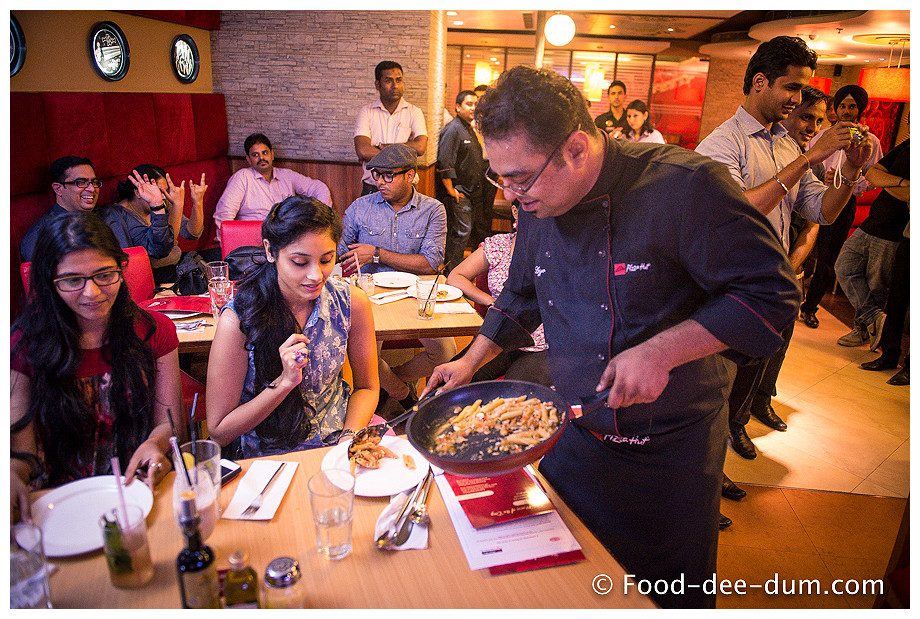 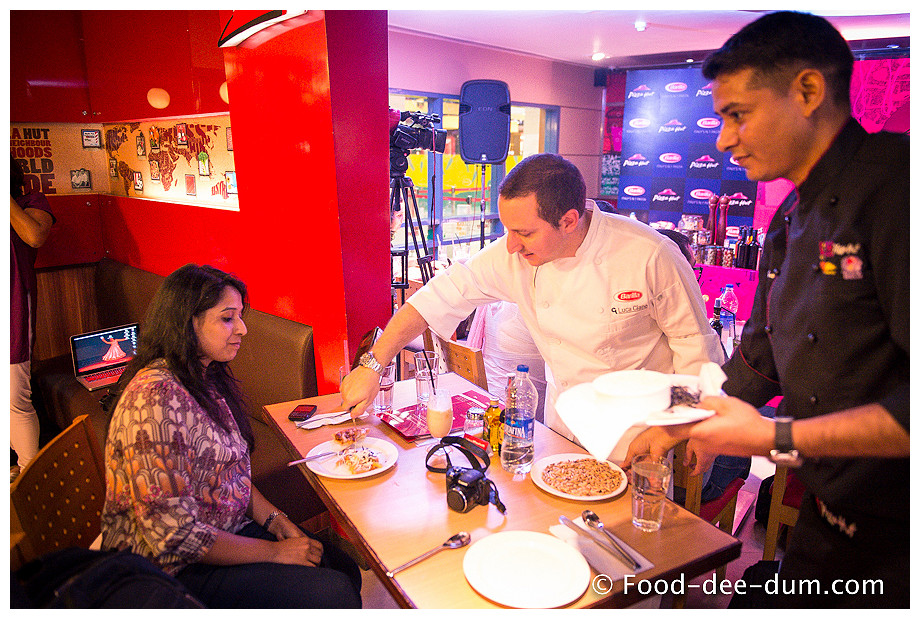 Arjyo was showcasing recipes which are likely to be introduced in Pizza Hut shortly and had a slight Indian influence — neutralising a tangy tomato sauce by adding cream, thus making the usual confounding choice about Red or White sauce defunct and catering to a wider audience. Also, this was a more “saucy” preparation, but that’s how we Indians generally like it. 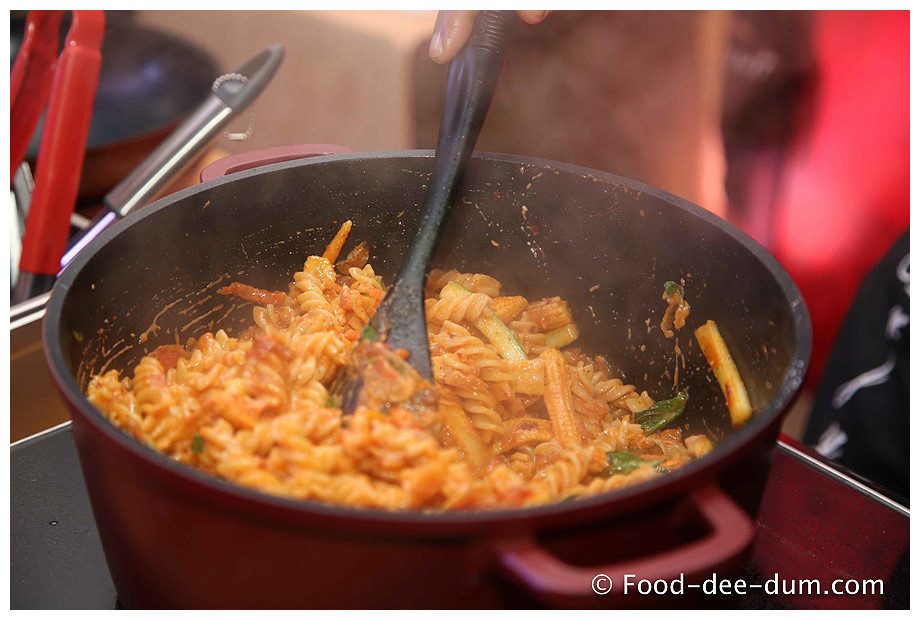 The Lasagne Bolognese was made with chicken mince instead of beef or lamb, but the balance of the bechemel and the bolognese was explained very well as was the assembly process. I volunteered to help with this by the way… 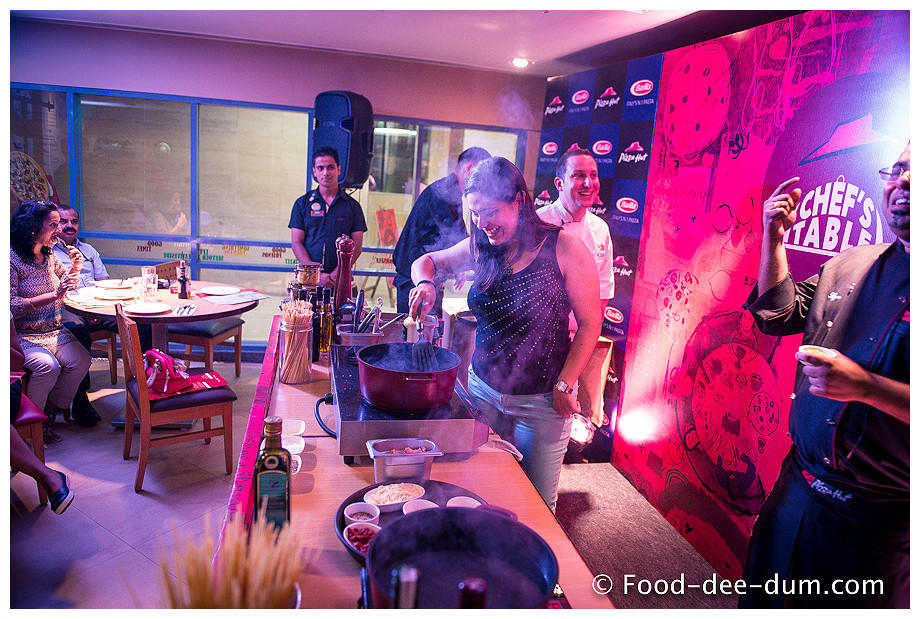 Luca’s recipes, on the other hand, were about sharing how the Italians do it. They were peppered by discussions about produce and ingredients from Italy as well. His recipes allowed the pasta to really shine through, without depending on the sauce alone and there were layers of flavour and texture making everything very interesting for us. For example, the prawn in the warm salad was not cooked – it was simply deveined, slashed a little, marinated in lemon, olive oil and oregano (the marinade cooked it almost fully through in a few minutes — like ceviche) and then tossed with warm spaghetti so that the heat would cook it the rest of the way. This is very different from the usual grilled/ tandooried/ curried/ batter fried prawns that we may have in Indian/ Oriental cuisine. Topping this dish with toasted breadcrumbs, seasoned with garlic and lemon elevated it to a whole new level. (This was definitely my favourite preparation from the entire evening. You may have guessed by how much I’ve described it — I actually scrapped a few sentences because I felt I was too biased!) 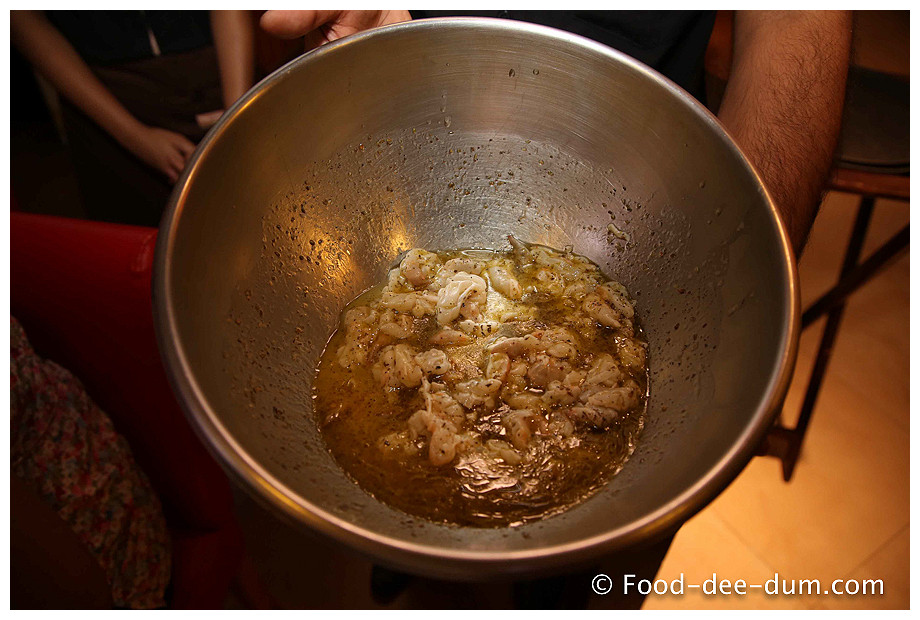 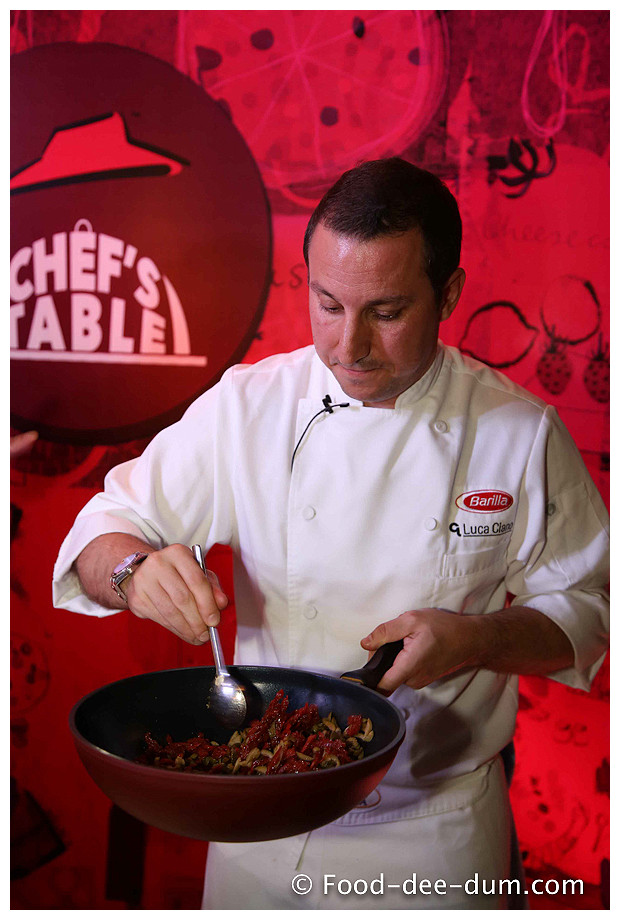 Similarly, Luca was not to know that the average Indian does not consider baingan (eggplant/ aubergine) an important enough vegetable to be consumed outside of home – but it is an important component of the caponata. Despite the perception of baingan in India, the finished dish topped with salted ricotta and toasted pine nutes surprised and delighted the attendees equally and it was almost the favourite of the crowd. 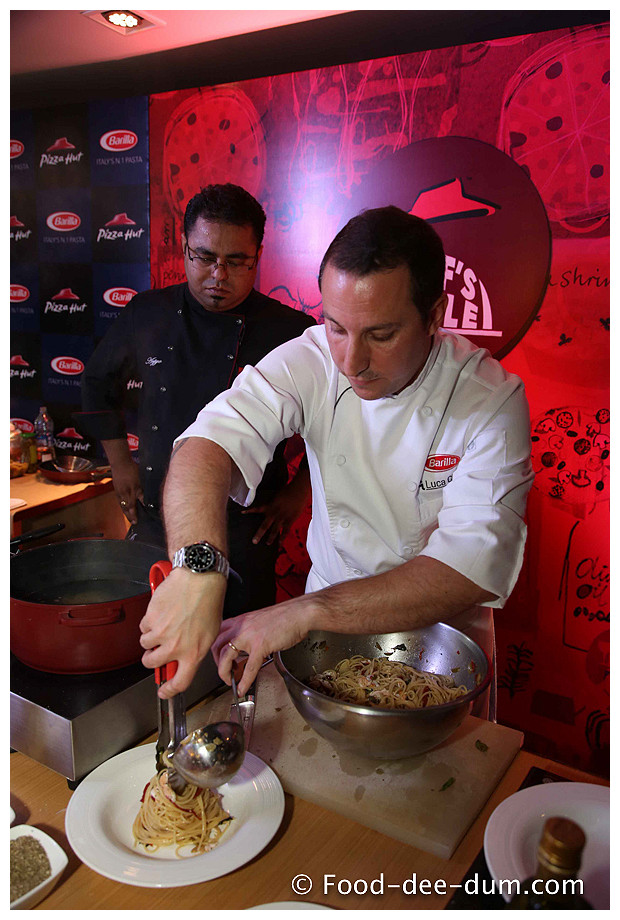 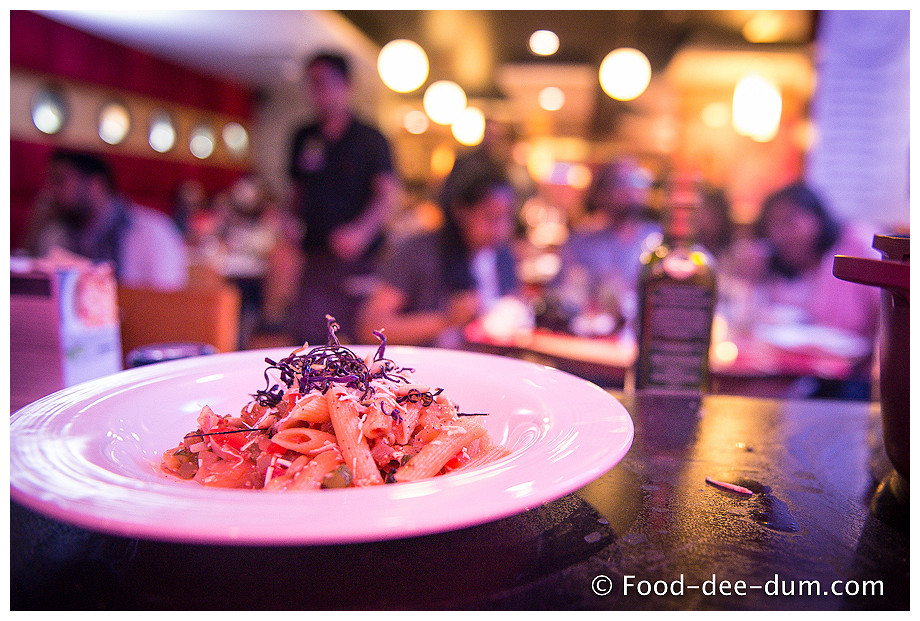 All in all, it was an enjoyable evening with a lot of food and banter!

A few things learned about the preparation of “Perfect Italian Pasta”:

Other things to know about pasta: