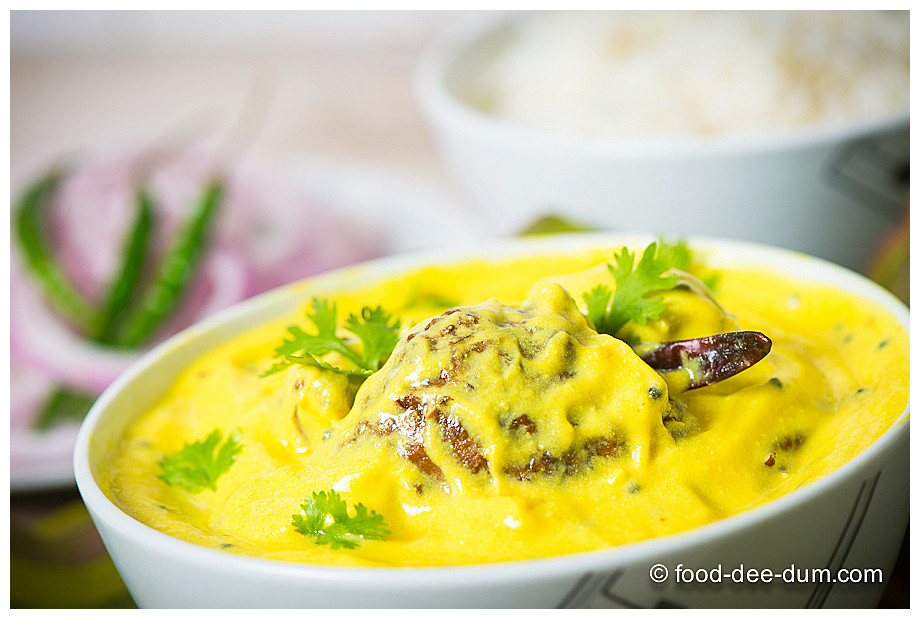 Or what Punjabi food means to me.

I know that for some people, Punjabi cuisine throws up images of butter-loaded paranthas, chholey-bhature, sarson ka saag & makki ki roti, dal makhani, tandoori chicken etc. For me the first image is always Dahi Kadhi with rice. Preferably accompanied with aloo methi sabzi (dry potato and fenugreek leaves) and lots of lachha pyaaz. Unlike sarson ka saag, it is not seasonal and can be enjoyed any time of the year – it’s silky and (slightly) sour yoghurt-based curry very delicately spiced. Traditionally, it contains pakodas/ fritters which form the “pieces” in the curry but if you want a lighter meal, like I usually do, you can replace the pakodas with  some boiled+chopped spinach and crunchy chopped onions. Or, if you’re only concerned with cutting down a few steps and not making the meal lighter, then add store-bought crunchy boondi instead! Or, just have the curry plain – in all it’s unadorned glory.

I variate it, according to my mood. But irrespective of the “pieces” in the curry, it always has the same effect – utter and complete satisfaction accompanied by that unbeatable feeling of having come home!

Mixing 1/2 tsp of salt to the dahi, I left it covered on the counter overnight to let it sour. If you already have sour dahi which you’re trying to use up, then you can skip this step and add the salt in the next step. 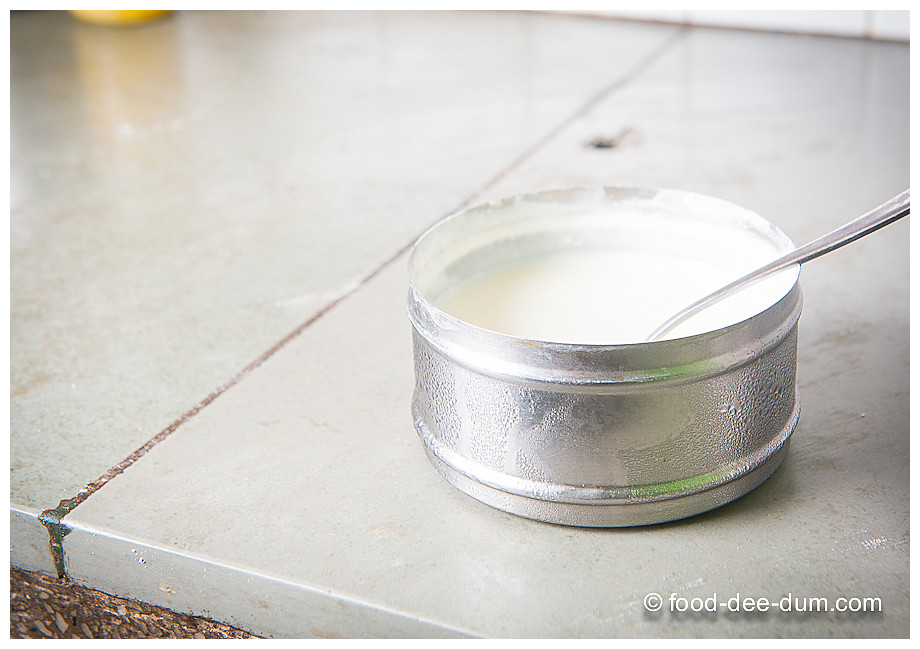 The next morning, I added the besan, balance 1/2 tsp salt, minced ginger and haldi to the dahi and mixed it well, ensuring that there were no lumps. 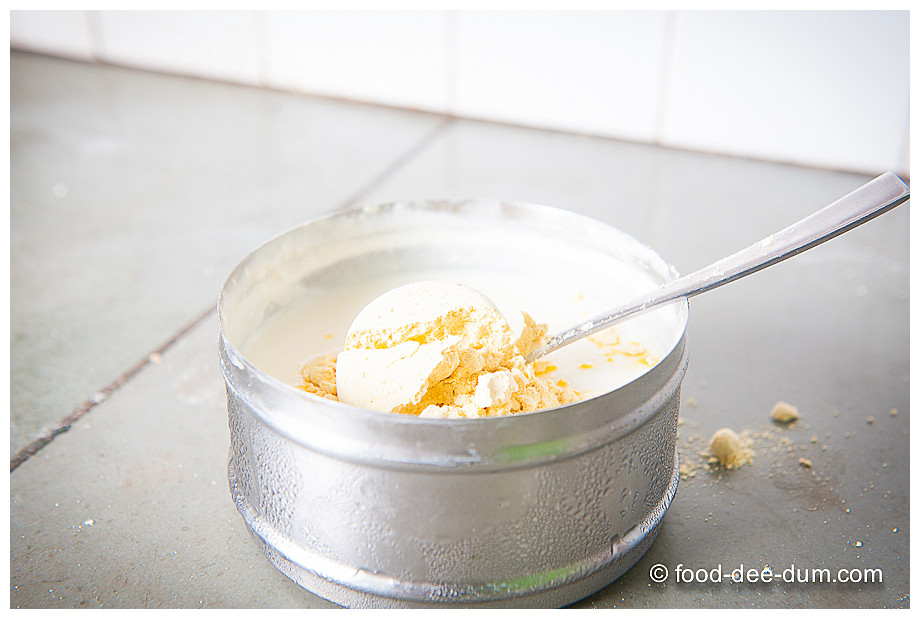 In a saucepan, I heated the mustard oil and added the red chillies as well as mustard seeds. When the seeds started sputtering like crazy, I took the saucepan off the heat. Once the pan seemed to have cooled down a little – about 2-3 minutes later – I carefully added the dahi mixture and stirred it to combine. This is important because sometimes the heat may cause the dahi to split/ curdle. 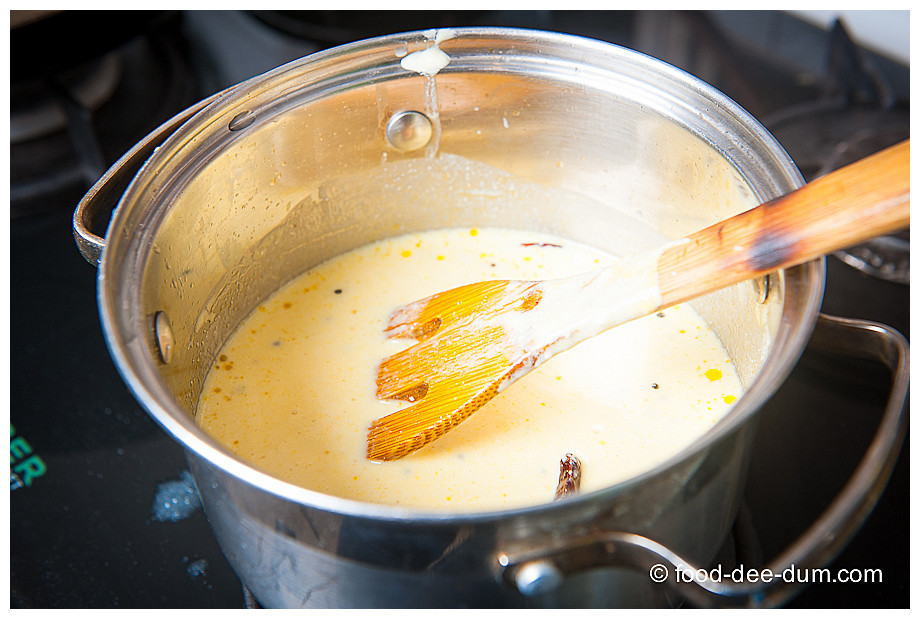 Adding 1 cup of warm water to the mix, I placed the pan back on medium heat and allowed it to come to a boil, stirring occasionally. Once it came to a boil, I reduced the heat to low and continued to simmer it for about 10-12 minutes. Turning off the heat, I allowed the kadhi to rest for a few minutes while I prepared the pakodas.

I filled a kadhai (wok) with about 3-4 inches of oil and placed it on high heat. While it was heating I prepared the batter – placing all the pakoda ingredients in a mixing bowl. 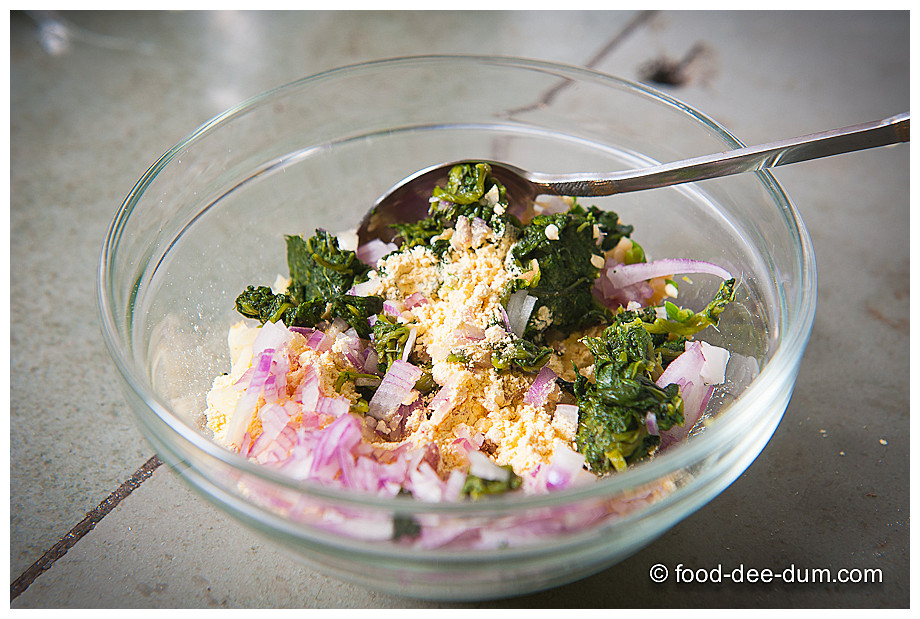 Adding water, little by little, I mixed it up to form a batter of dropping consistency. 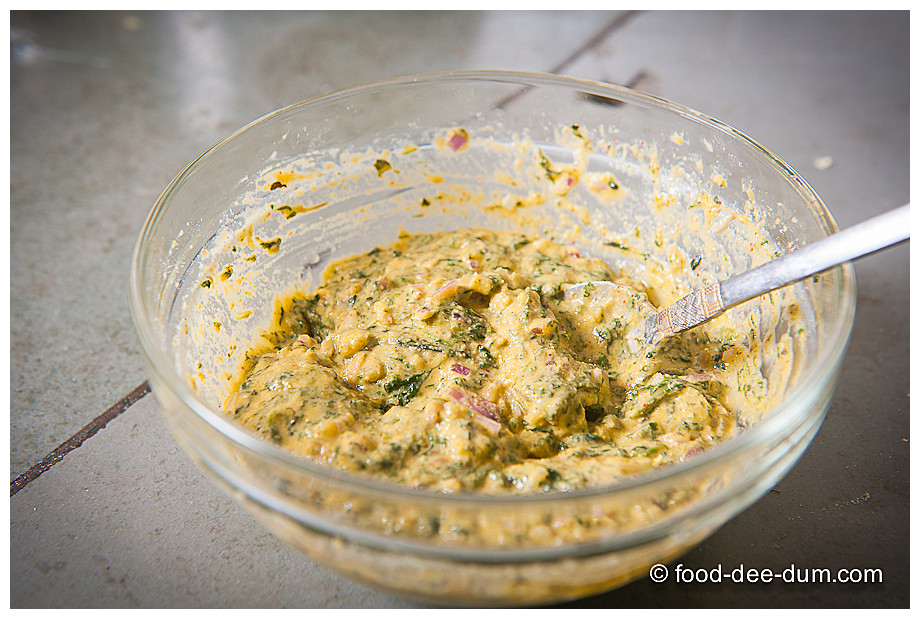 Many people add less or no spinach at all and make the pakodas mostly with the besan. In my opinion, that results in slightly harder and drier pakodas whereas I like mine soft and moist.

Testing if the oil was hot enough – by dropping in a small piece of onion and watching it sizzle immediately – I started adding the batter by the tablespoon (not too heaped) to deep fry till golden brown. The kadhai should not be too crowded so 3-4 pakodas at a time is usually a good idea. 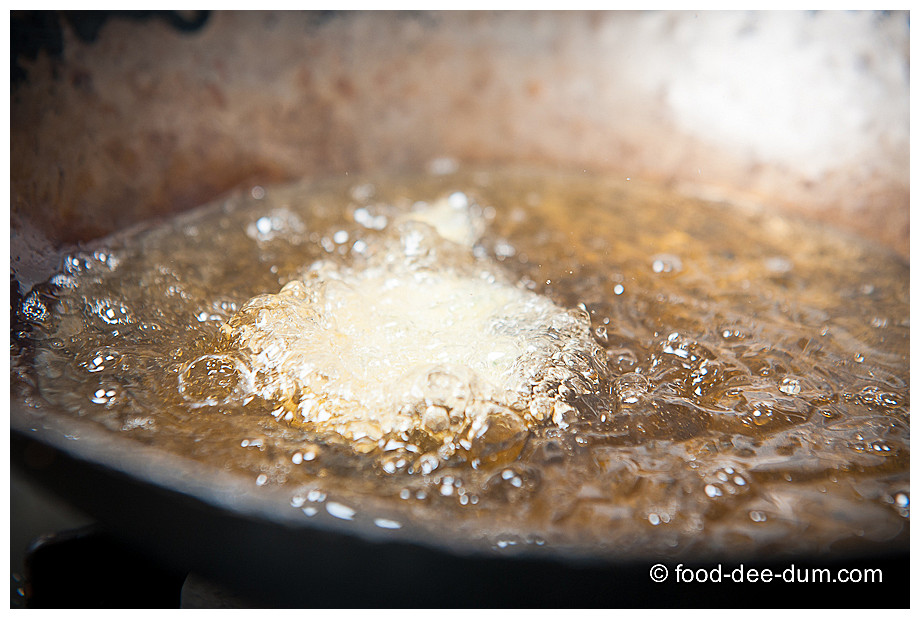 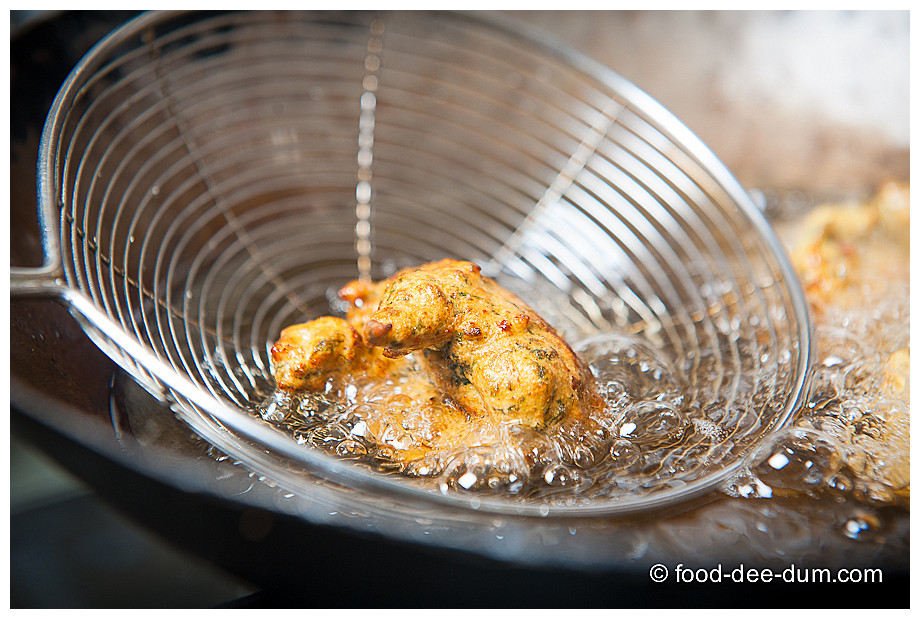 Lifting them out with a slotted spoon when done, I placed them on paper towels to drain and cool slightly. I got about 12 pakodas. 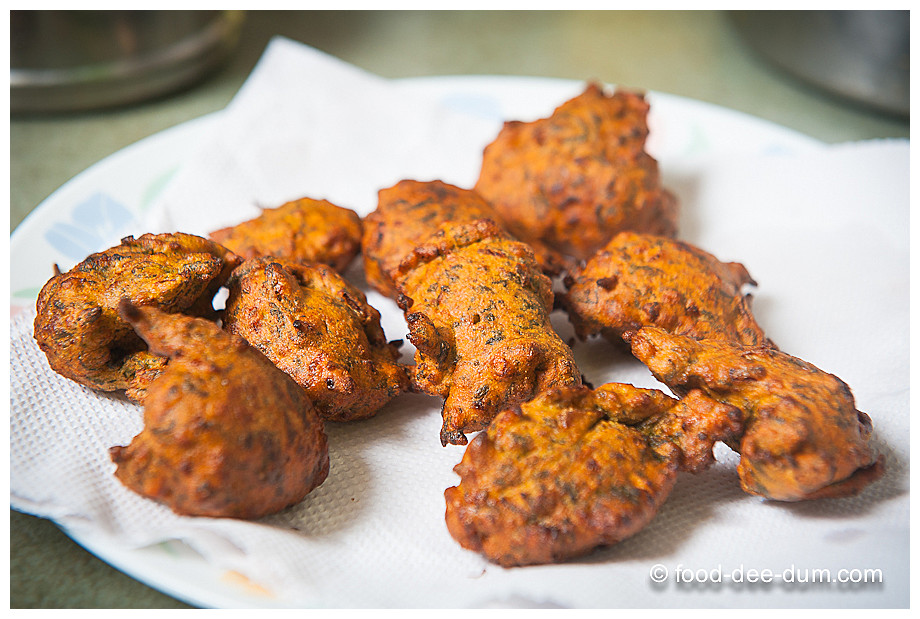 Adding these pakodas to the kadhi, I placed it back on medium heat and cooked it covered for about 10 minutes. 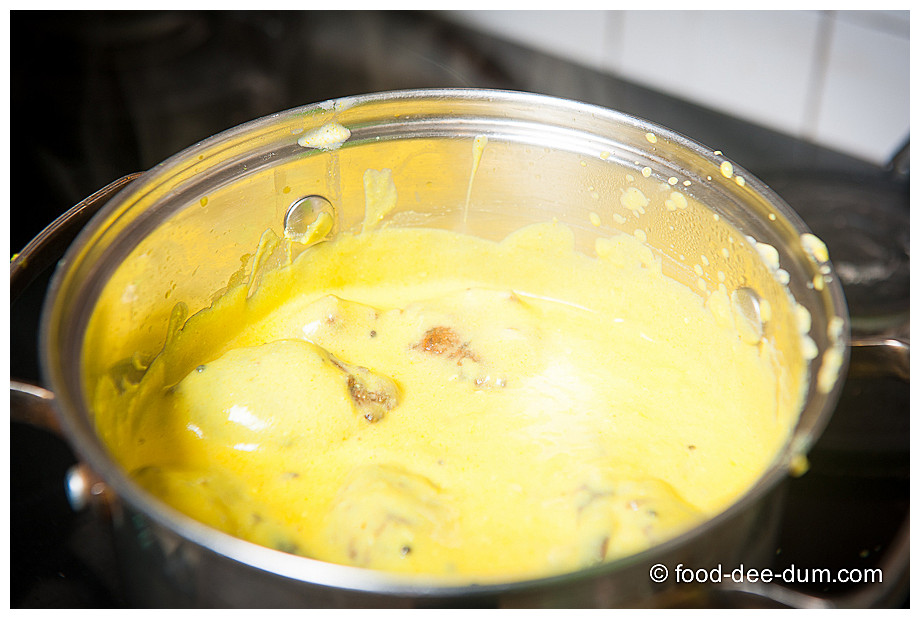 Garnishing it with chopped dhaniya (cilantro), I served it up with steamed rice and lachha pyaaz. A ginger/ garlic/ chilli pickle on the side would also go well. 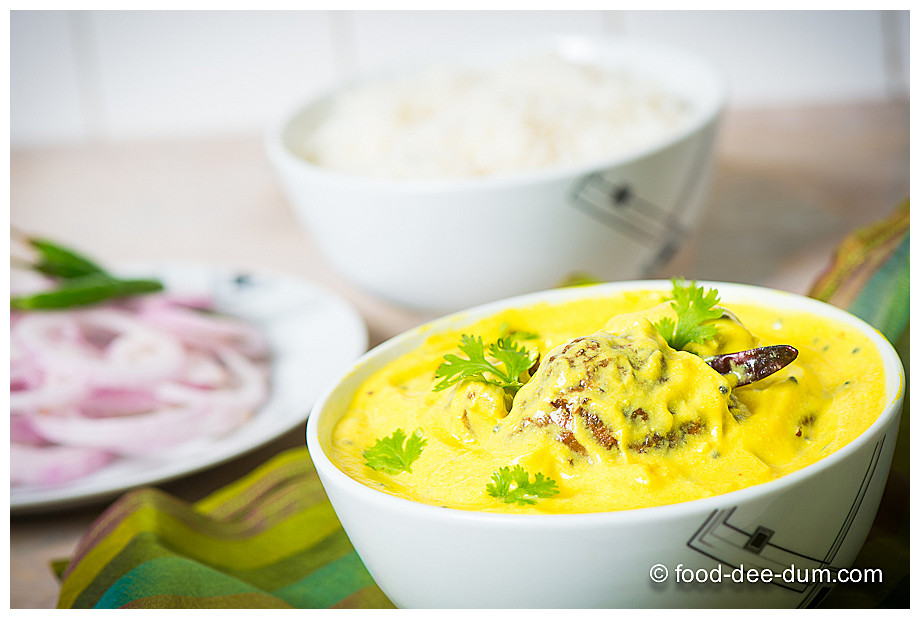 I always like to make a little extra because I love eating cold kadhi (straight out of the fridge) the next day! 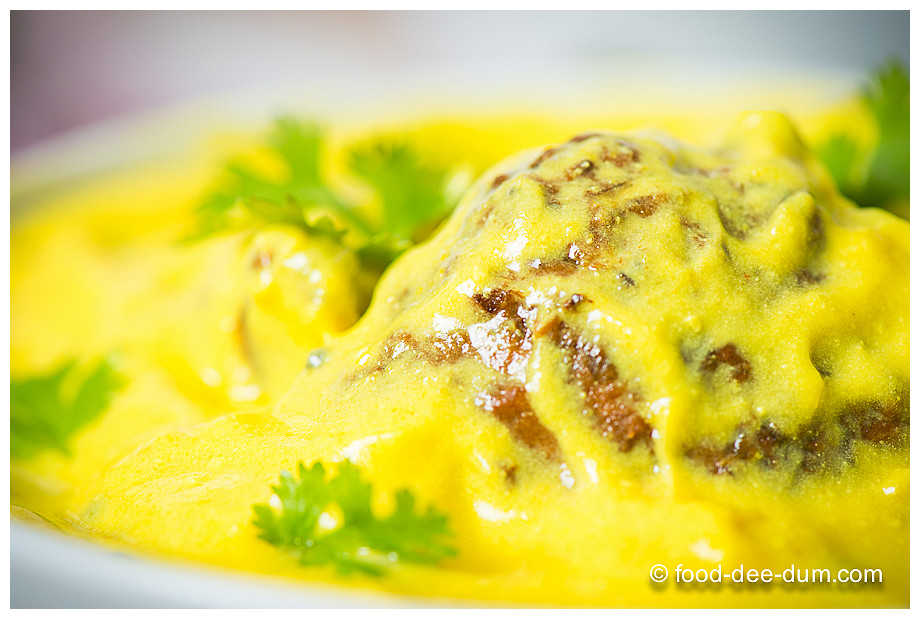