Krispy Kreme, a name synonymous with doughnuts and coffee, is finally set to enter the Delhi market this December.

After months of rumours, it has been confirmed. Straight from the horses mouth. With a box of pre-launch doughnut samples thrown in! Last week, we received a box of 12 Original Glazed doughnuts, flown in fresh that morning from Bangalore and delivered personally by a gentleman from Bedrock (the franchisee for North India).

Now I can’t say much about the various flavours/ toppings that they are set to offer because we only tried one kind — their signature doughnut, the Original Glazed. But this one lived up to its reputation. It was soft, light, airy and melt-in-your-mouth. Even though they were made many hours earlier that day. And all this while being egg-less. Apparently that’s a policy and a special recipe developed only for the Indian market. 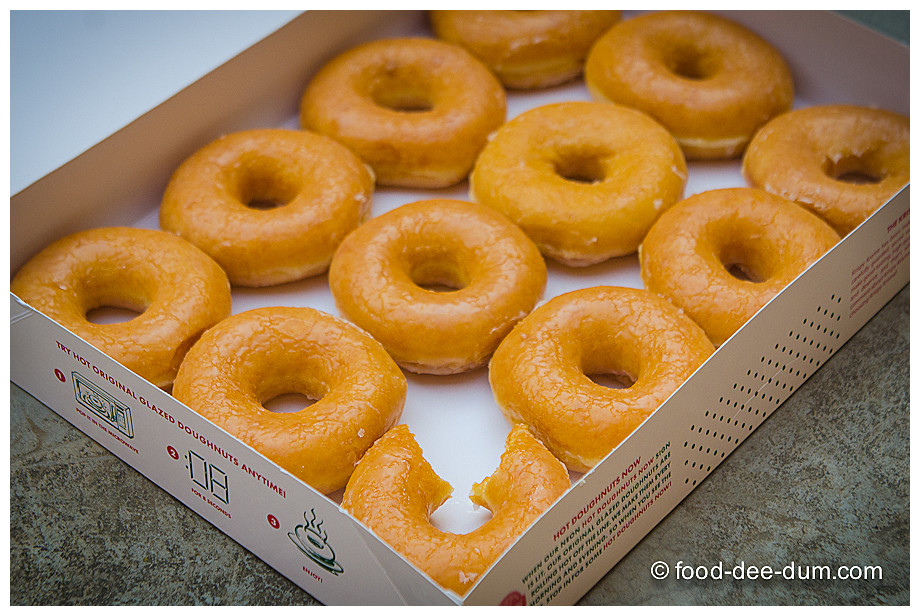 Yes, those are bite marks. And I’m not ashamed of them 🙂

The box said that the best way to have them (if not hot off the line) is to microwave them for 8 seconds. But Arjun decided that the right time is 6 seconds — I didn’t re-heat them at all and they lasted beautifully until Day 3. If you read this blog often, then you may know that I can only take sugar/ sweet in small doses so having the doughnuts with my (un-sugared) coffee helped to balance out the sweet for me a little. Now that AK has had a taste of these, nothing has been measuring up of late. But what I am really excited about is seeing the famous Doughnut Theatre in action – which is a trademark of the Krispy Kreme stores all over the world. Watching fresh doughnuts coming off the line and grabbing a few while they’re hot sounds like the perfect plan. Maybe I could even do it everyday. Just maybe.