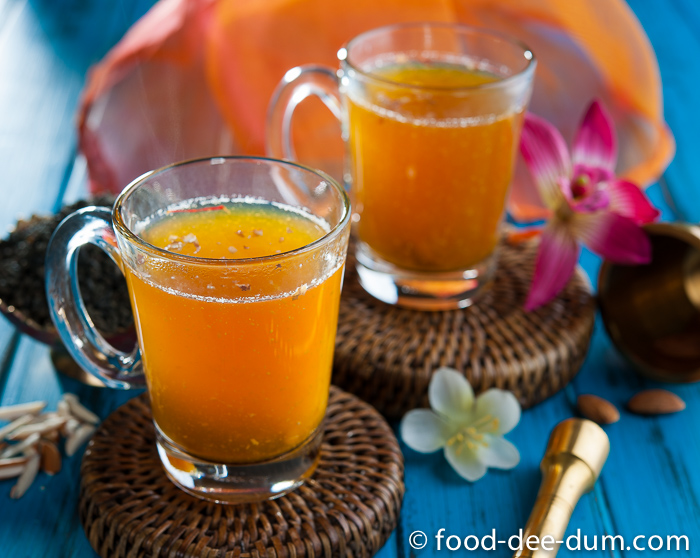 I think I was about 13 or 14 when I had Kahwah (also Qawah or Kehwah) for the first time. One of my mom’s closest friends is married into a joined family and, for the longest time, the 4 brothers along with their wives and children lived in one big building – each had a floor of their own and a separate kitchen. My favourite part about spending time in this house was that there were 4 different, delicious meals prepared in each kitchen for every single mealtime and I could hop across to any or all of them and sample what each of them had to offer! I over-ate and stuffed myself silly on every single occasion for almost 10 years and I sometimes take the liberty of (unreasonably) blaming them for my sudden chubby teens. I clearly didn’t believe in sports and exercise, but that had nothing to do with it.

Two of these lovely ladies hailed from Jammu and they favoured this Kashmiri Kahwah in the winter, in addition to the standard doses of tea and coffee through the day.

Growing up, we weren’t really allowed to have tea but this Kahwah was an exception. It is sweet, fragrant and uses Kashmiri green tea, which my mom thought was okay for us to have! And I couldn’t have been more delighted when I had the first of my many cups.

The ladies would buy big bags of the tea from their visits to Jammu and share them with friends and family and taught us all how to prepare this delicious beverage. My mom and I have been addicted since. We make it a lot at home and, without fail, flock to the Kahwah counter during weddings. I promise you will feel the same way, if you don’t already.

It is incredibly simple to make and doesn’t require many ingredients or steps.

Kahwah tea leaves are easily available at grocery stores but if you can’t get your hands on it, then just use regular, unflavoured green tea (loose tea leaves). In addition, all you need is cardamom, cinnamon, saffron, sugar and almonds. That’s it. Really. 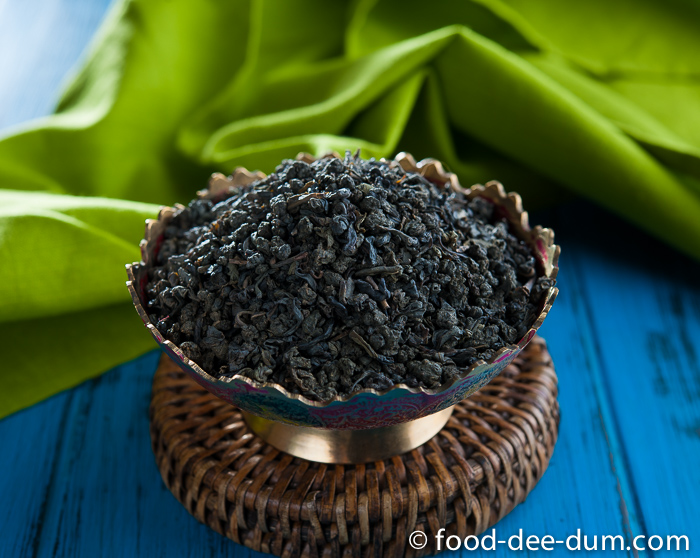 The fragrant tea is poured over crushed almonds (or walnuts). Strangely, nobody ever hands you a spoon to finish off the almonds at the end and I always end up fishing them out with my fingers! There’s something so comforting about digging into your food with your hands, no? Unless you’re out for a formal meal of course. 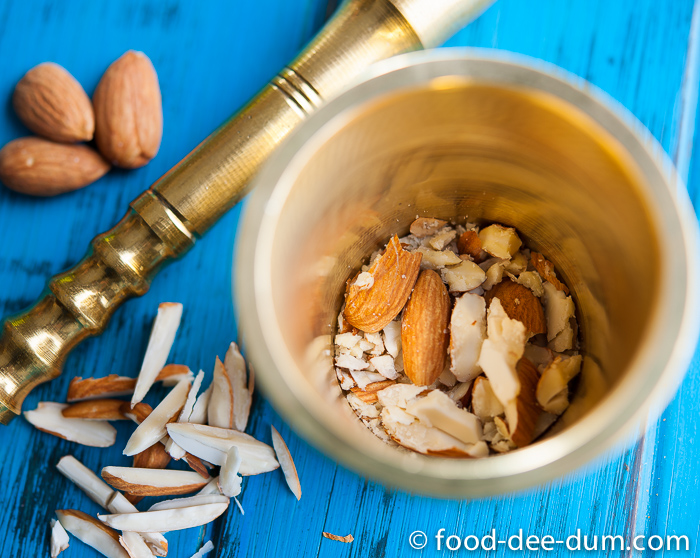 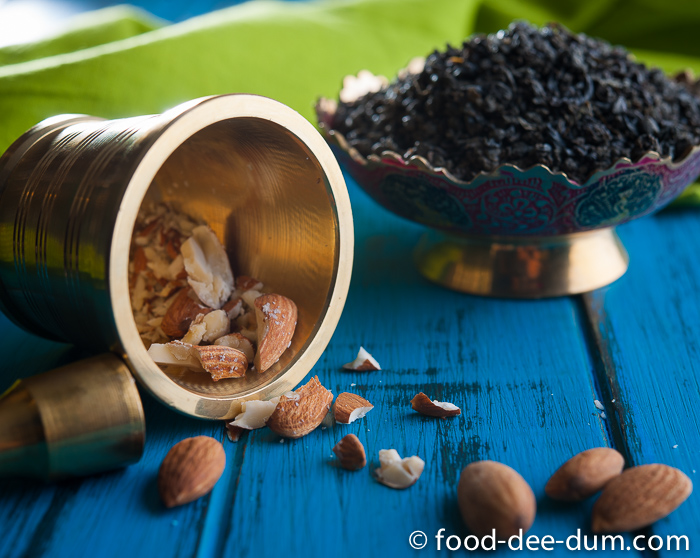 Traditionally, Kahwah is served in a copper samovar. It is a vessel in which the kahwah can be prepared and kept warm because it has an fire-container inside where hot coals can be placed to heat the beverage. But I’ve only ever seen this at weddings and haven’t come across one that I can buy and use. Yet.

Here’s what you need for 2 servings:

4 elaichi (green cardamom pods)
1/2 inch piece dalchini (cinnamon bark) — you can use pre-powdered cinnamon too but use just a pinch or the kahwah will become more brown than golden
2 tsp sugar — you can use honey, if you like, but I prefer sugar
Generous pinch (about 4-5 strands) of kesar (saffron)
1 heaped tsp kahwah/green tea
2 tsp crushed/finely sliced almonds

Here’s how to make it:

Bruise the cinnamon, cardamom and saffron using a mortar pestle and place them in 2 cups of water along with the sugar. Usually I don’t add sugar to my tea or coffee but this is an exception. Don’t skimp on this, unless you’re diabetic. Trust me. 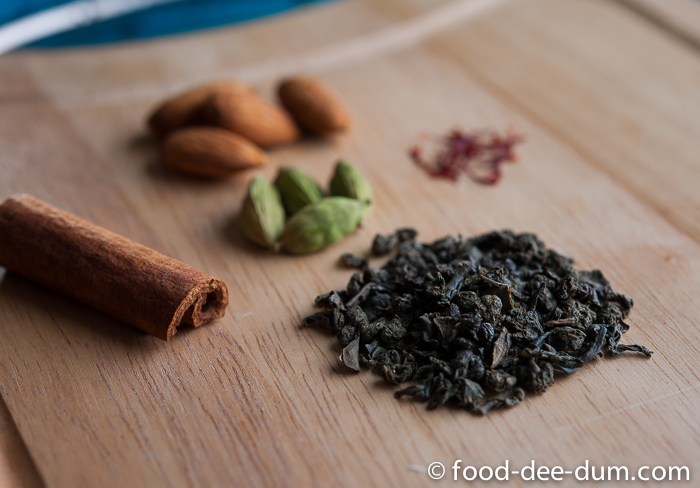 Bring this to a rolling boil, add the tea leaves and turn off the heat. Cover and let the tea steep for about 3-4 minutes.

Boiling the sugar with the water is an important part of the process. Stirring it in at the end doesn’t quite have the same effect. I don’t know what the science behind that is, but I do know it’s true. I’ve tried it both ways. This method seems to bring out the warmth and sweetness of the cinnamon and saffron, which is a good thing as far as I’m concerned.

Strain the tea and pour it into 2 cups. This is how clear and golden it looks before the crushed almonds cloud it up. Divide the crushed almonds between the cups and serve hot, with an additional strand or two of saffron for garnish. And extra sugar, on the side, for anyone who may like it even sweeter!

PS: Nowadays, I believe there are tea bags and infusions for Kahwah, which contain all the ingredients except sugar and almonds. I haven’t actually tried one of these but, in theory, I think that boiling the spices with the water brings about a richer, warmer flavour than simply pouring hot water over a pre-mix. But if you would like to use one of these pre-mixes, I promise I won’t judge. As long as you make it right away!

PPS: I’ve read about a few versions where milk is added to this tea as well, but those versions are few and far between. I haven’t been tempted to try it that way. I much prefer this masala tea recipe for when I’m in a milky-tea kind of mood.