I’m not a compulsive chocolate eater by any standards. More often than not, I even put non-chocolate desserts ahead of chocolate ones. Sad, but true. But this ganache might be the weakest link in my chocolate chain (I’m not sure if that makes sense in English but I hope you know what I mean). The thing is that I do love chocolate, the darker (less sweet) the better. The more intense, the better. The less adulterated by sugar+butter, the better. Get my drift?

Last Friday, we got a last minute invitation to a friend’s (friend’s) birthday party. Not knowing her likes & dislikes well enough to buy her a gift, I decided to take cake. Surprise surprise! And to play it even safer, I picked chocolate in some form.

Secondly, I had been dying to use my tube cake tin for the first time. I already knew that when I used it, I wanted it to be this combination/ recipe. Hence, two birds+one stone! And a happy birthday girl…

I used this recipe for the cake from Hannah’s blog. In fact, I had used this once before for my mom-in-laws birthday with orange marmalade filling and nutella buttercream. I didn’t manage to take any photos at that point so never ended up posting it. I will though.  I’m becoming braver with the camera and taking a lot of the photos myself, this post included. Which has the sorry side effect of not having enough photos of the “process” since I can’t balance the camera with one hand. Also the greater side effect of not matching AKs photos, but I’ll get there!

This cake was soft, rich and full of flavour even though all the flavouring used was some vanilla and the browned butter. But oh, it definitely did not need anything else! Well, maybe cinnamon. But I’m capable of adding cinnamon to everything. So don’t listen to me!

The ganache recipe is loosely adapted from Real Simple magazine.

First I browned the butter. I had a tiny disaster (oxymoron, I know) because the pan I used is not the one I usually do – which was not a good idea. Make sure you use a heavy bottomed stainless steel saucepan else it can go from butter to ghee or brown butter to burned butter VERY quickly! My usual saucepan was otherwise occupied with dosa batter in the fridge…

I cut up the butter and measured it. I know it looks like more than 3/4 cup but it looked better like this than when I squashed it in to make sure it’s the correct amount a few seconds later…

Placing this in (the wrong) saucepan, I set it on medium heat, stirring occasionally until melted.

Transferring it into another (not SO wrong but still wrong saucepan), I allowed it to cook some more until it foamed up like this and small brown flecks appeared… You don’t need to transfer, just use the correct saucepan in the first place! I was simply trying to do some damage control.

If you stir it at this point you will notice that the butter beneath the foam is slowly turning a caramel-ly golden brown. And kitchen will be full of the heavenly nutty, caramel-ly aroma. Lower the heat and cook stirring occasionally just until the butter is evenly golden brown, less than a minute or two.

Since I was using the wrong saucepan, mine developed a few darker brown (burning) spots very quickly. So this is what you have to avoid… 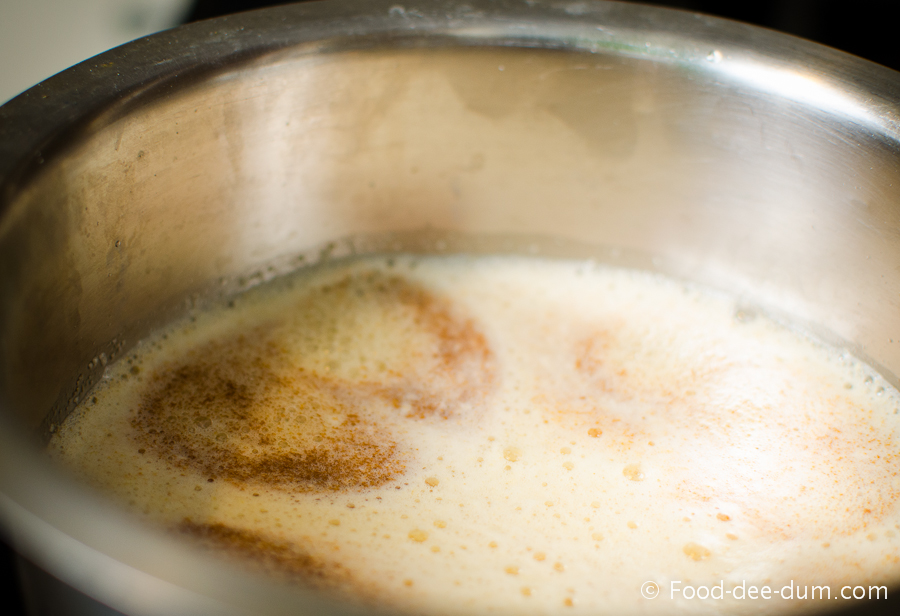 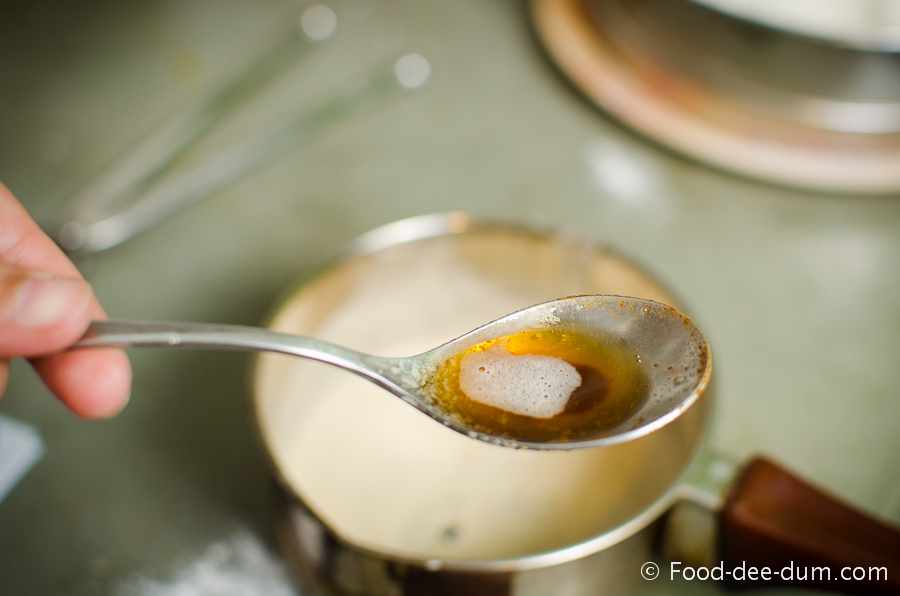 The colour of the butter here is perfect but that blackish-brown sediment is totally undesirable. So please don’t be like me. If your cool, heavy bottomed saucepan is otherwise occupied, make it a point to UN-occupy it! Oh and steel/ aluminium or other light coloured vessel is preferred over non-stick so that you can monitor the colour closely. And in other types of pans, there is a possibility that butter will boil and boil and turn into ghee without foaming the way it should. I’m not sure what the science behind it is, but I’ve learned my lesson. Well.

Moving on, I set the browned butter on a heat proof mat placed on my dining table to allow it to cool while I did the rest.

Turning on my oven to 150 C, I sifted the flour and baking powder together 3 times to aerate it well.

I prepared the pan – 10″ tube/ Angel Food Cake pan. It’s very difficult to line this with butter paper/ parchment paper so I just decided to grease it well (including the tunnel) with butter and dust generously with flour. I discovered that I was low on flour at home and didn’t have more than a tsp of it left for dusting the pan, so I combined it with almost a tbsp of cocoa.

Even though there’s no such thing as too much cocoa, I could have used 1/2 tbsp. But here’s what I got…

Make sure there are no blank spots on the pan and that it is evenly greased and dusted.

Next, I beat the sugar and eggs together until slightly thickened, using an electric beater on high speed for about 2 minutes. 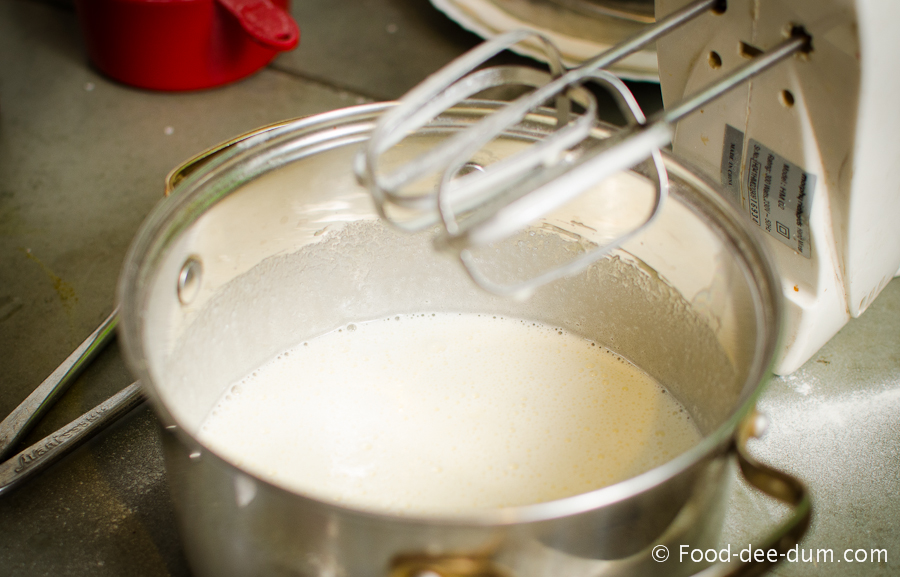 I then added the milk, vanilla and cooled butter, beating on  medium speed for another 1 minute until well combined.

Next, I added the flour in 2 batches and combined using a wooden spoon.

Poured it into the prepared pan and stuck it in the oven for about 50-55 mins, or until a toothpick inserted in the centre (between the outside edge and the tunnel) came out clean… 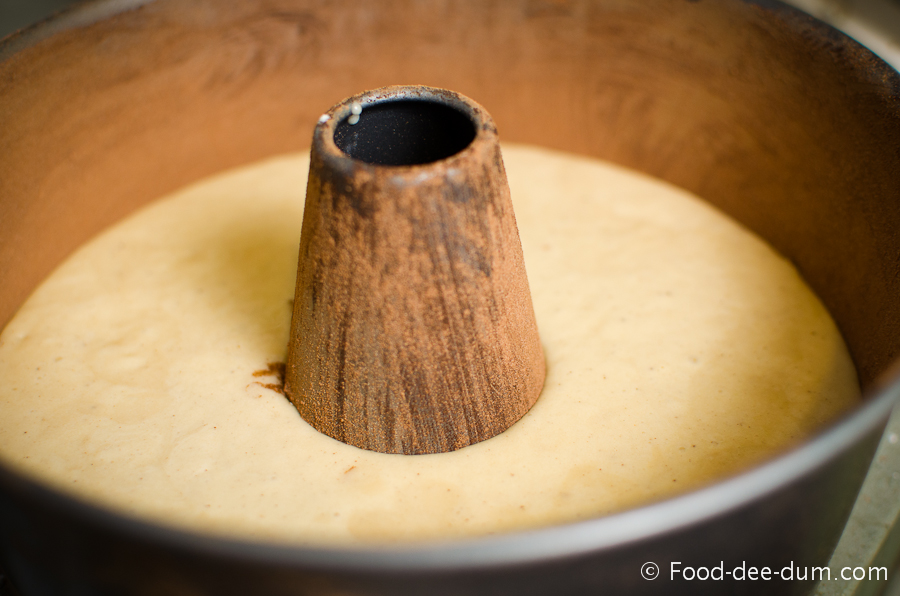 While the cake was in the oven, I weighed and chopped up the chocolate… 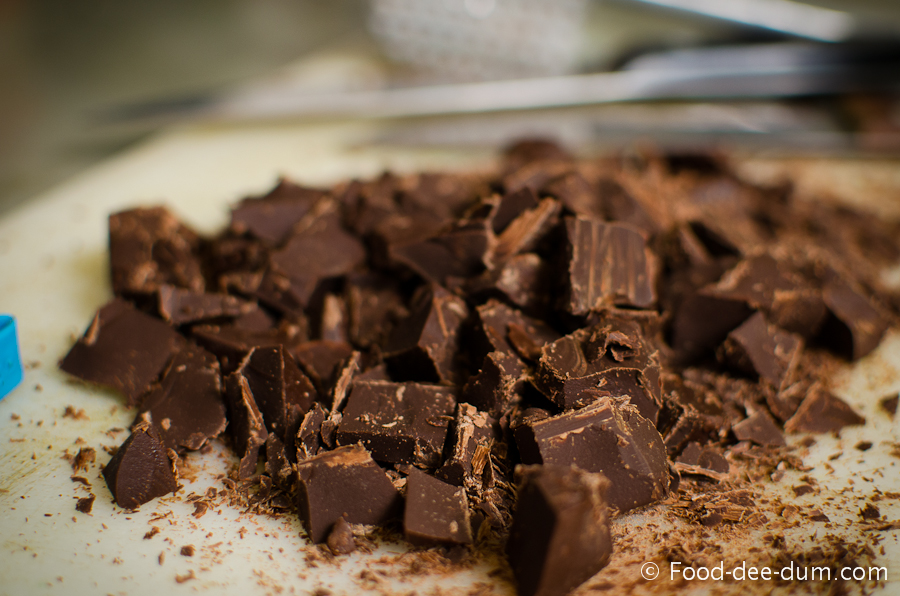 The photo makes the pieces appear larger than they were. It doesn’t matter much either way, but bear in mind that the smaller and more even the pieces, the better and more quickly it will melt.

Next, I measured out the cream and placed it in a heavy bottomed saucepan. I heated it on medium until it came to a boil. 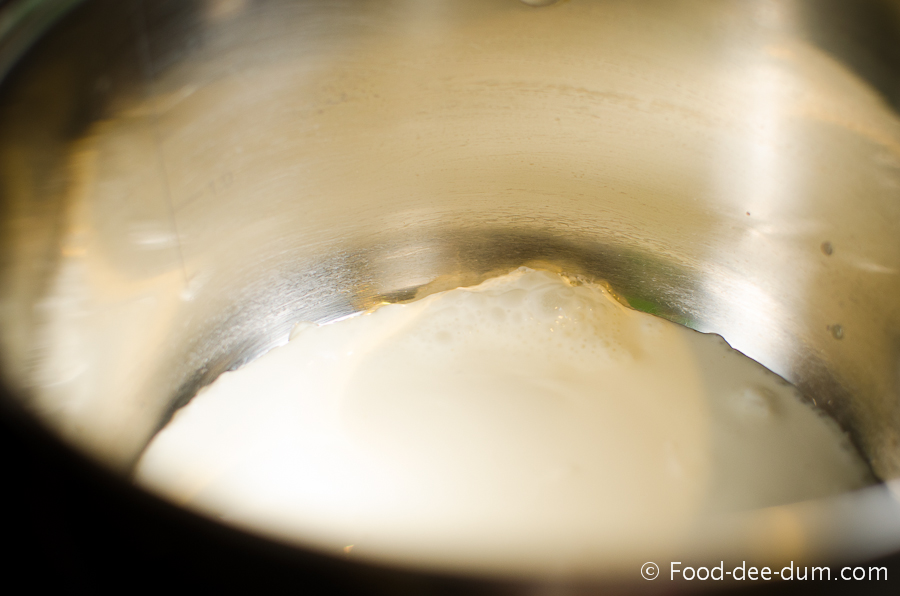 Turning off the heat, I added the chopped chocolate and stirred with a wooden spoon until the chocolate melted completely and combined with the cream.

Once it had combined, I added the butter and stirred it in… 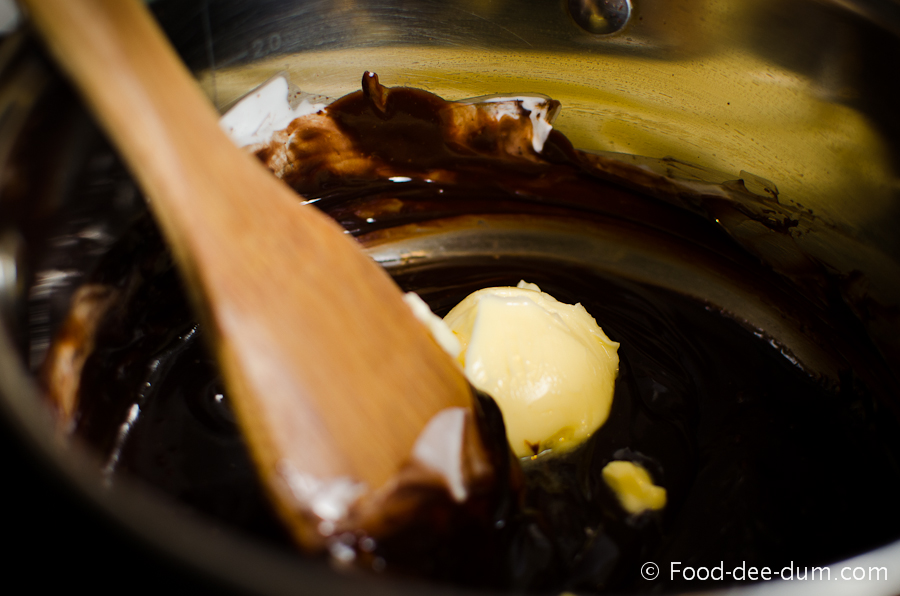 Once the butter was mixed in, it looked all smooth and glossy like this…

Setting it aside and letting it cool to room temperature, I went off to get dressed for the “theme party”. If you’re in a major hurry for the ganache, then you can place the saucepan over ice and whisk vigorously until it cools, thickening in the process.

Once the cake was done, I allowed it to cool for about 10-15 minutes in the pan. Then gently running a spatula between the pan and the cake, I inverted it on to a plate and let it cool for another 15-20 minutes. I was so pre-occupied with figuring out the details of outfit – I went as Playing Cards by the way – that I forgot to take a picture of the baked cake and also of while I was frosting it. So I ended up with the completed cake! 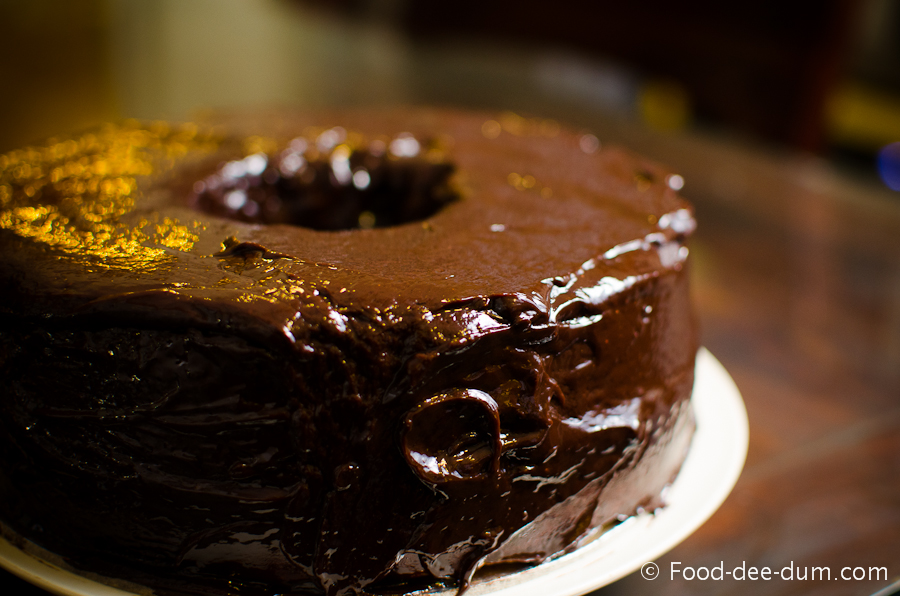 Like I said, this ganache might be the weakest link in my chocolate chain!! It was to die for and I’m so happy that I chose this recipe for my tube pan debut!