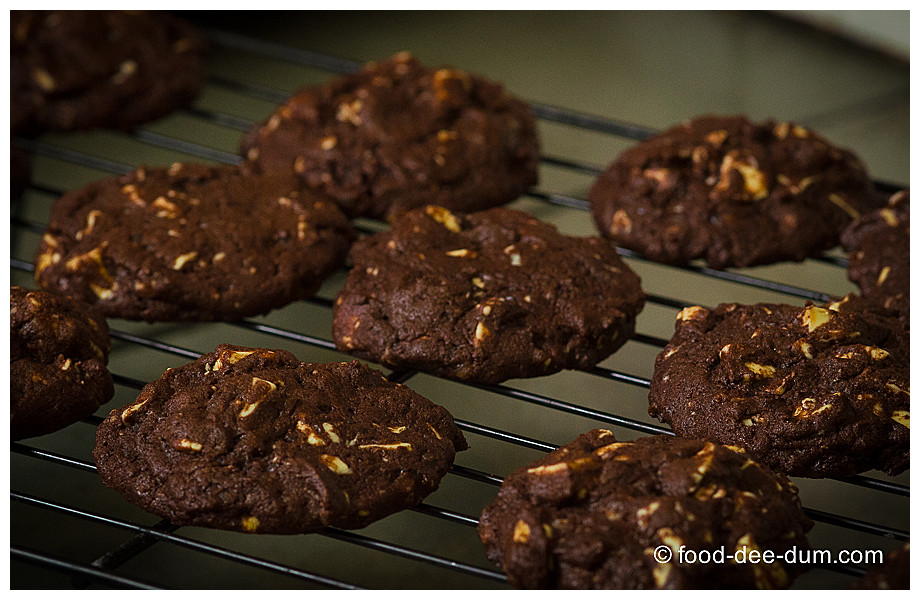 This past Sunday was a bit of a maddening day in our home — from a re-arrangement of furniture and cleaning overhead storage closets point of view. It was one of those days where, by the end of it, all good sense and restraint about “sensible eating” was tossed out the window. You know the kind I’m talking about? I’m sure have them, too, sometimes. Mine are usually very few and far apart. But Sunday was definitely one of them.

There were indulgent cookies, a whole cake and take out Chinese. Oh, and beer. And this is just the post 7 pm consumption. I don’t even want to get into the rest.

You see, I have this odd condition where I actually like stuff that has low sugar, less oil, more fibre, more veggies/ salad/ fruit. I’m not exaggerating. I’ll pick a soup over a crispy fried dish, any day. A stir fried chinese greens with soy or a steamed fish over a chicken or lamb in thick gravy.  Dimsum or sushi over spring rolls and crispy honey potatoes. Phulka over parantha. Don’t get me wrong. I’m not saying that I don’t like pakoras and samosas and paranthas etc. But I rarely crave them. I’m not sure how “healthy” or nutritious my food choices really are, but that’s the way that they have evolved over the years.

My Achilles Heel is rice, though. Give me a bowl of hot dal chawal or even khichdi and I lose all sense of quantity control! And Maggi noodles are a must on road trips — copious amounts of it. And I WILL gobble a whole bowl of chips or nachos if you place them before me with tea or a drink. I’m not a saint, you know! But you get my drift.

It’s come to a point where I have a reputation and AK and my MIL don’t even bother to offer me a square from their respective bars of chocolate anymore. Recently, one of them announced after dinner that “Praeru doesn’t like chocolate anyway” and counted me out automatically. I found it very hard to explain that I actually LOVE chocolate – just that I choose to not waste my time on milky and super sweet chocolate. I choose dark chocolate — more chocolate, less milk and sugar.

As you probably know by now, AK is the opposite. If it has sugar and/ or is fried, he’s in! He has been bugging me to bake White Chocolate Chunk Cookies for weeks. I just kept putting it off. Not because I don’t like cookies or chocolate. But because my oven & cookie trays are relatively small and I have to make them in many batches. I hate that and how. I wish I had a giant oven into which I could stack various trays of cookies, or 2-3 tins for a layer cake. So I just make excuses for as long as I can!

But this past Sunday, after much cajoling and bribes from the unrelenting husband, I gave in. I decided I’d go for a double whammy — chewy chocolate cookies with white chocolate chunks. How much more chocolate could a boy ask for? Actually, I take that question back. I don’t think I want to know the answer. I didn’t have white chocolate at home so AK willingly went with a nice long grocery list to get me everything I needed. That boy will walk barefoot across the desert for chocolate. I think. Maybe it’s better that we don’t test that theory. What do you think?

1 cup all purpose flour
1/4 cup cocoa powder
1/4 tsp baking soda
1/2 cup castor sugar (you can use regular powdered white sugar or small granulated sugar — the granulated sugar in India has huge grains so avoid that)
1/4 cup brown sugar (this is a nice addition but if you don’t have it, go for all white sugar)
1 egg
1 tsp vanilla extract
1/2 cup softened butter
200 gms white chocolate, chopped and refrigerated till needed (you can also use store bought white chocolate chips)
Pinch of salt (if you’re using unsalted butter)

Turning on my oven on at 180 C to pre-heat, I lined two cookie trays with butter paper and got ready to make the dough.

I placed the flour, cocoa, baking soda in a bowl and whisked them to combine. If you’re using salt, then add it now. 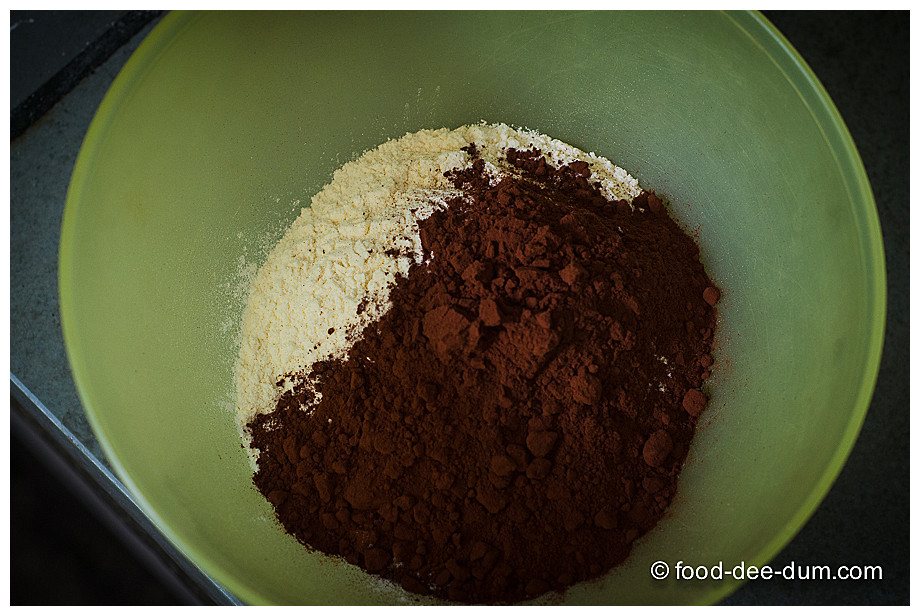 Cubing the softened butter, I beat it using an electric stand mixer for 1 minute on high speed till it was smooth. 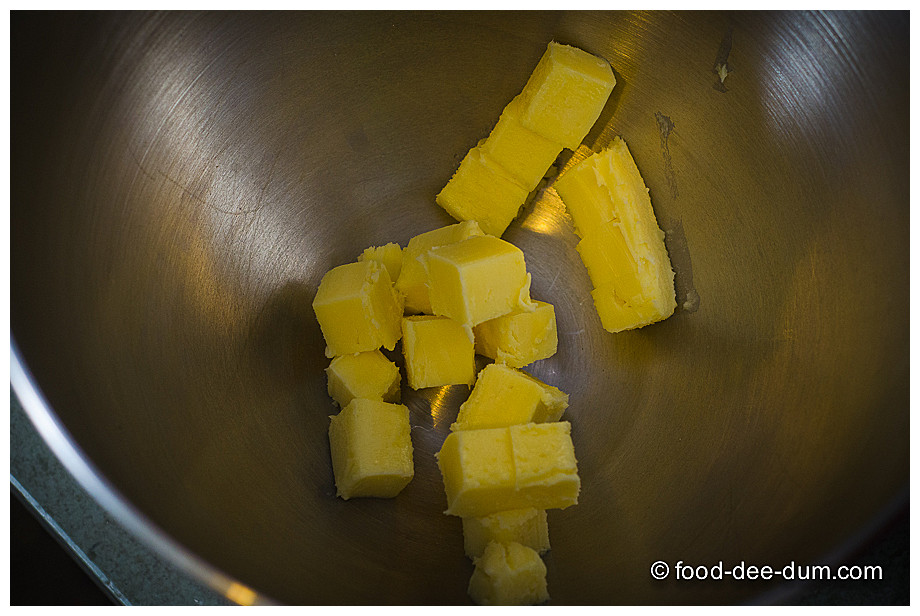 Once it was smooth, I added the sugars and beat again on high speed for 2-3 minutes until pale and fluffy. 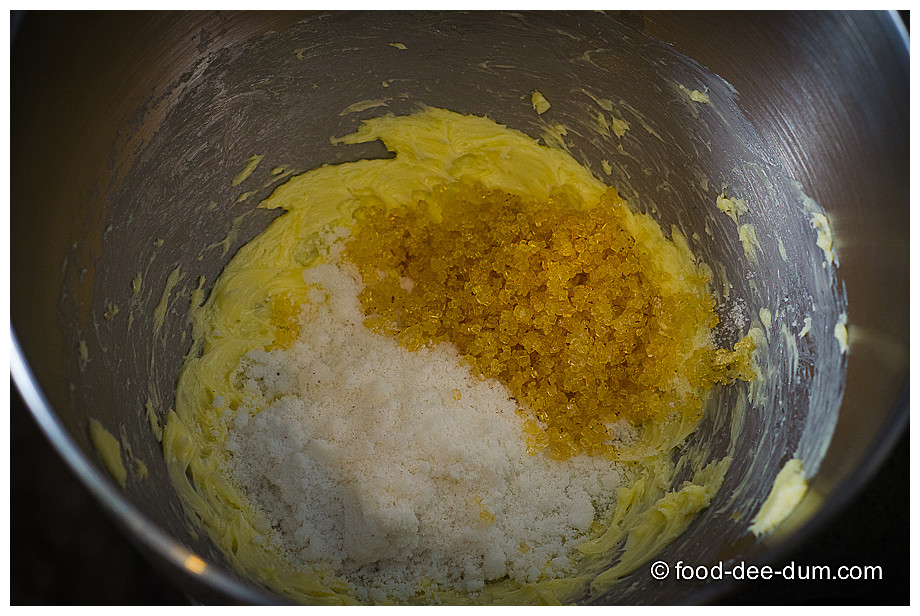 Next came the egg and the vanilla, which I beat on medium speed for a minute. 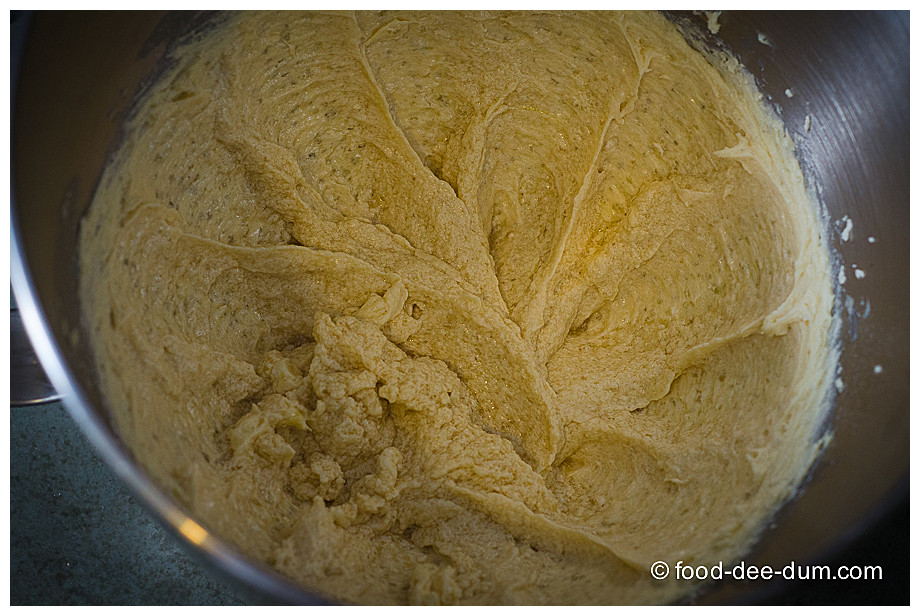 Removing it from the stand mixture, I used a wooden spoon to stir in the flour mixture. 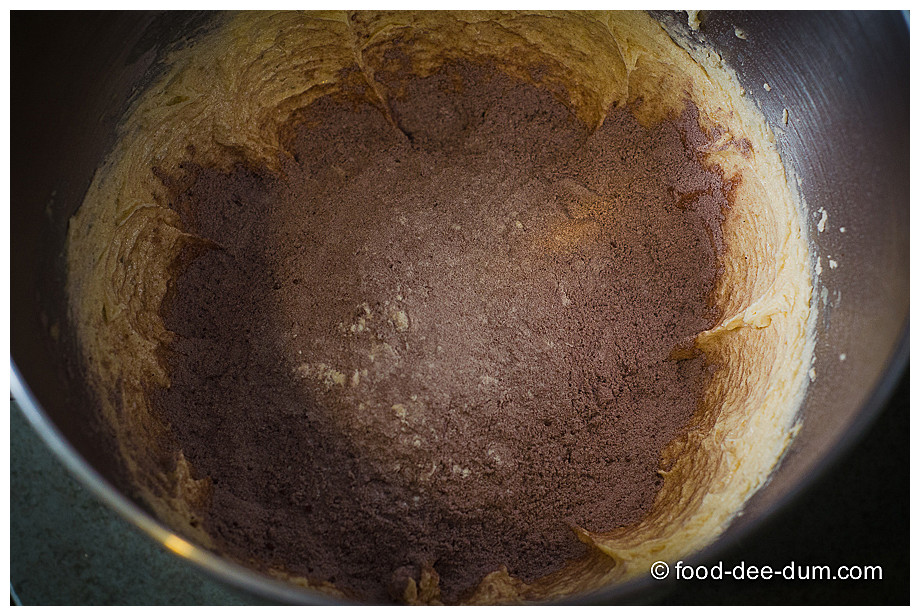 And finally the white chocolate – take care not to work the dough too much after this point because the chocolate chunks will soften and become melty. 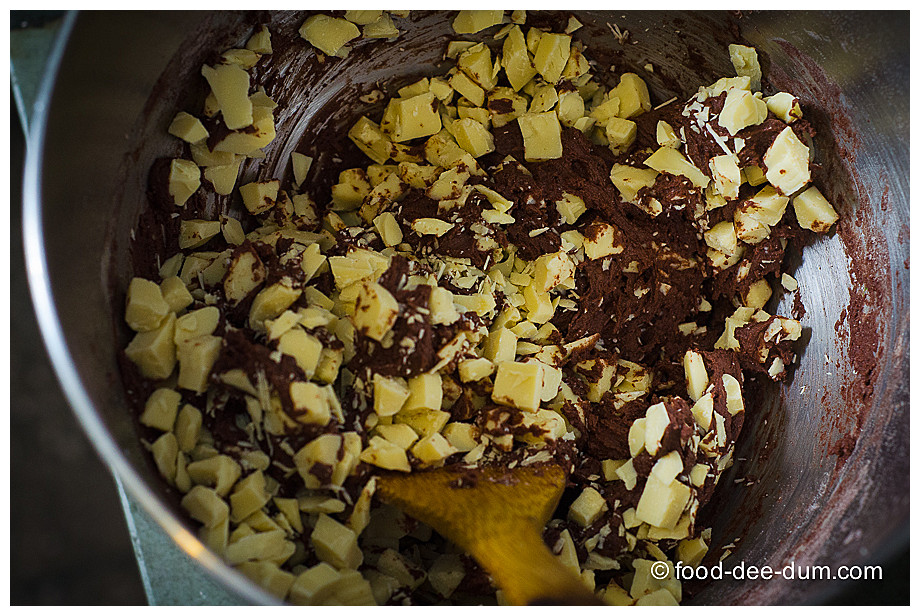 To bake, I placed heaped tablespoon mounds of the dough — 2″ apart — on the paper lined trays and popped them in the oven. (By the way, I think this dough may yield more than 15 cookies because I’m positive that AK sneakily ate up 3 cookies worth of dough while passing through the kitchen. But I can’t prove it. This time.) Also, while I’m wishing for things, I may as well wish for a cookie scoop – put an end to this “heaped tablespoon” and getting-my-hands-greasy business. 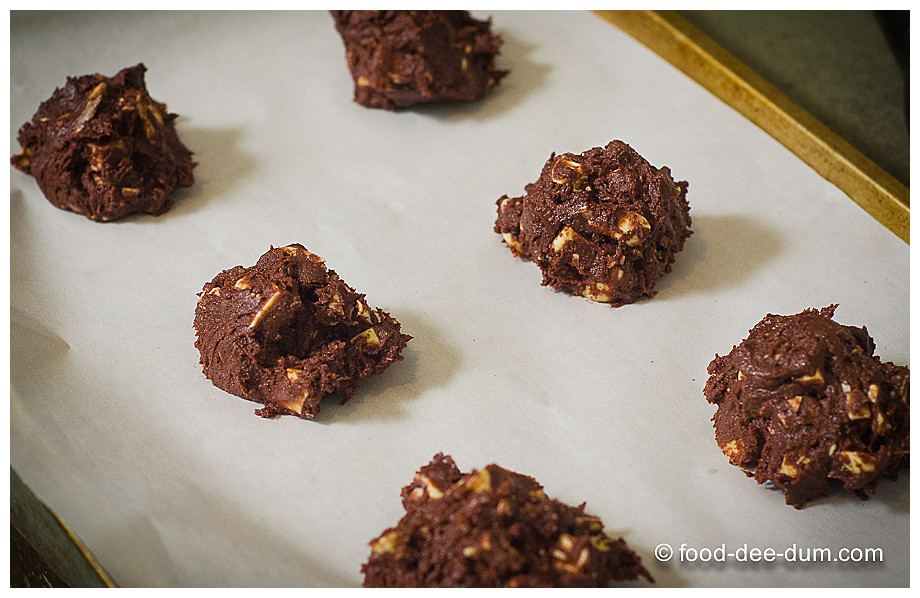 I baked each batch for about 9 minutes — they should be set at the bottom and edges but still soft on top and in the middle. Taking them out of the oven, I let them cool on the baking tray for about 10 minutes. 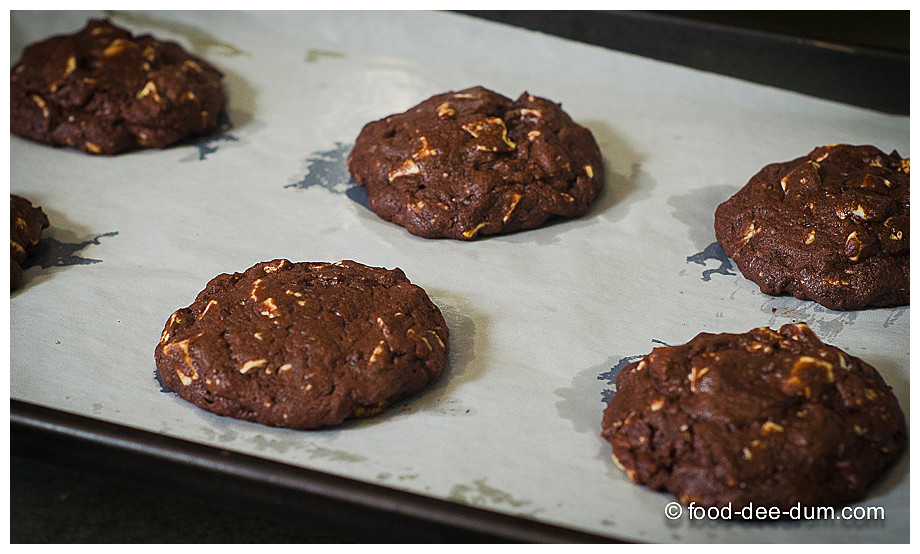 That’s it. Done. Eat them as is, or crumble over ice-cream or dip into a glass of milk. Store them in an airtight jar and they will last 4-5 days, if you don’t finish them off first that is. 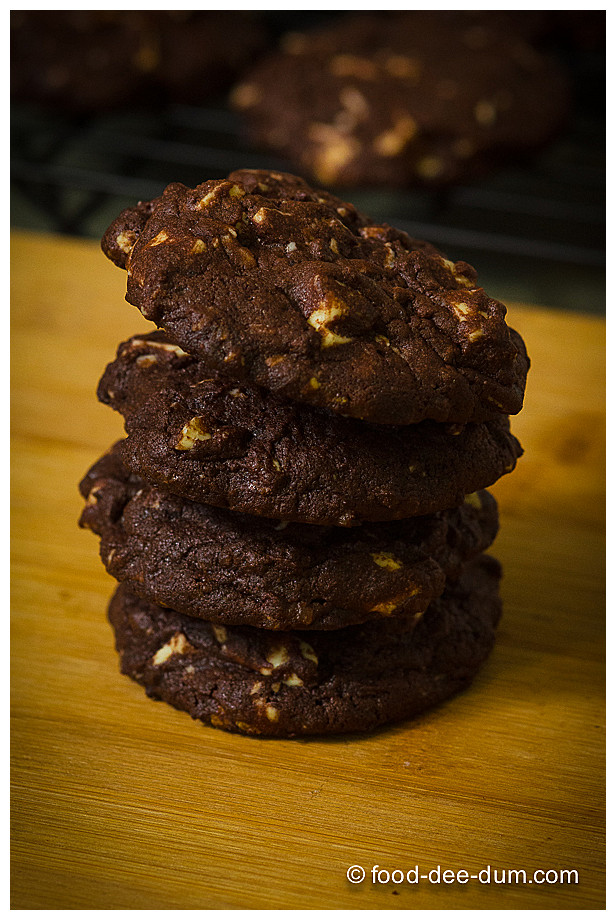