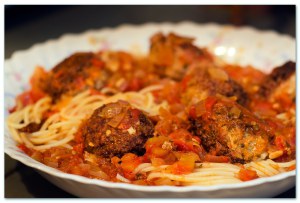 Before this past weekend, I used to think making meatballs is such a nightmare. They would always fall apart while I cooked, making them more of a meat-mash than meat balls. But I learned a simple trick from my cousin Vinay (although he was making burgers from scratch, the principal and method is the same).

I’ve decided that, for me, meatballls and spaghetti are the ultimate form of comfort food! It reminds me of my childhood days when my Mom would spend more time & effort on this than making “meat-sauce” (essentially Bolognese).

This particular post is slightly low on pics because I began making these at 10 pm and AK was TOO hungry and tired to take more than a few. So I decided to focus on what’s important…

For about 10-11 (slightly larger than) golf-ball sized meat-balls, this is what I used:

400 gms mince meat (I used mutton but you can use any meat you like – chicken/mutton/pork/beef)
2 tsp garlic paste
1 tsp salt
1 tsp red chilli powder
1 tsp dried herb (I used oregano, but it depends on what you’re feeling like!)
2 eggs
1/2 cup breadcrumbs (approx)

I mixed the meat with all the seasoning. Then cracked in the eggs and gave it another good mix. And last came the breadcrumbs. Now here, you need to use a little bit of your judgement. Although I’ve written 1/2 cup, please add slowly while mixing. The mixture should be just dry enough that when you roll it into a ball, it doesn’t fall apart (think of aloo tikkis and cutlets – moist but holding shape).

Shape these into whatever sized balls you like, depending on how much you want to make and place on a plate.

Then here’s the trick – pop them into the fridge for about an hour. They’ll hold their shape when you fry them!! Alternatively, if you’re in a  hurry (which I wasn’t because I went birthday shopping for my Mom between marinating & frying), then you can pop them in the freezer for about 15 mins, while you get sauce ingredients ready. This is what mine looked like after refrigeration…

You can make these even more interesting by adding a splash of red wine or bourbon. I didn’t do either as I didn’t have an open bottle of the former and AK favours scotch over bourbon so we usually don’t have it in stock. I think it’s time to rectify that. I promise you that a splash of bourbon in meatballs or burgers will take this to another level altogether!

Anyway, back to the subject. I then heated some oil (regular vegetable oil will do) for shallow frying in a pan. Ensure the heat is on medium else the outside will brown/burn faster than the inside will cook. Also, using a pan that has a lid will result in more evenly cooked meatballs.

I usually cook them for about 6 minutes on each side. Common sense says that if the meatballs are chicken or smaller in size, then they will cook faster. You need to find the optimal cooking time on your stove…

Here’s a pic of them after about 2-3 mins on one side.

The meat will also let out some of it’s own grease and some little bits might fall off and cook faster/burn. Don’t worry about that. Just try and remove all the leftover bits between batches. I had to make mine in 2 batches – 5-6 at a time.

So after 5-6 mins, you want to flip the meatballs. The done side will look something like this…

When all of them are done, place them on a plate lined with a paper towel to drain off the excess oil…

You can make the sauce while the meatballs are cooking, depending on your capacity and enthusiasm to multi-task. Or you can do everything one after the other. But this is how I did it…
I put a pot of water on the stove to boil, for the spaghetti. Add a tablespoon of oil and a tsp of salt to the water. When the water starts boiling, break and add the spaghetti and cook for as long as it says on the packet. (Essentially, follow the directions on the packet for this step as I don’t have much value to add to this step!)

I had chopped up about 6 tomatoes while the meatballs were cooking. And I smashed up 4-5 cloves of garlic. That’s all the prep I needed for the sauce.
In  a pan (with a lid), I heated up 2 tbsp each of butter and olive oil. When the butter melted, I added the smashed garlic and 2 whole dried red chillies, broken in half.
After frying for 1 minute, I added the chopped tomatoes, mixed it up and covered the pan. Lower the heat to medium at this point. Occasionally, the lid needs to be raised so the sauce can be stirred. It will take approx 15-20 mins to cook. Which is perfect because that’s as long as it will take for the meatballs. When your sauce looks like this, it’s time for the next step…

This step is all about cheating!! (I love cheating!)
Since the tomatoes I had at hand, lacked the nice rich colour, I added 2 tbsp of pakaged tomoto puree. You can add puree/ tomato ketchup (plain kind)/ store bought pasta sauce (the cheap Fun Foods type as they have all these colouring agents…)
Next cheat: as these tomatoes were not the most flavourful, I smashed up one cube of maggi chicken stock (also available by Knorr and other firang brands) and mixed it with 1/2 cup of boiling water before adding it to the sauce.
If you want, you can add a splash of wine/bourbon at this stage. (If you already added wine/bourbon to the meatballs, then add the same here. Don’t mix it up. You can add at this stage even if you didn’t in the meatballs. Or not at all. OMG all these choices are killing me…)
Add some fresh ground black pepper (1/2 tsp) and some more of whatever dried herb you used in the meatballs. If you have access to FRESH herbs, don’t even hesitate to use them instead of dried!
Cover and cook for another 5 mins and then dump in the meatballs… Cover and cook for 5 mins & it’s done!

I had made about 11 meatballs, but chose to use only 6. I packed 5 away in a ziploc bag and put them in the freezer to be used for meatball sandwiches later in the week!!
While this was  happening, I sorted out my veggie fix! As much as I love meaballs, need some veggies to counter all that meat! I quickly chopped up a carrot, some green beans and threw them in the microwave steamer basket along with frozen corn kernels. I usually do beans for 3 mins and then add the rest for another 3 mins!

Season this as you like. I added some salad seasoning that I had. You can use a pat of butter with pepper and dried herbs. Or a vinaigrette dressing. Or just some salt, pepper & lime juice.
Time to assemble the dish… It made me so hungry just sniffing all the garlicky-herby aromas…
Place the cooked spaghettin in a dish…

Spoon the meatballs & sauce on top…

Give it a little stir and dig in!

Oh & don’t forget to sprinkle some cheese on top. Parmesan works best but use anything you like. Regular Amul/Britannia cheddar will also do. I forgot to get a pic of the cheese on top 🙁

For the finishing touch, AK got 2 glasses of this yummy gin and tonic ready! It’s not the most ideal drink for dinner, but I love it! And since I cooked dinner, I get to place my drinks order the way I like it!

(Real reason: I wanted to get rid of the 2 leftover bottles of Catch tonic water so I could make way for the carton of the obviously superior Shweppes tonic we bought that day!)

All in all, a weekend very well spent!

PS – the meatball mix can be used to make burger patties too. Just shape them like cutlets instead of balls and grill/ bar-b-que/ shallow fry/ bake them.