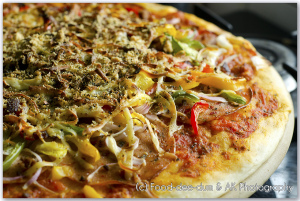 Saturday was Pizza day as my Mom-in-law was very upset that she hadn’t had any ever since I got my hands on the new pizza stone! I’m adding another post on the same subject because it turned out much better than the last (recipe post here)! These were the improvements:
Like I said, it was much better this time…I don’t mean to be repetitive with my posts and subjects. But last time, I couldn’t detail out the dough-making since I began the blog after the dough was ready! So here are detailed instructions and photos for the dough and the sauce…

For the dough, I used:

2 cups flour/ maida
¼ cup olive oil (technically, this is half of the original recipe so half of 1/3 should be 1/6th but I don’t have a measuring cup that size. I just put ¼ for convenience sake!)
¾ cup warm (not hot) water
½ tsp salt
½ tsp dry active yeast

I sprinkled the yeast over the warm water and let it sit while I did the rest.
I mixed the flour and salt in a bowl. Then I added the olive oil.

I mixed it with the dough hook till it became a little crumbly, like this…

Then I added the water and mixed it again until it came together in a sticky, stretchy mess!
I then took it out of the mixing bowl and kneaded it a little bit on the counter with my hands. Having rolled it into a ball, I put it back in the stainless steel bowl which I had greased slightly with olive oil.

Since I made the dough on the same day this time (instead of 3 days advance as I usually do), I warmed my oven slightly (about 50 C) for 10 mins, then turned it off and placed the dough in the oven covered by a damp tea towel/ cloth.

After 3 hours, it had risen and looked liked this…

While the dough was rising, I made the sauce.

I took the tomatoes, washed them and plopped them in boiling hot water for 15 mins. To clarify, I didn’t BOIL the tomatoes. I simply boiled a pan full of water, turned off the stove and plonked the tomatoes in them and put the lid on.
After 15 mins, I took them out and run them under cold tap water. Once they were cool enough to handle, I carefully peeled the skin off and chopped them roughly. No need to be precise/ even about this step because they’re going to get all mashed up anyway!

Next, I heated a medium saucepan on high heat. I heated the butter and olive oil together till the butter melted and became all foamy…

Then I reduced the flame to medium and added the minced garlic and dried red chillies (broken into 3 pieces each) to the pan, stirring for about 1 minute.

Next up, I added the squishy chopped tomatoes and gave them a good mix. I added salt and the oregano, stirred and put the lid on the pan.
I cooked it for about an hour on medium heat, stirring occasionally to ensure that the sauce didn’t stick/ burn. It generally won’t because a) we’re not allowing the water from the tomatoes to escape by placing the lid; and b) the combination of a non-stick saucepan, olive oil & butter won’t really allow it. But there’s no harm in playing safe! Burned pizza sauce wouldn’t get me any brownie points from the mom-in-law!
After about an hour, it looked like this. I removed the lid and increased the heat for about 5-7 minutes to allow the excess water to evaporate. Since the heat has been increased and water is being allowed to escape, it’s important to stir at this point.

Once it’s thick and creamy and most of the water has evaporated, it’s READY!!

(I’m going to keep this section picture heavy rather than instructions as this stage isn’t very different from the previous pizza!)
I pre-heated the oven to 250 C/ 450 F (bottom coil only) and placed the baking rack on the lowest rung. Then I cleaned and greased my pizza stone generously with olive oil. As I mentioned before, you can use a regular baking sheet/ cookie tray or any other non-stick flat bake-ware.
I plonked the dough on the stone and stretched it out thinly. No need to worry about perfect shape or even-ness. Just spread it as thinly as you can. Any holes that crop up can be pinched and pressed to close. I then added a dab of olive oil on the dough before the sauce. Next, I ladled the sauce and spread it out…

I added the salami…

Then the onions, peppers, jalapenos, olives and bacon…

I grated cheese on it (mozzarella & cheddar – both processed Amul cheeses). I also took out some parmesan cheese that I had and sprinkled it for flavour. (Fresh parmesan is a pain and super expensive to get so I found a mid-way compromise).

Lastly, I added a sprinkle of oregano & freshly ground pepper before popping it in the oven for about 50 mins.

This time, I stuffed the gap in the oven & oven-door (caused by my pizza stone being bigger than the oven) with aluminium foil to minimise heat escape.
For the last 5 mins I turned on the top coil too, just to allow some browning of the cheese. This is what we got…

Fortunately, it was good enough to stack up a whole load of brownie points! Mission accomplished